A distressed-baby-shaming CEO: What you can never expect when you're expecting

I already felt like I was to blame when my baby was born at 25 weeks. Then my husband's CEO called me a benefit hog 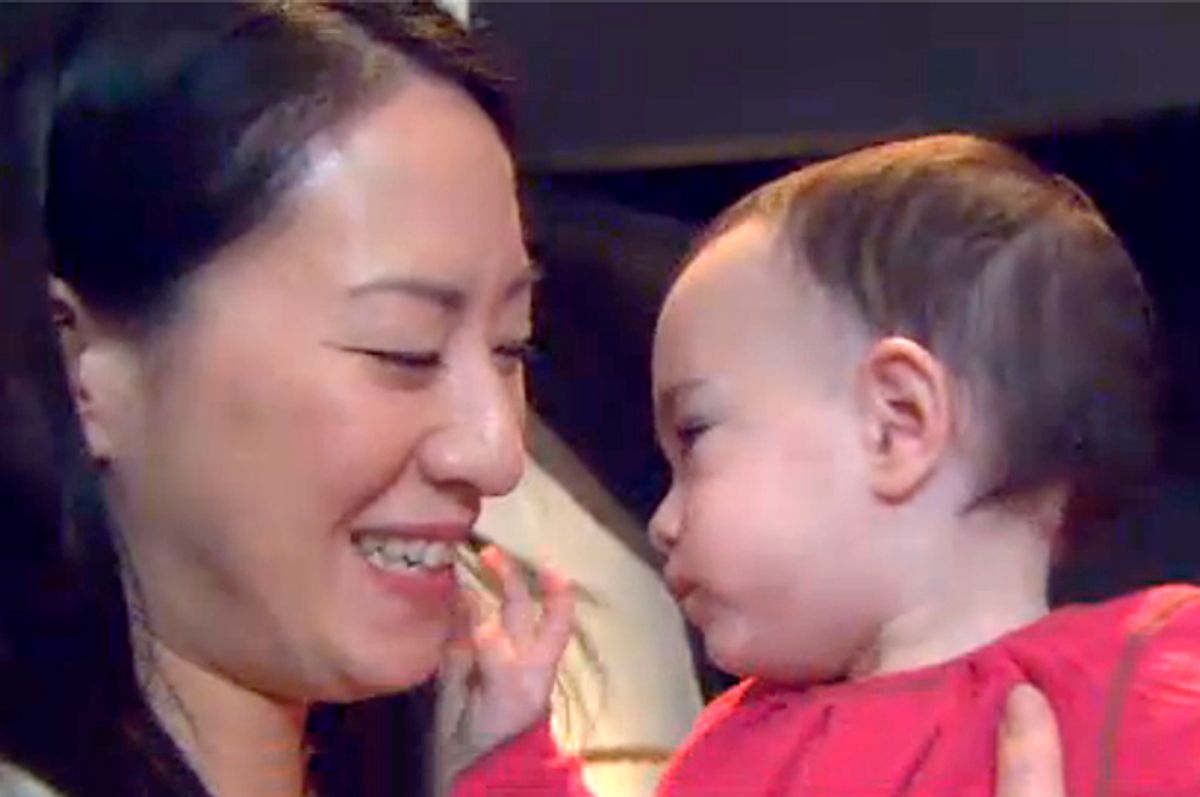 Then my brain became hostage to the insatiable demands of my body--ravenous, drowsy, needing to pee, all of the above simultaneously. I incessantly interrupted my work to research nursing pillows and baby carriers, sleepwalked from meal to meal, succumbed to feverish dreams about tiny aliens and fragile dolls.

I started to read the book and couldn’t stop. Nothing was more comforting than matching my symptoms to the official predictions, checking off every item on every checklist, confirming my fulfillment of every do and every don’t. Each pregnancy milestone became a chance to find out the next worry--Tay-sachs, preeclampsia, gestational diabetes--and vanquish it, with my dog-eared, notated copy of "What To Expect" as my talisman.

At exactly 40 weeks, I delivered my baby boy with a triumphant push. Here was my child, exactly the way he was meant to be: fat-cheeked, howling, radiant. I knew luck had played a part, but I couldn’t help feeling that I must’ve done everything right to have a baby as perfect as this.

One year later, just 25 weeks into my second, equally uncomplicated pregnancy, I woke up in labor. By the time I arrived at the hospital, I was fully dilated and the baby’s heartbeat was slowing. Within minutes, my daughter was delivered via emergency C-section. The doctors resuscitated her, attached her to tubes and machinery, and placed her inside a glass box. She weighed one pound nine ounces. None of her vital organs--her brain, lungs, heart, skin--were ready for the world outside my body.

Through the long, terrifying months that followed, as my daughter endured countless procedures and fought for every breath, I was haunted by everything I must have done wrong to cause my daughter’s catastrophically premature birth. Something I ate, something I touched, something I thought.

As with my first pregnancy, the results of every screening, every test result, every prenatal exam had been perfect. I’d had no risk factors and the doctors had no explanations, so I could only blame myself. No matter how my husband tried to reassure me, no matter that the literature on prematurity acknowledged that a birth like my daughter’s was no one’s fault, I couldn’t shake the sense that I was a failure of a mother.

I had failed to keep my child safe. I had failed to hold onto my own baby. Even after I brought her home and she seemed to thrive, I continued to castigate myself. In some ways, this was easier than accepting the stark reality that in pregnancy--as in life--sometimes disaster strikes without warning and without reason.

One year after I brought her home, just as she and I were finally recovering from the trauma of her birth, Tim Armstrong, the CEO of AOL--my husband’s then-employer--publicly claimed that the medical needs of two employees’ “distressed babies” had forced him to cut retirement benefits for all employees, disclosing details that allowed my husband’s co-workers to immediately identify our family and exposing everything I had tried to forget.

In Armstrong’s portrayal, I was not only a mother who had failed my child, I was a woman who had wantonly consumed an outsize portion of health benefits, imposed a terrible burden on a large corporation, siphoned off other people’s retirement savings. Many observers were apoplectic about the fact that Armstrong had violated the privacy of individual employees, but at first, I found myself so steeped in shame and guilt that I told myself I had no choice but to suffer in silence.

Then, as Armstrong’s comments resounded again and again amid a media firestorm, I began to question his accounting. Yes, the care of an extremely premature infant is costly, but so is treatment for a heart condition, chronic back pain, a spinal cord injury. Why had my daughter and I been singled out for a public shaming? What had I done wrong other than experience a medical emergency?

I realized I needed to speak out to defend myself and my daughter’s basic humanity. After I published a column in Slate that went viral, I received an outpouring of messages from strangers across the country who had been targeted as burdens for suffering medical crises--especially mothers who had also been stigmatized for having sick babies, whether due to prematurity, a difficult labor, a virus, an infection, or any of the myriad reasons that children sometimes need medical attention.

Many of these mothers co-opted the phrase “distressed babies” with dignity and pride to connect over traumas that had once seemed unspeakable and to bring home this central truth: Each child is all of our children. As I absorbed their messages of support and solidarity, I finally began to absolve myself. Of course none of them were to blame. Why was I any different?

My daughter’s premature birth upended everything I thought I knew about how life is supposed to begin: the triumphal perfection, the quintessential and ordinary miracle in the birth of a healthy baby. But it also taught me about motherhood at its most elemental.

We all want to believe that in the primordial business of bringing new life into this world, we know what to expect. But parenthood doesn’t come with any guarantees. The fundamental challenge for every parent is to embrace the ultimate unknowability at the center of life as part of the miracle of it all.

These days, my daughter is a healthy, indomitable toddler, and no one who meets her now would suspect the nature of her arrival in the world. At the same time, friends and relatives who know a little about her birth--especially those expecting babies themselves--sometimes can’t help raising the possibility that I must have had high blood pressure, low blood pressure, rheumatoid arthritis--as if there must have been a way to see disaster coming, if not to avert it completely.

I can’t blame them. Every now and then, I still feel pangs over the slight breathiness in my daughter’s voice, a pale scar beneath her heart, all that she has overcome to reach the milestones most children take for granted.

But there’s also a singular transcendence to the simplest moments that, at the start of her life, I didn’t dare to expect: when she laughs in the swing with the wind ruffling her hair, when she stuffs cookies into her mouth faster than her big brother, when she shouts, “Mama, I can see the moon!” I still wish that I could protect her from what she suffered, and yet all I want is for her to be just the way she is.

Deanna Fei is the author of "GIRL IN GLASS: How My Distressed Baby Defied the Odds, Shamed a CEO, and Taught Me the Essence of Love, Heartbreak, and Miracles" and the award-winning novel "A Thread of Sky." A graduate of the Iowa Writers' Workshop, Fei has received a Fulbright grant and a New York Foundation for the Arts fellowship. Her essays have appeared in The New York Times, Slate, the Huffington Post, and other publications. She lives in Brooklyn with her husband and two children. For more information please visit DeannaFei.com and OurDistressedBabies.org.