Biden 2016 is a media fantasy: Why he's almost certainly going to sit the race out

Joe Biden probably isn't running for president, despite the latest round of Maureen Dowd-fueled speculation 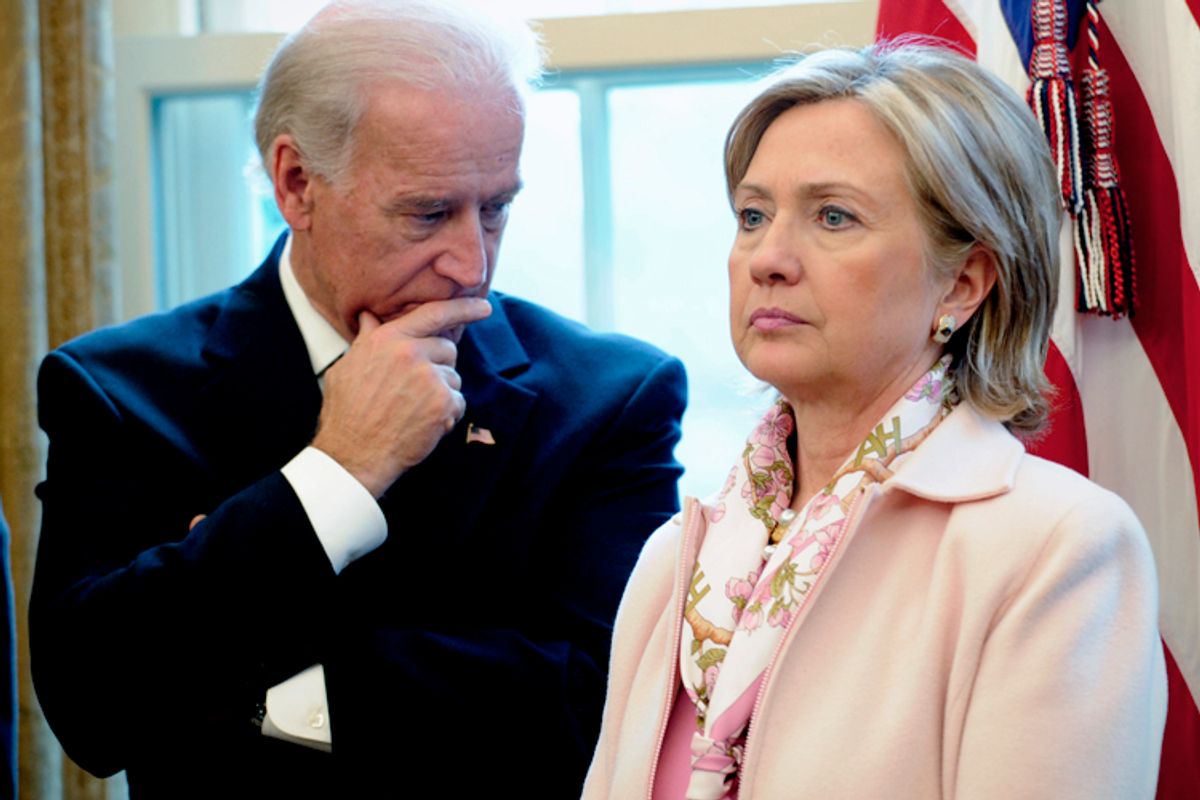 You have to hand it the starry-eyed dreamers who are pulling for a Joe Biden 2016 presidential campaign – they really know how to pick their moments. Right now the political press is very happily concern-trolling Hillary Clinton’s campaign in the face of some softened poll numbers and renewed squabbling over her emails. The time is ripe to exploit the “is there a Plan B for Democrats?” narrative, and the pro-Biden camp took full advantage, leaking some deeply personal information about the vice president’s 2016 ambitions to one of the most prominent anti-Hillary voices in the media: Maureen Dowd.

Dowd’s New York Times column from this weekend is, in most respects, nothing you haven’t seen before. She doesn’t care for Hillary and she expressed that dislike through a strained cultural metaphor – in this case, a comparison to Patriots quarterback and suspected ball deflater Tom Brady. Beneath ten paragraphs of overwrought Clinton-Brady prose (and some unsourced scuttlebutt about Starbucks CEO Howard Schultz maybe considering a run) Dowd finally got around to writing something interesting, offering an account of a conversation Biden had with his son Beau, who recently died from brain cancer:

When Beau realized he was not going to make it, he asked his father if he had a minute to sit down and talk.

At the table, Beau told his dad he was worried about him.

My kid’s dying, an anguished Joe Biden thought to himself, and he’s making sure I’m O.K.

“Dad, I know you don’t give a damn about money,” Beau told him, dismissing the idea that his father would take some sort of cushy job after the vice presidency to cash in.

Beau was losing his nouns and the right side of his face was partially paralyzed. But he had a mission: He tried to make his father promise to run, arguing that the White House should not revert to the Clintons and that the country would be better off with Biden values.

Hunter [Biden] also pushed his father, telling him, “Dad, it’s who you are.”

The basic information here isn’t new – the Wall Street Journal quoted Democratic insider and fervent Biden backer Dick Harpootlian over a month ago saying “It’s no secret that Beau wanted him to run.” But the detail Dowd provides is new, and that leads to the question of who Dowd’s source is. She quotes Joe Biden and describes his thoughts, which at first glance would seem to indicate that Biden himself passed along this information. But that’s not necessarily the case – you have to remember that this is Maureen Dowd we’re talking about here. She specializes in pretending to crawl inside people’s heads. In February she wrote a column describing Mitt Romney’s mental reaction to seeing the documentary “Mitt,” though it was clear she based her descriptions of Romney’s thoughts on conversations with his friends and associates. So when it comes to Joe Biden, she could be describing what Biden told her, or offering a third-hand account of a conversation between the vice president and his dying son.

Regardless of its source, this new information has sparked another round of Biden speculation that swirls around the idea that he would be well-positioned to capitalize on voters’ reservations about the current frontrunner. But to me, at least, this feels like the pro-Biden camp keeping his name in the mix just for the sake of it. And I think the Romney example is instructive in this case.

As you probably recall, speculation about a third Mitt Romney presidential run peaked earlier this year, helped along by hints and unsourced rumors from people inside Romney’s orbit, and even by Mitt himself. The pro-Romney pitch also touched on the perceived weaknesses of the candidates favored by the Republican establishment: Chris Christie (scandals and low approval ratings) and Jeb Bush (his last name is Bush). And Team Mitt kept the routine going right up to the bitter end, even convincing a few reporters that Romney really was going to announce a run. They saw obvious value in keeping alive for as long as possible the possibility of a presidential run, and it’s likely that Biden’s people do as well.

If it were still January, then perhaps a stronger argument in favor of a Biden candidacy could be made. But we’re now into late summer, and Biden has spent negligible amounts of time in early primary states, he has no campaign infrastructure, and he has no staff lined up. The Draft Biden political action committee that is leading the pro-Biden effort has raised $110,000 since March. To put that in perspective, Priorities USA Action, the chief super PAC backing Clinton, raised nearly $16 million in the first half of 2015. The Clinton campaign itself raised $45 million in its first fundraising quarter.

If Biden were to jump in, he would be facing a well-liked and well-financed opponent who already has much of the party establishment lined up behind her. He’d coming in very late, and he’d have to build a campaign basically from scratch. And as Paul Waldman points out, Biden has many political gifts, but running for president isn’t one of them. He’s done it twice now, and both times he’s come up well short of the nomination. I suppose it’s still possible that he’ll mount a candidacy, but you have to think that if Joe Biden was serious about running for president, he’d be running already.