"Fat Guy" biking across America: Why we believe only thin people deserve to be loved 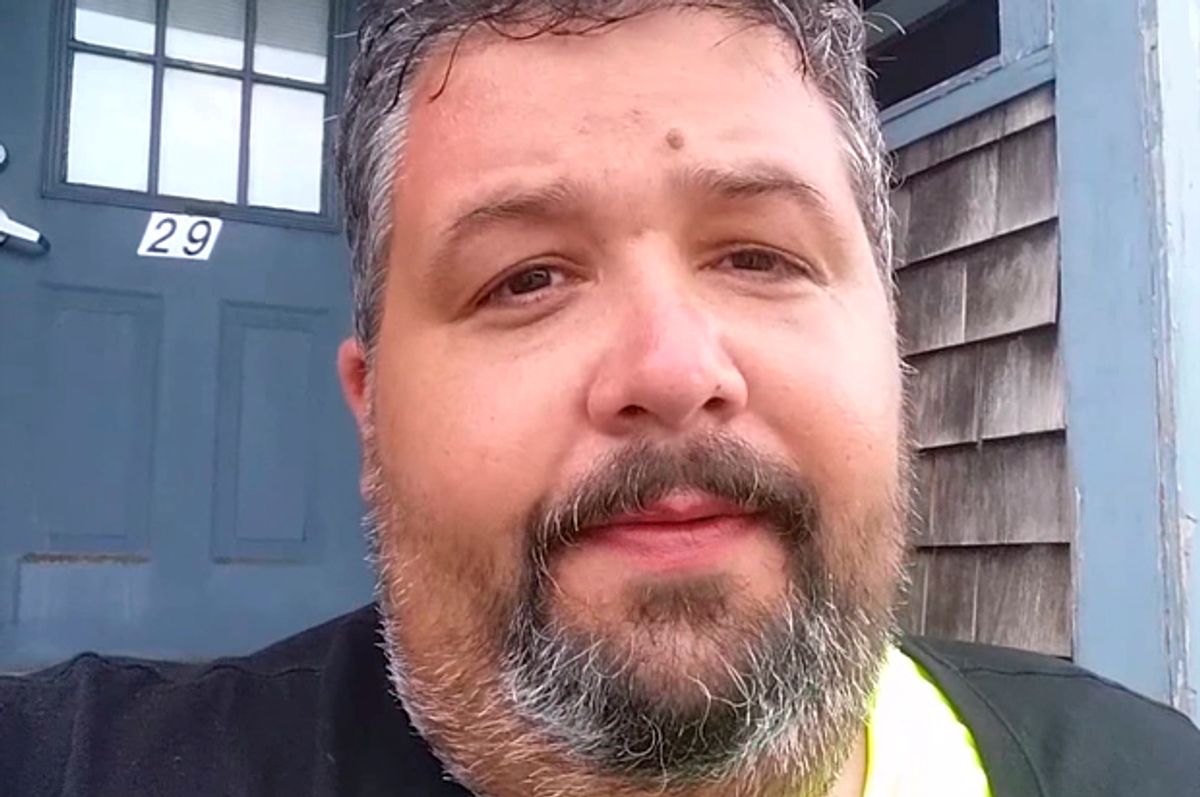 Recently, comedian Amy Schumer said, “I’m probably like 160 pounds right now, and I can catch a dick whenever I want,” at the Glamour U.K. Women of the Year Awards. She followed this up in an interview for a Glamour cover story by saying, “I’m proud of what I said. I think it’s good to see somebody saying: I have a belly. And I have cellulite. And I still deserve love. And to catch the old D.”

Schumer was widely praised for advancing the conversation around size and body acceptance, as she should be. But what if you’re more than 160 pounds—like 500 pounds more? Do you still deserve love, whatever your size?

That’s the question I was thinking about when I came across headlines about Eric Hites, who launched the blog Fat Guy Across America to chronicle what he hopes to be a life-changing bicycle journey. His plan is to bike from the East Coast to the West Coast with the dual missions “to prove things to my wife and my love” and “to take back my health and to lose the pounds I have collected over the years.” For his pro-active approach, I applaud him.

But his story is a lot more complicated than his weight, or most of the news stories about him, would lead you to believe. An NBC News story was titled "600-Pound Man Bikes Coast-to-Coast to Save Marriage, Lose Weight.” People went with, “’Fat Guy’ Plans to Bike More Than 3,000 Miles to Get His Wife Back.” The New York Daily News wrote of Hites, “As his weight ballooned, his marriage was crumbling to pieces,” and quotes him saying, “I was just failing as a human being,” without any context about how, exactly, he was failing. The implication is that his weight is enough to let us know he was a failure—but the real story behind the issues in his marriage prove he had deeper issues. As he put it in a recent blog post (one that, I should note, was posted after the first flurry of media reports, in response to reader criticism of his wife), “I was not left because I was fat, it was because I was a jerk and lazy.”

Hites detailed some of his failings in that same post:

My wife and I separated last July for many reasons, money, issues at home etc. both of us were pains in the rear. I was a slob, borderline hoarder that was so over weight and unhealthy, I could not hold or get a job. I tried but, It would just not happen. So instead of working to get healthy, I tried to start businesses at the cost of my parents and eventually my father n law. I got sicker, grew depressed, kept secrets about money and kept things from her. I tried, but not as hard as I should. I should have tried to get healthy but I didn't, I sat there and did nothing.

Yet it’s far easier to assume that his weight was the culprit, and that, by extension, once he loses weight, he will be worthy of love. According to activist Virgie Tovar, creator of the Lose Hate Not Weight hashtag and editor of "Hot & Heavy: Fierce Fat Girls on Life, Love & Fashion," equating thinness with worth isn’t new. “The news coverage of Eric’s bike ride is in conversation with this bigger American redemption motif, which is grounded in some of the same belief systems upon which diet culture pivots,” Tovar told Salon. “The idea is that fatness is indicative of personal immorality, and that fat people need to redeem ourselves through weight loss. Discussions of marriage and discussions of weight loss share some of the same lexicon, such as ‘being good’ and ‘cheating’ (on a spouse or a diet). Cultural expectations around marriage and body size go back to the Protestant obsession with discipline, merit and morality. I think there is a strong cultural belief that an immoral person—in this case, a fat person—does not deserve to have access to love or the sanctity of marriage because those are things we ‘earn’ though discipline, merit and morality.”

While Hites is certainly media savvy enough to have crafted a plan both to capture his wife’s attention and the world’s, the way his story is being covered only emphasizes the dangerous idea that losing weight will make you happy, healthy and solve your problems. It’s a seductive narrative, of course, because who doesn’t want a happy ending? We love to see a hero go out on a quest like this; it speaks to pulling yourself up by the bootstraps—or in this case, bike pedals, and makes it sound like we should be nodding our heads and saying, essentially, of course a 560-pound man would have trouble keeping his marriage alive. But the subtext of stories that imply weight loss will “save” his marriage to both the Hites and the topic a disservice.

According to body acceptance coach Lauren Marie Fleming, these headlines aren’t actually supportive of Hites as a whole person. “’600 pound man bikes across country to save marriage’ puts his weight first, makes him a number, and dehumanizes him and his experiences,” said Fleming. “I'd love to see a headline that left out his weight and instead focused on his emotional, physical, and spiritual journey instead, something like ‘Man Rides Across Country to Overcome Obstacles in Love and Life.’ Now that's something I'd read and share.”

Fleming feels the focus on weight can obscure more important issues. “Many of the clients I see focus on their partner's weight gain as a reason they no longer find them attractive. It's easy to see why; we as a society equate attraction and worth with thinness. But when I really dig down into their wants and desires, the weight gain is only an easy target, a visual vessel in which to place their harder to define relationship and life problems. Sure, Eric Hites may have gained weight as his relationship crumbled, and sure, he may lose weight on this road trip, but the real issues at play here have nothing to do with weight and everything to do with his overall dissatisfaction in life.”

Blogger and body love activist Bevin Branlandingham put it even more pointedly, calling the media focus on his weight “predictable journalism,” and highlighting the fact that exercise and weight loss are not synonymous or equivalent. “Our media loves to buy into the idea that losing weight will radically improve our lives because sponsors in the billion dollar diet industry incentive them to focus on that. The truth is you can get healthy without changing your weight,” said Branlandingham. “Lots of fat people do amazing physical things with their bodies, like Ragen Chastain, who is training for the 2016 IRONMAN Championship. The other truth is, everywhere you go, there you are. If he is just bicycling without working on the underlying issues at home that lead to his hoarding and keeping secrets, he's going to go right back there. My real question here is how is this man going to work on the underlying issues that lead to the lying and secret keeping, which are bigger dangers to a marriage than weight gain.”

Other recent stories of fat people in the news have focused on them standing up to bullies, another cause that seems easy to rally around. When photos of Liverpool’s Sean O’Brien being mocked online because of his weight went viral, the “Dancing Man” became an internet sensation, garnering a party DJed by Moby and a date with Dita von Teese. We were on board with Old Navy shopper Rachel Taylor using a selfie to stand up to being fat shamed.

We don’t want to think of ourselves as a culture that condones bullying or body shaming, but, at the same time, we also want to treat weight as a stand-in for everything that could be wrong with a person, which I’d venture is another version of fat shaming. To imply that Hites should lose weight to make him marriage material, without mentioning the other issues involved, doesn’t actually help people who do want to lose weight, it just reinforces the misguided belief that thinness equals health.

Reading Hites’ own words, it’s clear that he has many personal issues to work out for the sake of both his physical and mental health. I’m not trying to put down his approach or discourage him in any way. He made a catchy campaign and an actionable plan for himself that will hopefully give him a new perspective on his life and lead him toward the kind of future and relationship he wants—and should have.

I’m happy to see him—or anyone—trying something to help better their life. But I’m dismayed to see his story, which is full of human drama and relationship issues that go beyond weight, shoehorned into the too tidy idea that weight loss is a panacea. As Ragen Chastain, whom Branlandingham mentioned, wrote on her blog about training for the IRONMAN, “The idea behind the Good Fatty/Bad Fatty dichotomy is that fat people who do the ‘right’ things in the estimation of the person doing the judging deserve to be treated better than fat people who aren’t doing the 'right' things. Those of us who are involved in fitness/athletics/sport are often judged to be ‘good fatties’ and so we get a certain amount of privilege because of that.” Hites gets the added bonus of a romantic gesture.

The message the headlines emphasizing that Hites can “save” his marriage by losing weight imply that if he doesn’t lose weight, his marriage will fail, which is not necessarily the case. It might, or it might not, but again, his weight has not been the determining factor, his actions have. As Tovar put it, “Loneliness is a great human fear. It is only through sociality that we understand our own humanity. In Eric’s case, the news media descend upon this story with a headline that they know will resonate because it speaks to that fear. The story loses its nuance because he’s being made into an example of what happens to people who don't stay in line.”

As for how she’d like to see this story treated, Fleming said, “When Eric Hites ends his trip, I hope we can say ‘Man Finds Peace, Joy, and Grounding in Bike Ride Across Country,’ not ‘Man Loses Weight Riding Bike.’” I concur.