"True Detective" recap: A shocking death, a burning empire and a moment of comfort for Ani and Ray

The body count rises, but finally, some things in Vinci are becoming more clear 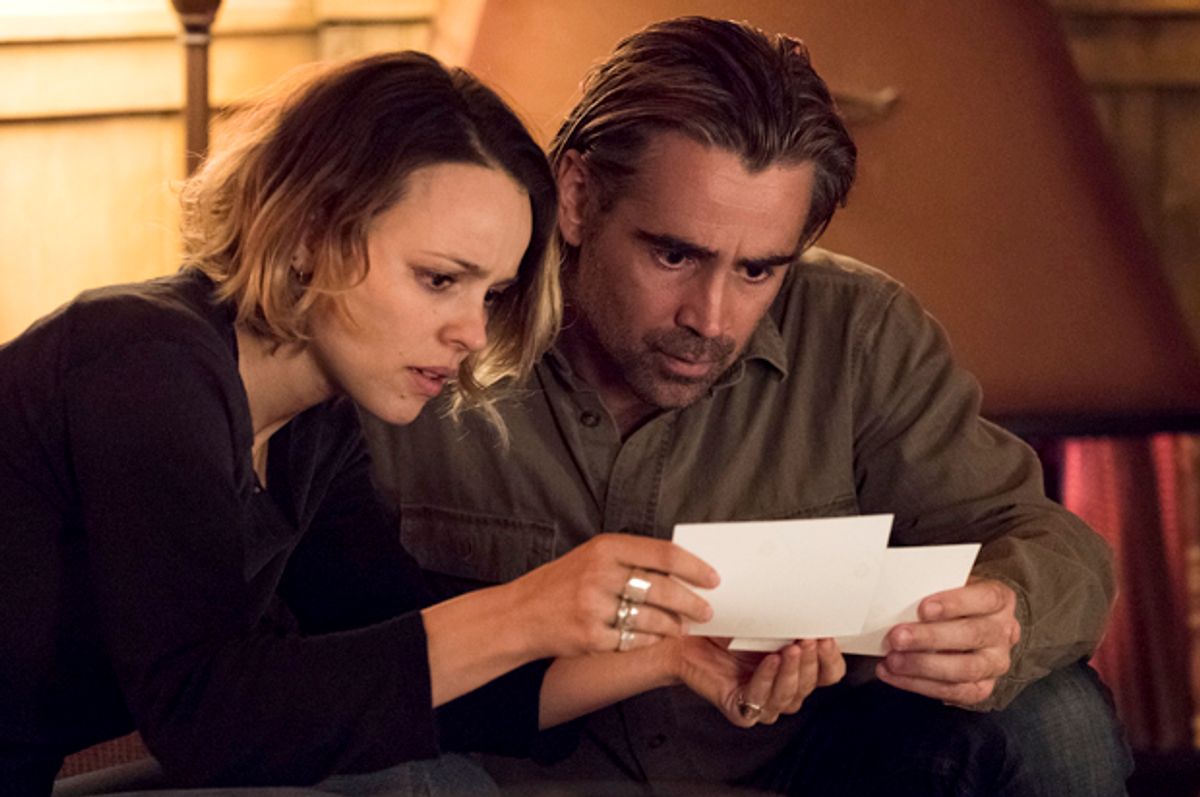 The dialogue this season is over-the-top nonsense, but the show is still weirdly engaging; “True Detective” is better when things are happening. The plotting of this season has been something of a joke—the landscape of Vinci and the characters populating it are sketchily drawn, when they’re drawn at all, and as viewers we’ve had to rely on bald-faced exposition just to muscle our way through the plot. The final scene of the penultimate episode of last season was a moment with two cops we barely knew running into a man in a pristine meadow that had scars all over his face. None of them knew that there was any import to the moment, but for the viewer, it was a punch in the gut; here is the monster at the center of the labyrinth.

The final scene of tonight’s episode, “Black Maps And Motel Rooms,” is not quite as lyrical, but it does have the same sense of labyrinthine horror—Paul rushes out of a maze of underground passages, only to turn his back on the last monster. So now Paul’s dead, a victim of both government corruption and his own homophobia. Before he goes, he delivers to the audience a stunning action scene, one of careful planning and assassin-like stealth. This is the aspect of Paul that has always been the most interesting: He is a professional killer trying to blend into the real world. That his fear of his own sexuality does him in—is his Achilles heel—is fitting, but perhaps a little predictable; Nic Pizzolatto is not the first or last person to advance the notion that being honest with yourself matters, not just for your psyche but for your survival.

What’s interesting is how little Paul’s death means, both for the story and for the world he lives in. He kills one of the people who ostensibly loves him and the other one probably had a hand in his framing (Emily’s face while watching that movie is a little too stricken by unknown tragedy to be purely innocent). What his life might have meant is left a little vague, and his death doesn’t mean much either, because we have no idea who all those people are in the basements of Vinci, and frankly, the mystery is so convoluted at this point that it is extraordinarily difficult to care. Blue diamonds, the city manager’s secretary, two orphaned kids, a covered-up murder, sex workers trafficked from town to town, and now a dead highway patrolman; it’s a lot. Paul’s death doesn’t quite resonate, even if James Frain makes for a lankily terrifying murderer, because there just isn’t quite room for it to. We never figured out why he mattered in the first place to spend much time mourning his passing.

But in terms of the story’s flow, what’s satisfying about “Black Maps And Hotel Rooms” is how the action builds and then crests like a wave, following a similar trajectory as last week’s “Church In Ruins,” but to my mind, more fulfilling. All of the portentous signaling of the last six weeks starts to get a chance to tip the scales, and we see the snare of criminal and government strategies closing in around Frank, Ani, and Paul (I’d add Ray, but Ray has nothing left to lose anymore). Davis turning up freshly dead in her car was a gasp-worthy moment; the reveal of Frank’s lieutenant’s betrayal and his subsequent brutal death is a slower build, but just as jarring. Watching Frank set fire to everything he’s built, after putting his disaster plan in motion, moved the episode along at a fast clip—and it was satisfying to see the man in his element, after weeks of relative and actual impotence.

And speaking of impotence…

I had no doubt that Ray and Ani were going to end up in each other’s arms at some point—maybe this just reflects a long-running understanding of romantic pairings in fiction, but they are both straight and single, so it’s not exactly rocket science, either. What I was not sure of was how the two would end up getting pushed together. If we must live in a world where Ray and Ani have to kiss, because biological imperative and/or ratings, I am satisfied with this episode’s build-up to intimacy, which is halting, awkward, and almost painful by the time Ani puts her hand on his. The episode spends so long just watching them watching each other, and the anxiety and tension of it—the need to be comforted by another human, clouded by the fear of being vulnerable—takes up all the available space in the motel room for whole silent moments. It’s awkward enough that it’s hard to watch, and that seemed to me like a brutally honest way of depicting an act that for both of them is less about titillation and more about processing some version of trauma. I still can’t wrap my head around some of the clunky dialogue—I don’t care much for Ray apparently becoming turned on by the idea that he’s a good man—but it was heartening to see Ray actually be a good man to Ani, to let her find some comfort with him.

Ani’s breakdown is brilliantly done at the beginning of this episode—and there are a lot of supporting scenes for her this week that flesh out what her struggle has been, with varying degrees of success. With her partner, her sister, and her father, I was drawn but not totally engaged.  With the woman she rescued (Vera? The names are hard to track down in this show), meanwhile, I was paying closer attention. Ani seems to have no ability to understand sex work aside from something that is inherently humiliating, and though I sort of understand that sentiment, it also flies directly in the face of what Vera is directly telling her—it was a good job, she needed the money, she didn’t mind the fucking, because “it’s all fucking.”

Ani’s stuck in a notion of what “fucking” is or means, because she’s an abuse survivor; in these two episodes, we see her all over the board with it, from profession to personal hell to escape mechanism to actual human connection. Her scene with Ray is kind of a reversal of last week’s much-hyped orgy—the one she shames Athena and Vera for being a part of. That was a theater of violence and exploitation heightened by stylized sex, drugs, alcohol, and fetishwear, one where physical intimacy was (at least for Ani) perverted by violence. This is an attempt at depicting physical intimacy without titillation or objectification; an attempt to frame sex as an act of love and connection—which it is, for most people, but is so awkwardly vulnerable that we are quick to cover it with irony. I noted that in contrast to the orgy, tonight’s scene is wholly clothes-on, with just a glimpse of the small of Ani’s back in one moment; they are almost buried in their clothes, their faces obscured by layers of fabric and their own hair. It brings to mind Rene Magritte’s “The Lovers,” where the kissing couple is shrouded individually in an opaque veil. Except in the world of “True Detective,” the more exposed physically the characters are—Paul, naked with Emily; Ani, in her underwear with the forgettable first guy; the many nameless whores—the less emotionally intimate they are. It’s only fully clothed that Paul and his friend from the war are able to interact; it’s only entirely covered that we see Ray and Ani able to connect. I don’t know exactly what that means, if anything, or if I find that presentation reasonable. But it’s a thread worth teasing out as we look ahead to next week’s 90-minute long finale.