What to do with the Rockies' only Confederate memorial?

Few in Helena, Montana, even knew the monument existed -- but once they learned of it, everyone had an opinion 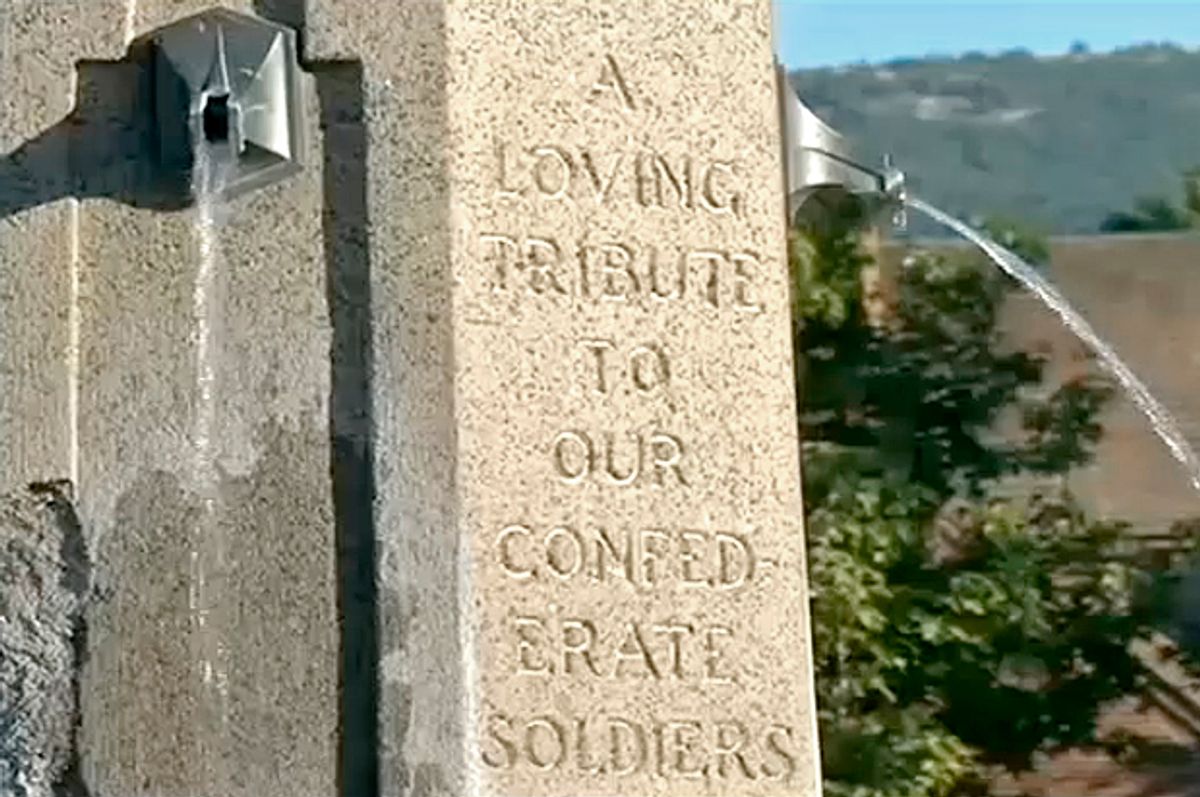 There is a stone fountain that sits in a flower bed in a municipal park in Helena, Montana. Until a few weeks ago, few Helenans had ever paid much attention to it, if they even knew it existed at all, which most did not. But now the fountain is the subject of a loud debate, because engraved on the side of it are the words “By the United Daughters of the Confederacy ...... In Loving Memory of our Confederate Soldiers.”

As Americans take stock of Confederate items in their cities, Helena has just now discovered its fountain. It was built in 1916 and is the only Confederate memorial in the Rockies. Its existence is not surprising since many Southerners came to the Montana Territory after the war.

What to do with the thing was the subject of a recent city commission hearing. Some who testified expressed outrage to have learned of the presence of the fountain, and said it is nothing more than a monument to slavery and racism, and must be torn down. Others suggested renaming it, perhaps “Civil War Fountain” instead of the current “Confederate Fountain,” which you’ll find on Google Maps. Some asked that the inscription be effaced, and replaced with a new engraving of some sort. Others said it should be left for what it is, a vestigial structure that is, however imperfect, simply a part of our town’s history.

The local justice of the peace took his opinions a step further. He became irate at the mere fact that this debate was afoot, and wrote a letter to our local paper in which he not only defended the monument but declared that the South left the union not over slavery, but to free themselves from the financial grip of “northern banks.”

Helena is generally a Democratic town, but the many liberals I spoke with are not of a single mind on this matter (although many of those who told me they think the fountain should be left alone made me promise that I wouldn’t quote them). One Democrat, the mayor, has publicly argued against removing or amending this or any other historical structure based on modern sensitivities, saying there's no logical stopping point if we go down that road. He offered our Jefferson School as one example, Thomas Jefferson having been a slave-owner. Two of his colleagues on the city commission strongly disagree. They were the ones who brought the fountain to the attention of the public, and they have taken the position that if the statue causes offense to any citizens, which it has, then something must be done. At the commission hearing, one of Helena’s few black residents spoke against the fountain, and described how it feels to live in a state where white supremacists lurk.

Our county historian cited a precedent that she thought might serve as guidance. Down the street from the fountain there are white swastikas on a black tiled floor in the lobby of the Montana Club, a 130-year-old building. The floor was laid long before Nazis, but it got covered up during a renovation and was not rediscovered until about 10 years ago, at which time the decision was made by the Montana Historical Society to preserve the floor because of its age, and because it had been designed by a famous architect. But an explanatory sign was put up next to the building’s entrance, to alleviate the shock that most first-time visitors experience when they walk in.

The swastika in 1904 was a sign of friendship and good luck, but had become, when the floor was exhumed, a symbol of evil. The preservationists’ argument is that the fountain, too, should be considered in the context of the time it was built.

Roughly a quarter of Montana’s original white settlers were Southerners. At the Sept. 6, 1916, dedication ceremony, the head of the Montana Chapter of the United Daughters of the Confederacy described the gift of the fountain as one of gratitude for being accepted, “a token of our esteem toward our new home.” There were Confederate veterans in attendance, and perhaps even children, widows or (conceivably) even parents of Confederate soldiers who died in the war.

The United Daughters began as a collection of women who buried the Confederate dead after the war, when skeletons literally covered the countryside. Today the group is small. The Southern Poverty Law Center says they are "generally mainstream." Bill Clinton wrote a letter praising the group in the 1990s.

But there’s another aspect of the Daughters: At the time the fountain was built, the group had gotten heavily into the business of putting spin on Southern history, recasting the Rebellion as one based on “states' rights” as opposed to slavery, and pushing an image of the Old South as a place of benevolent planters and happy servants, something along the lines of what’s depicted in "Gone with the Wind." And they were surely successful, for the DNA in these falsehoods lives on today, as in the letter written by our justice of the peace. Why, some here have asked, should we allow a statue to remain when it was commissioned, at least in part, as part of a broader propaganda mission?

In the end, the city commission voted on a compromise, which the town seems to be happy with: a small educational plaque, to be put next to the monument, like the one we have for the swastikas. It will describe the sculpture’s provenance and explain who the Daughters of the Confederacy were. It will be erected next month, assuming everyone can agree upon the language.