The right-wing campaign to shut down the government over Planned Parenthood has a new champion: Donald Trump 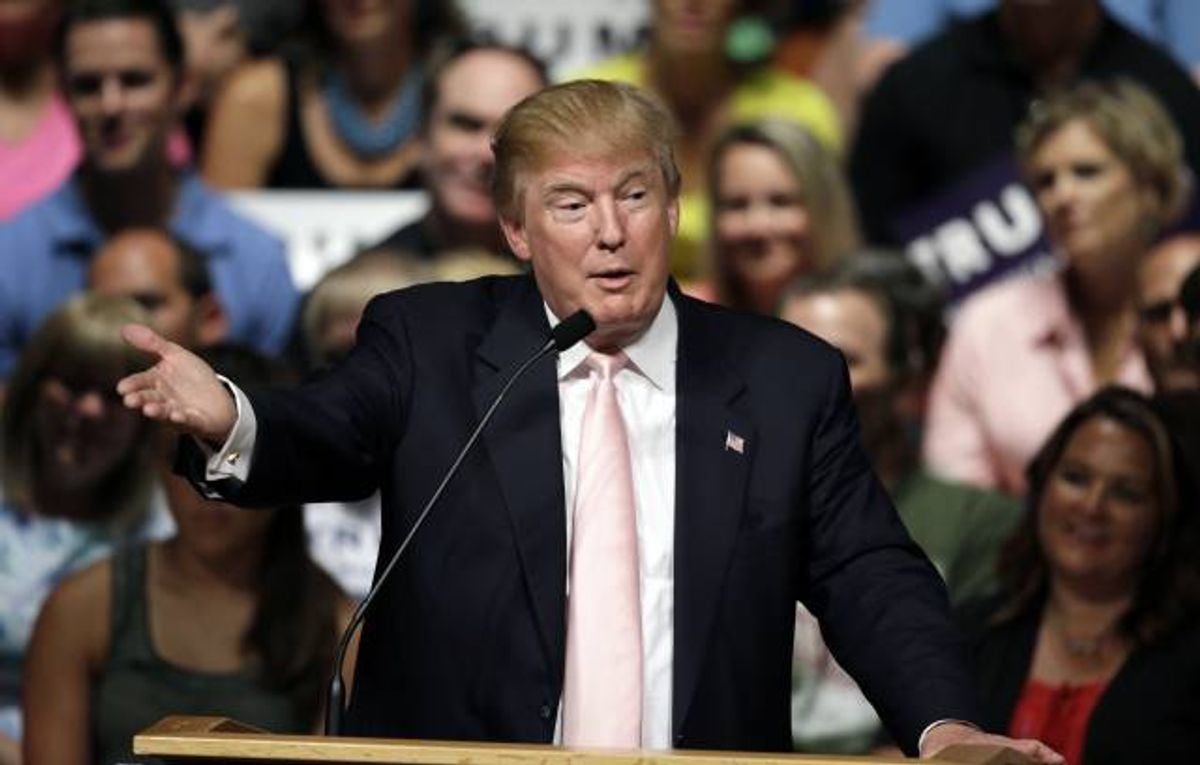 With just a couple of days to go until the first primary debate of the 2016 election cycle, Donald Trump is thoroughly dominating the Republican presidential field. A new poll from Bloomberg Politics finds Trump comfortably in the lead with more than double the support of his closest rival, Jeb Bush. That result is generally in keeping with the results of pretty much every other poll. Perhaps more significantly, it seems like Republican voters are actually starting to like the guy – his favorability ratings have improved dramatically since he started campaigning. The Trump surge is real, it’s been more enduring than anyone predicted, and it’s thoroughly embarrassing for the GOP.

The most immediate and visible dilemma posed by the Trump ascendancy is that he’s an ambulatory PR disaster for the party, and nothing they’ve done so far has successfully brought him to heel. But Republicans also have to worry about the degree to which Trump can use what political clout he has to influence policy fights.

As Bloomberg’s Sahil Kapur reported this morning, Trump went on the radio yesterday and wholeheartedly threw his support behind the conservative push to shut down the government to block federal funding for Planned Parenthood. Not only that, he framed the shutdown argument in the precise terms that conservative activists want to hear: it will work if Republicans don’t wimp out. “If the Republicans stuck together, you could have done it with Obamacare also. But the Republicans decided not to stick together. And they left a few people out there, like Ted Cruz,” Trump said.

If you haven’t been following the drama, a series of highly edited undercover “sting” videos from an anti-abortion rights group have convinced movement conservatives that Planned Parenthood is selling tissues procured from aborted fetuses. There’s no actual evidence that this is happening (Planned Parenthood maintains that they only accept reimbursements for the costs of the procedures involved, which is completely legal) but this has nonetheless become a flashpoint for conservative activists. The topic will almost certainly come up at Thursday’s Republican debate, where the voluble frontrunner (Trump) and his pot-stirring sidekick (Cruz) will argue forcefully in favor of shutting down the government.

What we’re seeing is the party inching closer and closer to the point where a shutdown becomes an inevitability, given the storied inability (or unwillingness) of Republican leaders in Congress to restrain rank-and-file members who seek nothing more than to appease the wild passions of the conservative base. It’s a big problem for Republicans, as Brian Beutler lays out:

The House and Senate Republican conferences are famously undisciplined majority-party tacticians. And though you might expect party leaders to put down an insurgency like this at all costs, so that a government shutdown doesn’t become a central theme of the presidential election, there are mounting reasons to doubt that they can avoid it. Republican victories in the 2014 midterm election, one year after they shut down the government in an unthinking showcase of resistance to Obamacare, convinced party activists that maximalist confrontation carries little political risk.

Trump doesn’t give a damn about the longer term risk to the GOP – hardline opposition to Planned Parenthood funding just happens to be part of the jerry-rigged policy platform he’s running on. But for as long as he’s the Republican frontrunner, he’s giving a voice and a national platform to the ungovernable mass of hardline conservatives who make it impossible for the GOP to effectively govern. For Republican leaders in Congress who won election by promising to be competent stewards of power, this has to be a dispiriting situation. They’re no more in favor of Planned Parenthood than your average conservative voter, but they’re at risk of losing control of their agenda to the anarchic political forces within their own party who, for the moment, are represented by Donald Trump.