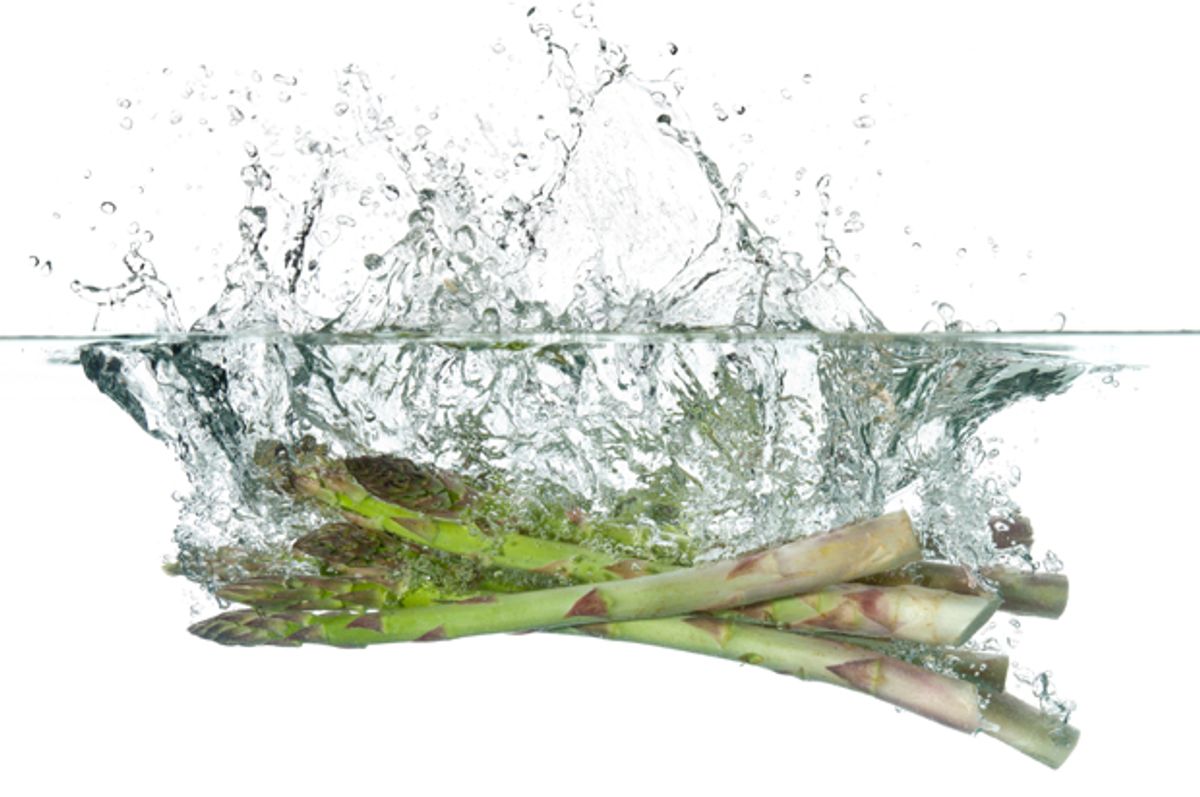 If you were looking to bring a lot of unkind thoughts together – that affluent white folk have strange taste, that Whole Foods has become a bizarre religious cult, that people on L.A.’s Westside are shallow – you could hardly find a better way to bring them all together than the story of asparagus water. Taking the obsession with juicing another step – at least, we think that was the logic here -- the Brentwood store began selling three raw stalks of asparagus in, um, water, for a hair under $6. This must have made sense to somebody, but it’s already been withdrawn, making it one of the least successful product launches we can remember.

Asparagus, of course, is not bad as vegetables go. But most people can buy a bunch of it and put it in water themselves. And there’s something about the scent that asparagus leaves in the urine of those who eat it that makes the image of stalks floating in water a touch unappetizing.

Let’s back for a minute and try to understand how this unfolded. On Monday, a writer for the blog Eater called Whole Foods to inquire into this new innovation, and got this:

The operator denied the product existed. Eventually she transferred the call to a gentleman in the produce department who did not want to give his name. He explained that the product was new, "We've had them on the shelf for the last few days." When asked how the item is made, he said, "It's water, and we sort of cut asparagus stalks down so they're shorter, and put them into the container." When Eater asked what it was for, there was a long pause before he said, "Well, it's... to drink." He elaborated, "The nutrients from the asparagus do transfer into the water."

Hmmn. Well, we appreciate the description of how to cut asparagus stalks – that’ll come in handy when we try this at home. But who knew the nutrients could circulate like that?

In any case, this explanation did not quell the critics. The blog First We Feast posted images of the asparagus water alongside mentions of the Whole Foods’ recent overpricing scandal (in which New York stores were caught overcharging for 800 items), mentions of its $20 vinegar powder, and an image of a starving child.

But the whole thing ended up being… what? A joke? A mistake? Whole Foods is calling it – in a possible nod to “Cool Hand Luke” – a failure to communicate. "There's been some miscommunication around this product,” a flack told The Hollywood Reporter.

It was meant to be water with the essence of vegetables and/or mushrooms to be used as broth (similar to a bone broth), which are typically made over a long period of time soaking in water. The product was made incorrectly and has since been removed from the one store, Brentwood, where it was carried. We would love your help clarifying that this product is not available and was removed from the Brentwood store as soon as this issue was brought to our attention."

Okay, this is all reassuring in a kind of temporary way. Maybe someone was just kidding around or misread a company edict. It would all be sort of funny or weird if this was not a chain of markets that sold us things we put in our mouths.

I don’t hate Whole Foods or its co-founder and CEO, John Mackey; these stores have probably made upper-middle-class people a bit healthier than they’d otherwise be. But it’s worth remembering that Mackey is a Milton Friedman- and Ayn Rand-loving libertarian who has compared unions to herpes, said we should not worry about climate change, and likened universal medical coverage to “fascism” (“a government takeover of our health-care system”).

But while a rigid free marketer is not likely to see it, it’s little “oops” moments like this that make me glad we have regulations. This time, it’s asparagus water. Next month, what? With quality control like that, it may be a lot less funny the next time around.