"Every story another tweaker told me while we were getting high": A guide to the end of summer's hottest books 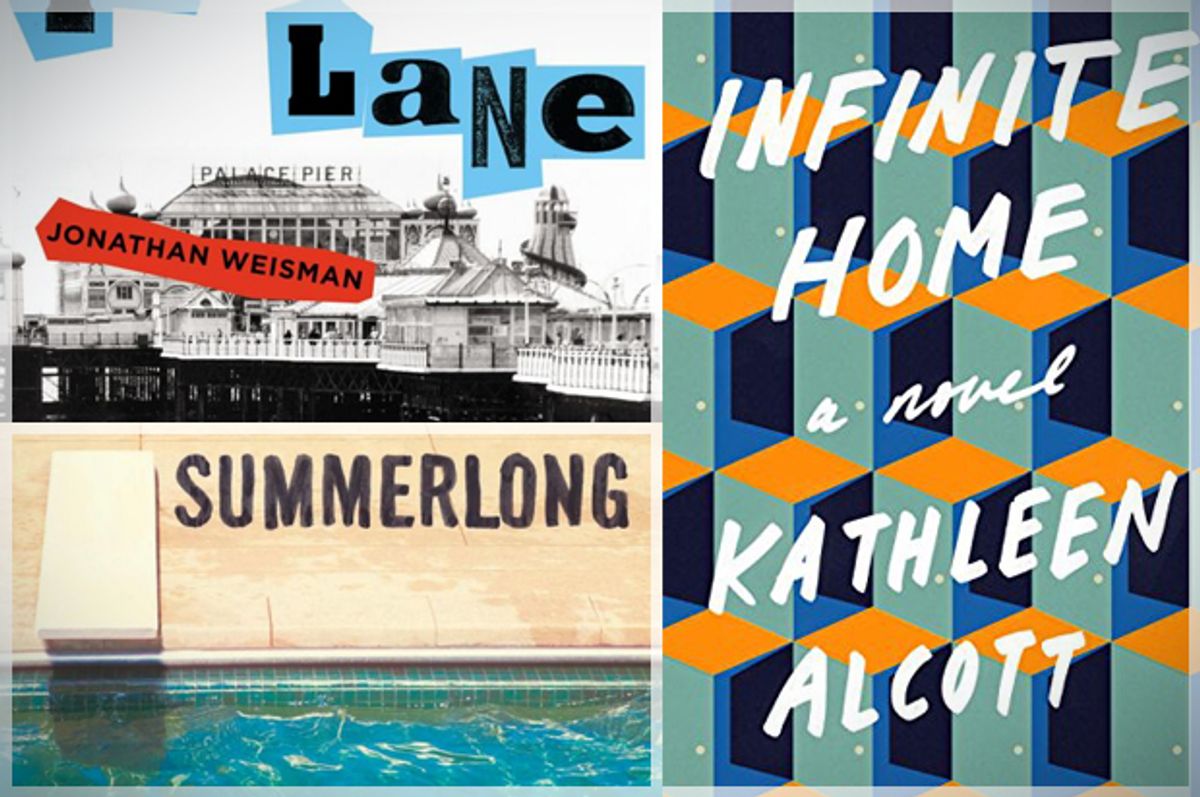 CRUCET: Various people landing in various places under various circumstances and not knowing what the hell they're doing there. So, basically, it's about what it means to be a modern-type American.

WEISMAN: Empires end. People dust themselves off and keep going. The aristocracy is dead, the Sex Pistols live (beneath the lush tones of the Cocteau Twins). Quadriplegia sucks. You can go home again.

BAKOPOULOS: The questions we constantly ask that that cannot be unasked once someone else hears us ask them, and the earthquakes those questions cause by agitating small fault lines of dissatisfaction; the impossibility of sustaining love through sheer acts of will and grit, the impossibility of enduring grief without first admitting that the grief has destroyed you in irreparable ways. Also, skinny-dipping and outdoor sex and weed.

ALCOTT: The absence of rituals, neighbors, well-worn neural pathways, reinvention, the line between obligation and sacrifice, the cultural rootlessness of 21st-century Americans.

BAKOPOULOS: Lust, regret, Bon Iver, heat, beer, swimming pools, Kum & Go, theatre performances, coffee, Gorecki, the way the light behind the water tower changed every day and never failed to slay me in some small way.  The death of a beloved student in Mexico City, Mando Montano, to whom the book is dedicated.

SINISTER: Every story another tweaker told me while we were getting high, drug psychosis, blackouts, bad dreams, ghost sightings, performance art, extreme athletes.

WEISMAN: An almost pathological inability to end relationships kept me in England for an extra year, where I worked for a quadriplegic and his tipsy sister. That and the Peace Corps in Guinea Bissau, plus various wanderings of youth.

CRUCET: The confirmation of Justice Sonia Sotomayor, Big Pun (in general), Elian Gonzalez and this crazy-weird unofficial museum/shrine to him in Little Havana, the new millennium and all the ultimately silly fear surrounding it, Miami (living there and leaving it), Los Angeles (living there and leaving it), the One Voice Scholars Program (google it!), our country's broken immigration system, this one really fly halter top I used to own.

WEISMAN: Marital crackup, reading every book of Harry Potter from 8 to 9, writing from 9 to 11 every night, trying to cover the early years of the Obama White House while studying Portuguese colonial history.

G’SELL: Self-mythologizing and self-eviscerating. Rescuing a terrier mutt who inevitably rescued me. Falling in love too many times and drinking too little water.

CRUCET: Trying and trying to call the West Coast home while consuming much good food (mostly tacos) and working the best/worst job of my life [insert several months of traffic jams and fart noises] -- but then family family family (#305) and my heart was like BOOM and so. . . no more tacos, moved back across the country to a new job, then fear fear fear and much humidity and much loss/heartache (see novel's dedication/acknowledgements for [some] details), then The Worst/Best Year of My Life (depending on Life Realm), which brings us to now(ish) and INVINCIBLE SUMMER!!!!!!! (Also, a little mania, in case that wasn't clear.)

SINISTER: Edgy. I hate that word more than all of the rest.

G'SELL: "Clever." To think I once, naively, held positive connotations for the term. Then I realized how quickly it could be deployed to dismiss poetry that enjoys being witty, or perhaps doesn't even enjoy being witty but is witty all the same. When conjoined to the adverb "overly," clever assumes a biting quality, along with a lovely consonance--the latter upon which I try to focus when the phrase is used to describe my work.

SINISTER: Bodybuilding, Ben & Jerry's Flavor Creator, Casino Themist, the guy who picks what Netflix streams, and is being Warren Buffett a career?

G'SELL: Cinematographer or film director. In a lot of ways I see my poetry as a linguistic distillation of a moving image impulse--the lush mise-en-scène of Jean-Pierre Jeunet mixed with Jean Renoir's promiscuous roving camera. Hal Wexler's Medium Cool. But would also love to direct music videos.

CRUCET: Is "Orca" a career? If so, Orca. If not, Major League baseball pitcher (ideally, a Greg Maddux type).

BAKOPOULOS: I’d be a homesteader living off the land, an off-the-grid dude in backwoods Wisconsin or Minnesota. But if that doesn’t count as a career, I’d probably be a real estate agent, because I love wandering through people’s homes when they are not there, and I love the promise and the drama that comes when people move to a new house or town.

CRUCET: I've been told I'm good at voice and place, which I think translates to, "You're good at writing about Miami." I think I'm good at plot in that I've never struggled with it -- my characters always find themselves in trouble pretty quickly (*knocks on wood to prevent jinx*). I would like to be better at not being afraid to be weird on the page, because I do tend to restrain myself there by thinking, That's not My Thing -- I would like to be better at not thinking of myself as having A Thing.

WEISMAN: Dialogue is what I do best, and thankfully, what I enjoy doing, along with plot development. I need to work on slowing down, letting a scene develop more elegantly, and I really want to write women better.

SINISTER: Raw creativity and humor are strong. I'm horrible at networking. Is that craft? For actual writing, I wish I was better at writing long paragraphs.

BAKOPOULOS: I think I’m good at unexpected dialogue and moments of interior intensity, in which characters think thoughts they’ve been afraid to think. I think I’m pretty good at pacing too, partly because I’ve been studying television scripts to learn how to write those. I’d like to be better at knowing what’s not working plot wise earlier in the drafting process and the seamless integration of subplots. I love subplots, but they often take an exhausting amount of time to get right and they never sparkle the way I want them too.

G'SELL: Clever and / or memorable titles, probably exposing my one-liner jokester side, or predilection for packaging. I'd like to be better at narrative poetry, given its generally wider readership. But while I'm smitten with stories--reading and telling them--I struggle with steering narrative content through the twists and turns of stanzaic form.

ALCOTT: I can focus on the construction of the sentence, can supply meticulous detail, all day long. I’d like to become more comfortable with dialogue that is sustained for many pages.

G'SELL: I bristle at its hue, then paint the whole house purple.

WEISMAN: As a journalist for one of the biggest newspapers in the country, I take for granted that people read me, not for my deft prose but because they desire to be informed.  I am just the vehicle delivering that information.  For me, turning to fiction was an enormous leap in expectations for my audience.  A novel reader is choosing me, not the New York Times, and is reading my story for entertainment, not facts.  So, in reality, I have no hubris, only panic.  Some people I barely know bought the damned thing to publish it.  I trust they know more than I do, but I am singularly lacking in faith on this front.

ALCOTT: I don’t think I do contend with it very well; I have a great deal of anxiety about it—I suppose I contend with it every day, by trying to matter more, by trying to research more widely and thus making my fiction a little ‘bigger,’ by revising, by reading each sentence aloud one more time.

BAKOPOULOS: I don’t. To pretend all writers who write for publication do not traffic in an unbelievably transparent sort of hubris is insane. We all believe we deserve attention, which in itself is an act of hubris, though most writers mitigate such arrogance with crippling self-loathing and an ugly need for approval. Most writers I know are egomaniacs that lack confidence, a truly toxic sort of personality. We can resist or redeem this personality trait with good relationships in the world—as partners, parents, or pals— and learning how to love others in ways that we don’t love ourselves. The work we create maybe redeems us somewhat, too.

SINISTER: I have tens of fans and they hang on my every word. Don't you know who I am?

CRUCET: The way I contend with anything these days: #yolo