Digital Orwellian nightmare: Are our smart devices really smart enough to spy on us?

Dubious privacy claims have been made about smart TVs, smartphones and smart meters. Let's look at the facts 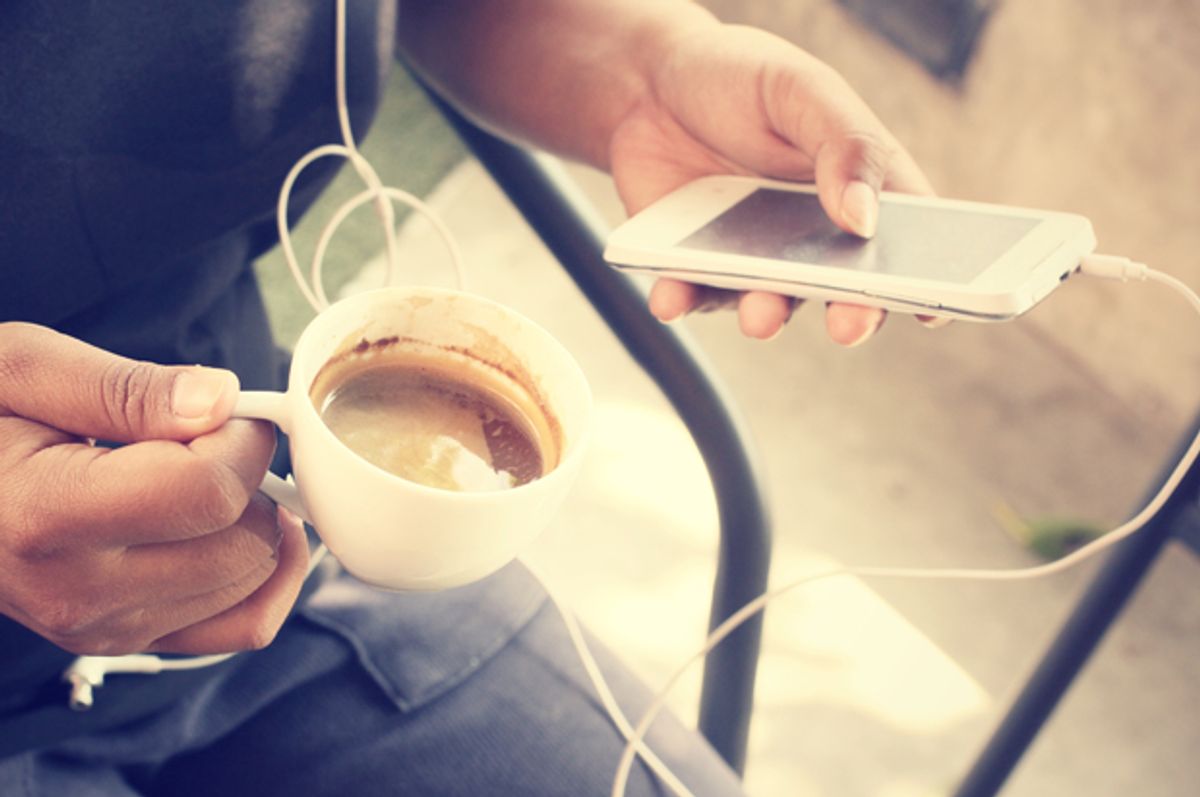 Smart devices have become the latest target in an anti-electronic backlash that has swept the nation in recent years. Spurred by conspiracy theorists, dubious YouTube videos and social media, the public is being led to think smart devices are akin to artificial intelligence spying on our personal lives. While there may be some concerns about electronics that capture or share consumer data, we are far from a digital Orwellian nightmare. Let’s look at the facts behind three maligned “smart” devices.

1. Smart televisions. Earlier this year, the Internet was buzzing with headlines declaring that smart televisions, particularly Samsung’s Smart TV, were designed to spy on everything people say while at home.

“Your Samsung TV is eavesdropping on your private conversations” declared CNN Money in February. In fact, Samsung Smart TV comes equipped with a speech recognition technology, which is not so different from similar technologies used by Apple (Siri), Microsoft (Cortana) or Google, and sometimes your requests are captured and sent over the Internet, which might make you a bit nervous.

Samsung’s own Smart TV privacy policy language doesn’t help matters, and perhaps fueled the conspiracy theory about their televisions. The company told users that spoken words, including personal and sensitive information could “be among the data captured and transmitted to a third party through your use of Voice Recognition.”

The Internet was soon filled with clickbait headlines written to feed off the paranoia of conspiracy theorists (“The Spy in Your Living Room”; “New TVs Watch You While You Watch Them”). But Caleb Denison of Digital Trends declared “this business about an army of eavesdropping TVs is flat-out irresponsible reporting, loosely rooted in ignorance and imagination.”

Digital Trends points out that smart televisions aren’t “always listening” as they are being portrayed in the media. In fact, such televisions are asleep most of the time, and are only awakened when they hear a pre-programmed phrase like “Hi, TV.” So, any conversation you may be having before waking the television is not captured or reported. In fact, when the television is listening, it informs the user it is in this mode by beeping and displaying a microphone icon. And when the television enters into listening mode, it doesn’t comprehend anything except a catalog of pre-programmed, executable commands. Such commands allow you to turn the monitor on or off, set the volume, change stations, but these commands are not shared over the Internet.

It’s only when you record a show, perform a search, or interface with “on demand” services or apps that the television communicates over the Internet. For example, if you recently searched for a movie featuring the actor Vince Vaughn by speaking his name, you may see suggestions for other movies starring the same actor or other films that are generally liked by other users who watch Vince Vaughn movies. This is not much different than performing a Google search for a product only to see it later advertised on a website you visit. Netflix also uses this tactic to encourage its customers to keep using the service.

With smart televisions, some information, like IP address and other stored data may be transmitted as well. According to Samsung, its speech recognition technology can also be used to better recognize regional dialects and accents and other things to enhance the user experience. To do all these things, smart television makers like Samsung must employ third-party applications and servers to help them decipher the information it takes in, but this information is encrypted during transmission and not retained or for sale, at least according to the company’s privacy policy.

But while a smart television, game console or cable box might try to nudge you into making programming decisions based upon your past viewing habits, they currently can’t monitor your offline speech to market products to you. So, if you mention to your housemate that you’re running low on laundry detergent, the television, either asleep or even in listening mode, won’t cue up a commercial for Tide. This has probably less to do with marketing ethics than it does with the current limitations of computing technology. Such artificial intelligence is not currently feasible. The tech just isn’t that smart yet.

If the idea of personal electronics, like a smart television, listening to your speech still bothers you, there’s a quick solution. All of these devices give you the option of turning off speech recognition. And if that’s not good enough, you can always cut the cord, and only consume television via broadcast instead of through cable or Internet-based services like Hulu, Apple TV or Sling TV.

2. Smartphones. While at a music festival, I noticed my phone’s battery was running down. Having brought my charger, I found a charging strip and went to plug the phone in. A man attempted to swat my charger away from the outlet.

“Never plug your phone in at a public place; they’ll steal all your information,” he admonished.

I plugged the phone in, ignoring him. However, I wanted to tell him that while the charging head is connected to a USB cord, all it really does is use a bridge rectifier — a simple circuit — to convert alternating current electricity into direct current. The bridge rectifier on a cellphone charger can’t transmit data, all it can do is convert power to charge the battery. Even if it could transmit data, the AC electrical currents that run through homes and businesses are not connected to the Internet (although such a technology, called Broadband Over Power Line, was abandoned nearly a decade ago).

A few months back, a series of videos were posted to YouTube and Facebook claiming that the stickers affixed to cellphone batteries are transmitters used for data collection and spying. The initial video showed a man peeling a Near Field Communication transmitter off the wrapper on his Samsung Galaxy S4 battery. The person speaking on the video claims this “chip” allows personal information, such as photographs, text messages, videos and emails to be shared with nearby devices and “the company.” He recommended that the sticker be removed from the phone’s battery. The video went viral earlier this year.

But there’s no secret plot there. NFC is the technology you use to make payments from your mobile phone or voluntarily share data or media between two smartphones. Your smartphone’s NFC, while it shares data, is a passive system, meaning it doesn’t have its own power source, so it draws low levels of power from a nearby device interfaces with it through magnetic induction. So any device that would read your phone’s NFC would have to get very close to it to get data from it. You would need to configure an app to accept NFC data sharing.

And that sticker isn’t some nefarious implant the phone manufacturer uses to spy on you; it’s nothing more than a coil antenna to facilitate NFC transmission. If you peel this sticker from your battery, it will compromise your smartphone and likely render it useless for apps that use NFC, like Apple Pay and Google Wallet.

3. Smart meters. These devices record the consumption and distribution of energy much more efficiently than conventional analog meters. There is a two-way sharing of communication between the reader and the utility provider and energy information is shared by the hour to help the utilities make better and more timely decisions when managing the grid. For the homeowner or business using self-generated energy sources, the technology helps define not only how much energy is consumed, but whether the energy source is the grid or locally produced. Without them, proper billing for alternative-energy customers would be impossible and grid reliability can become compromised.

In recent years, privacy activists have targeted smart meters, saying they collect detailed data about energy consumption. These conspiracy theorists are known to flood public utility commission meetings, claiming that smart meters can do a lot of sneaky things like transmit the television shows they watch, the appliances they use, the music they listen to, the websites they visit and their electronic banking use. They believe smart meters are the ultimate spying tool, making the electrical grid and the utilities that run it the ultimate spies.

Tea Party and Republican groups have been quite active in fueling the public outrage directed at smart meters. In Clark County, Nevada, the Republican Committee has declared war on smart meters, which is unfortunate in a state that should be the “Persian Gulf of Solar Power” and would need smart meters to facilitate the growth of solar power.

“It’s seen as a Big Brother thing,” Clark County Republican chair David Gibbs told the Las Vegas Sun in 2012. “It’s not even the government. It’s a private company getting more access to more information, and you don’t even know what they have access to.”

Dispelling the dubious privacy claims made about smart televisions, smart phones and smart meters is not an easy task. There are legitimate privacy concerns regarding smartphones related to information sent over wireless and carrier networks, just like any other Internet-connected device that can be spied on by the NSA or other agencies. With smart televisions, the technology to have a HAL 9000-style spy in your living room isn’t there yet, and hopefully never will be.

In regard to smart meters, the claims that they can collect the most nuanced personal information through electrical outlets are as ridiculous as they come. Any electrician or IT expert will assure you that you can’t track your every movement in the house through its electrical outlets.

Most importantly, smart devices aren’t all that “smart,” at least yet. Yes, they gather and share relevant consumer data and there may be minor privacy issues we may want to consider. Still, it's important not to jump to fantastic conclusions about technology, especially if we don’t comprehend it fully.

Admittedly, the revelations about the collective spying on Americans by their own government should make us all wary about our privacy, but it doesn’t give us license to make wild claims about new digital technologies in the absence of hard facts.