Before the blockbuster was rewritten, the main characters were Chinese. What if that didn't change? 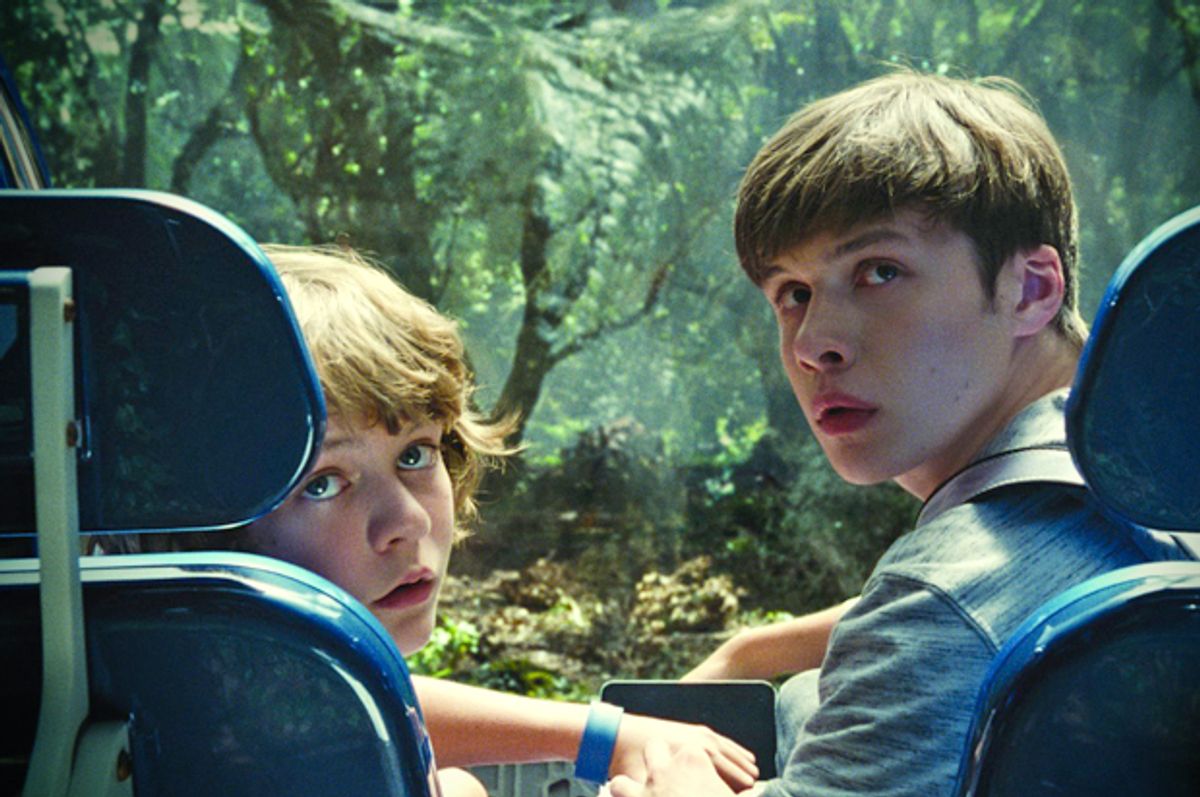 Universal Studios recently announced a release date for the inevitable "Jurassic World" sequel, just two days after the sci-fi adventure passed "The Avengers" to take the No. 3 spot on the all-time list of box office successes (now trailing only "Titanic" and "Avatar").

Returning for "Jurassic World 2" are Bryce Dallas Howard and Chris Pratt, meaning the fifth installment in the franchise will likely again center on the lives of people who look like Bryce Dallas Howard and Chris Pratt. Because despite the relatively diverse supporting cast in the current chapter — including important parts played by Irfan Khan, B.D. Wong and Omar Sy — "Jurassic World" maintains the focus on white people reflected in nearly every other big budget heavily marketed Hollywood blockbuster on the all-time list.

Yet, before it ever broke any box office records, there was a time when "Jurassic World" was destined to be something much more — something truly game-changing. And with each new pinnacle the franchise reaches, amid national conversations on white supremacy and the deaths of Sandra Bland, Paul Castaway and so many others, this missed opportunity for Hollywood becomes especially glaring.

Colin Trevorrow, in only his second stint behind the camera, directed the latest chapter in Steven Spielberg’s dino-series and helped rewrite the script with Derek Connolly, working from a previous draft written by Rick Jaffa and Amanda Silver. In an interview with ScreenCrush, Trevorrow describes how his team dramatically shifted the focus:

We started from scratch. There were three very fundamental ideas that Steven had mandated...The park is open, there is a raptor trainer and the dinosaur that breaks free and threatens the park. The only other thing that we kept from the Rick and Amanda script was that there were two boys. In their script, they were Chinese and were the sons of a Chinese paleontologist that was going to the park because the DNA of a dinosaur she had found had been stolen. So, obviously, very, very different movie. But, that was about it.

That was about it.

The decision to tell the story of two white boys visiting their white aunt who manages an increasingly corporate “Jurassic World” clearly paid off in a big way for Trevorrow, Spielberg and Universal Studios, who are having a banner year overall in terms of box office receipts. Yet, the choice to remove three Chinese characters from the biggest film of the moment was no small thing. Because even as he transformed the fundamentals of the plot, there's no clear reason why Trevorrow couldn’t have kept more of his characters Chinese. And had he done so, given the increasing power of the film market in China, he might have even expanded the film's box office potential.

But of course, as in most Hollywood productions, “starting from scratch” tends to mean “starting from white,” and thus the possibility of a major blockbuster film starring a woman of color was once again tossed aside. (In case you’re wondering, only about 1 percent of the top 500 films of all time feature a woman of color as the primary protagonist.)

What’s particularly fascinating about this alternate "Jurassic World," though, is not only that it might have had a Chinese woman as its protagonist, but that her two sons would have been lead characters as well. Meaning, there might have been many crucial scenes, playing on cinema screens across the United States today, where the three most important speaking parts were all played by Chinese people.

That doesn’t happen very often in Hollywood, let alone in a blockbuster film.

As Dylan Marron’s Every Single Word project highlights, through (very) short videos editing together all the dialogue spoken by people of color in certain well-known feature films, Hollywood still struggles to pass even the most basic tests of diversity. Most films still fail the Bechdel Test for representation of women (though "World" passes), but when you combine it with race, you start to see that even when women of color do appear on screen, it’s rare for them to speak to each other, and for their conversation to be about something other than a white person.

All of which, as Marron has noted, can teach audiences that whiteness is the default and that “people of color don’t fit into the zeitgeist of human emotions.” Furthermore, as has also been discussed, the cumulative effect of Hollywood’s history of whitewashing stories — of which "Jurassic World" is an example — may have a larger impact on our collective experience of empathy.

But a recent study out of Zheijiang Normal University in China offers further evidence that just one black woman in the foreground, or an army of various people of color in the background, may not be enough when it comes to challenging the way we are all socialized to think about race.

Researchers at Zheijiang Normal showed a group of young Chinese children photos “with angry or happy racially ambiguous faces that were morphed between Chinese and African faces.” When the kids were asked to determine the race of each of those faces, their implicit bias started to show, as they tended to see the happy faces as being of their “own-race” while the angry faces were more likely to be described as African. As psychologist Nathalia Gjersoe reported at The Guardian, this is disturbingly consistent with what happens in adults and children in the U.S. as well, where angry faces are more often described as being black, as compared to white faces. Certain reactions to Nicki Minaj’s recent critique of the music industry only confirm this.

But check out what happened next in the Chinese study, as recounted by Gjersoe:

The researchers then introduced a very quick intervention. Four, 5- and 6-year-olds were asked to discriminate between 5 African faces and had to remember what number went with each face before they could proceed to the next step…When the angry-outgroup test was repeated, the bias had disappeared. Children were just as likely to say that the angry faces were Chinese as African.

In other words, when the youth were forced to study more than one black face as an individual, at least briefly, it pushed aside a tendency (formed as early as 4 years old) to see those faces as being less than their own.

Thus even though "Jurassic World" does have a scene where two men of color in supporting roles (Khan and Wong) briefly discuss something other than white people, the film gave up an opportunity to do something far more impactful with its overall story. Because if encouraging people to study many faces from an othered group helps reduce implicit bias, imagine how powerful a "Jurassic World" centering a Chinese woman and her two Chinese sons might have been in the U.S. today.

Or, given this Chinese study, what about one with a leading cast of all black and indigenous women? What cultural impact could just one blockbuster like that have worldwide?

There’s a scene in Jennifer Phang’s sci-fi drama "Advantageous," which premiered at Sundance and was recently released on Netflix, where the lead character, a working mother living in the not-so-distant future, visits her family in order to plea for a loan. She is considering going to drastic measures to pay for her daughter’s schooling, but the two people sitting across from her don’t know that, which adds heightened tension to their conversation.

Yet what elevates the scene is the fact that everyone in the frame is Asian. While we are foremost in Gwen’s shoes during the scene (played by Jacqueline Kim, who is Korean), we are also forced to see Lily and Han (her sister and brother-in-law, played by Jennifer Ikeda and Ken Jeong) as independent people, who have their own unique issues on the other side of the table. We have to understand all of these people beyond their surfaces — she’s not just a woman, he’s not just a man, they’re not just Asian.

This is the kind of simple yet powerful humanizing act that we do constantly while watching film, yet something we rarely do with groups of people of color. And unlike most scenes where everyone is white, in "Advantageous" we also simultaneously know, because of the history of systematic oppression and the specifics of Phang’s commentary on beauty ideals, that surface appearances are crucial to understanding the characters' life experiences completely. The film is able to subtly draw attention to what sociologist Joe Feagin calls the “white frame” of racism, while also furthering its sci-fi plot.

There is no comparable moment in any blockbuster Hollywood production in recent memory.

In fact, Benson Lee, director of "Seoul Searching," which also premiered at Sundance this year, recently remarked that he believed his is only the third film of its kind to center exclusively on the lives of East Asian Americans in the last twenty years, after 2002's "Better Luck Tomorrow" and 1993’s "Joy Luck Club." And though there have been U.S. films with all-black leading casts in that time, including the Oscar-nominated "Selma" last year, none have ever been given anywhere near the budget, wide-release, or marketing push which "Jurassic World" enjoyed.

While understanding multiple characters of color at once may be key to creating compassion for those who look different than ourselves, what's most frightening is what might happen in the absence of these sorts of films. Because as Gjersoe also notes in her article, while research has shown that the conscious racist beliefs of kids can dissipate over time, if left unsupported by the world around them, the unconscious stuff, if it's not challenged before those kids get out of preschool, "usually remain[s] consistent through to adulthood." Especially when our society, seemingly content with white supremacy and patriarchy, is actively encouraging them not to think any differently.

So while the script has yet to be written for "Jurassic World 2," one hopes that someone at Universal is advocating for the return of that Chinese paleontologist and her sons. Or maybe a grown-up Kelly Malcolm and her siblings.

Because rather than films that sprinkle people of color in at the margins, or even place a single woman of color in the center, what we really need more of are widely seen films that feature many lead characters from one marginalized background. Because by making audiences do the work of differentiating between, say, multiple black women across multiple films, cinema has the extraordinary opportunity to actually help break apart some of society’s otherwise most deeply held biases. And perhaps most important, it would signal to those within an oft-ignored and oppressed group that they are indeed valuable, beyond the harmful stereotypes that others might project onto them.

Imran Siddiquee is a freelance writer and filmmaker. He was a founding member of The Representation Project. Follow him @imransiddiquee