Here's how candidates avoid the Donald Trump trap: Alex Wagner examines how the field can avoid a debate disaster 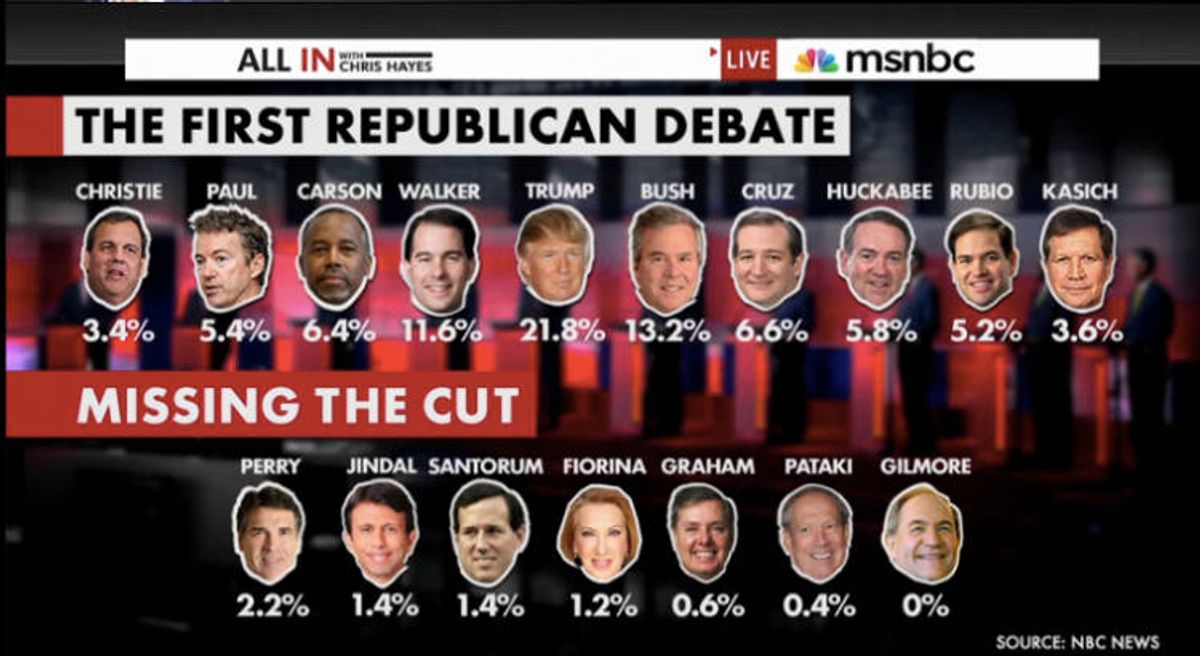 The stage is set.

Fox News is set to host the first GOP primary debate and it's selected who the top 10 Republican contenders are that get to compete on the main stage at 8pm and which are the losing 7 that debate before the 5pm crowd.

On Tuesday's edition of MSNBC's "All In," guest host Alex Wagner looked at how Fox News' calculation for which 10 of the 17 Republican candidates vying for their Party's nomination gets a spot on the main debate stage, has left others "none too happy about the situation." Wagner spoke with Rick Wilson, a longtime Republican strategist, and Rick Tyler, a Ted Cruz spokesperson, about the frustrating situation for those candidates "relegated to the so-called 'kiddie table debate'" by Fox News.

After Tyler hilariously confused the East Coast - West Coast time differential to argue that "5:00 p.m. on the East Coast is 8:00 on the West Coast. And 9:00 start for the second debate is midnight on the West Coast. So, look, the 5:00 -- I think -- you know, the network has done the best they could," Tyler decided to defend, not his candidate Ted Cruz, but GOP frontrunner from accusations that the firebrand may pose a problem for other presidential aspirants hoping to make a mark in Cleveland:

But, look, we`ve got 17 really very impressive candidates, very diverse field, and the Democratic Party looks like, you know, "That `70s Show". And so, I mean, you look at the difference.

So, look, we have a blessing of riches.

I think what the point about Donald Trump is, as you just alluded to earlier, that Donald Trump is an embarrassment to the Republican Party, and that is just an indication of the establishment and the Washington cartel doesn`t understand why Donald Trump is popular in the first place. He`s getting 26 percent for a reason. He`s getting it because he`s talking about and highlighting issues American people care about and talk about and he`s putting action items to those as well.

Senator Cruz does that as well, a little differently than Donald Trump does. But a lot of -- people are sick of the status quo. They`re sick of politician whose pontificate and go on and on about all these problems, and the debt, and the immigration and all this -- and nothing ever happens and nothing ever changes.

Watch the clip below, via MSNBC: