Jon Stewart's uneasy legacy: He was the avenging angel of cable news — but cable news is still a total disaster

When Stewart sent CNN's "Crossfire" to an early grave, it marked a new era in media criticism. But things got worse 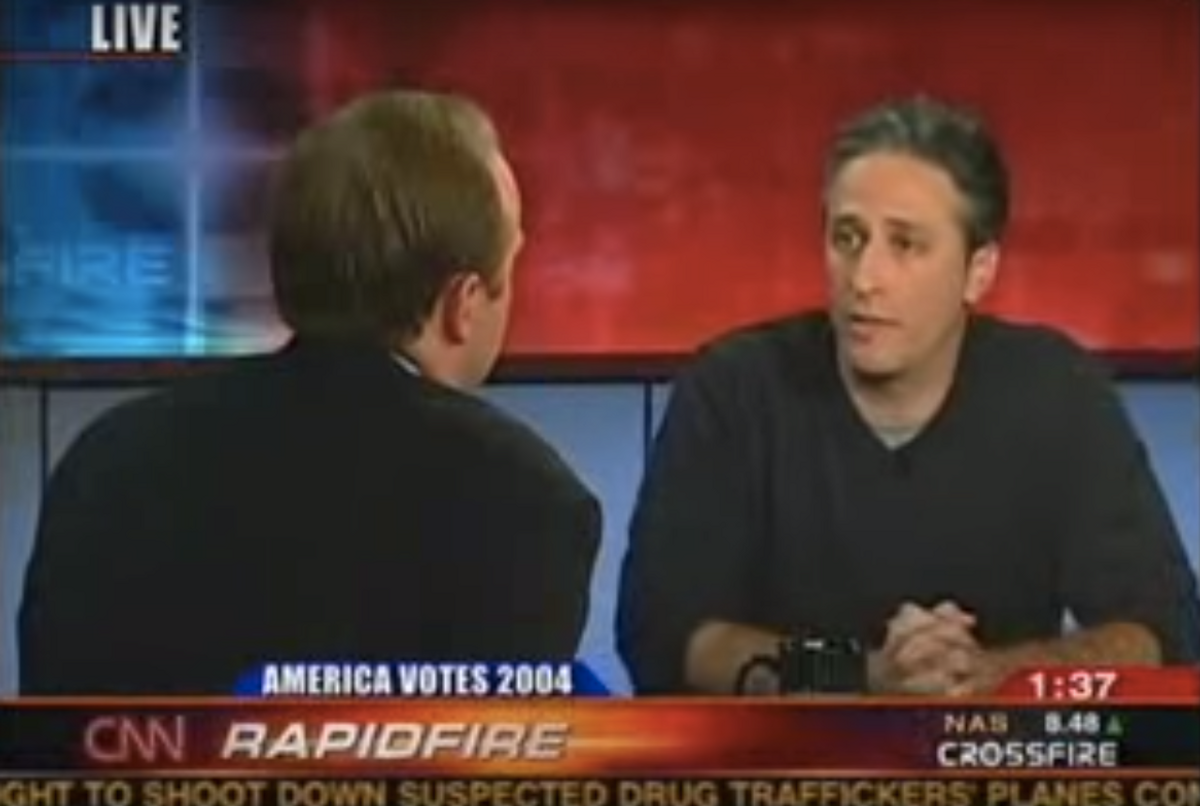 Jon Stewart’s appearance on CNN’s “Crossfire” in 2004 is said by some to be the first viral video of note. At the time, nobody had ever seen somebody like Stewart savage an institution like “Crossfire,” which had been on the air since 1982 and had pioneered the way politics gets debated on cable news. It was a brutal, live humiliation, and the video went viral long before Twitter, before Reddit, back when something called thefacebook.com was getting popular on Ivy League campuses and when YouTube.com wasn’t even a domain name. Stewart spoke a truth that resonated, that cable news was poisoning political discourse, and the "Daily Show" host leaped into his position as America’s high critic of the press, the media establishment, and the way we talk (and don’t talk) about politics.

The video was, and still is, a must-see. “I’m here to confront you,” said Stewart, immediately shredding any sort of script the two hosts had and putting them on their heels. “You have a responsibility to the public discourse, and you fail miserably,” he charged. “You’re doing theater when you should be doing debate. This is not honest.”

The video went viral, but Stewart’s truth-telling, too, was something like a virus that infected the charade of “Crossfire,” crippling it, and the show fired its last shots just months later, due in no small part to Stewart’s fearless rampage. The show was precisely what Stewart hated most: “partisan hackery,” as he described to hosts Paul Begala and Tucker Carlson. Since its inception, the show featured a succession of professional partisans, mostly people who worked in presidential communications and speechwriting. “Crossfire” was a place for professional talking-points writers to scream partisan talking points.

"Crossfire's" inaugural conservative host was Pat Buchanan, former adviser in the Nixon White House, who would eventually leave the show to become Reagan’s communications director. That began a long lineage of apparatchiks from both parties who’d spend some time on "Crossfire" before rejoining their parties in an official and more honest capacity: Paul Begala (who worked for Bill Clinton), James Carville (again, Clinton), Mary Matalin (Bush I), John Sununu (Bush I), Tony Snow (Bushes I & II), Stephanie Cutter (Obama), and Van Jones (Obama).

Stewart almost single-handedly ended a show that had been on the air for two decades. It was one of his invaluable contributions to the discourse, but it could be argued that the sort of discourse Stewart railed against only intensified after his appearance. The year after he destroyed “Crossfire,” MSNBC really emerged as the liberal, Democratic Party-oriented answer to Fox News, when Keith Olbermann stepped out as the fire-breathing, talk-radio-emulating counterpart to Fox’s Bill O’Reilly and Sean Hannity. The outspoken Olbermann, whose 8 p.m. time slot put him opposite O’Reilly, started an on-air verbal war with Fox’s primetime bloviator in 2005, often naming O’Reilly in his “Worst Person in the World” segment.

MSNBC climbed rapidly in viewership and became what it is today, the house that Olbermann built. (For the time being, at least, as the network appears to be doing another of its perennial course corrections.) And it’s easy enough to blame Olbermann for what Stewart called the decision to “fight fire with fire” and to simply create a liberal foil to Fox News to lock horns with the Rupert Murdoch's cable behemoth. But it was the viewers -- it was us -- who flocked to Olbermann’s combative, caustic liberalism.

If conservatives could have a news network to confirm their biases, then Olbermann made it so that liberals, too, could have what Pulitzer Prize-winning media critic Howard Rosenberg called their own “echo chamber in which Olbermann and like-minded bobbleheads nod at each other,” a sentiment shared by Stewart, who likened the Olbermann era and its wake at MSNBC to an “arms race” to outdo the other side’s outrage and sensationalism. And viewers were all too eager to eat it up. It turns out that some Democratic voters were just as apt to tune-in to watch an hour of someone smugly and/or angrily voicing their already-held beliefs without a challenge, though it should be noted that Fox News' far superior ratings suggest that partisan propensity to be much more pronounced on the right.

Olbermann featured some fantastic guests and gave air time to journalists who would otherwise be unheard on primetime national television, but his personal style of discourse rarely ever extended past the level of browbeating. Nonetheless, his success in the mid-aughts led to what MSNBC would ultimately become, with an evening lineup of almost relentless partisanship, especially with hosts like Rev. Al Sharpton, Ed Schultz and Chris Matthews. Even the excellent journalism performed by the teams led by Rachel Maddow and Chris Hayes was colored by that milieu.

Now, there's always been opinionated or purely partisan journalism -- journalism cannot be purely objective, after all -- but the sort of bombastic emotional appeal made on cable news, with music, graphics and telegenic professional talkers, is a different beast entirely. A whole team of technicians and artists collaborate every night to make broadcasts that first and foremost satisfy our visceral senses (whether or sight, sound or outrage).

Print media, with its static, unadorned words, can surely convince -- and before the advent of broadcast media did so exclusively -- but there's a certain passivity that characterizes television-watching, or listening to one speak on a soap box or rostrum. Reading is more of an active, labor-intensive endeavor, one with greater power to inform but lesser to affect. No matter how well I tailor my words, Bill O'Reilly will have a command over his audience that I can't have with a readership, not in 2015. A person speaking has a power. (There's a reason, after all, why politicians travel to speak in front of crowds, and not simply issue stump missives.) Thus, the talking heads on your television set now command a rhetorical machinery more powerful than any other ever devised.

Stewart may have destroyed “Crossfire,” but has the cable-news landscape somehow gotten worse? Is there not a certain, if lamentable, longing for what Stewart killed in “Crossfire”? At least the two partisans were screaming at each other across a table, in the same room. Now they were on separate networks speaking to different households. The news media landscape became more and more balkanized, split into two different discourses that rarely meet. We no longer even had shared terms of debate, as unproductive and even damaging as those terms were. It might’ve been a farce, but at least it was a shared charade. “Crossfire” attempted a reboot in 2013, but its day was done and it quickly floundered and failed. We now tune in to CNN for wall-to-wall coverage of catastrophes, and to MSNBC and Fox for our politics. Viewers had lost the taste for the two sides meeting for debate.

Or is it that the “Daily Show” became the place that they met, when Stewart would lampoon the errors and excesses of each side? In a way, he destroyed “Crossfire” and replaced its function with “The Daily Show.” True, they weren’t at all the same. They weren’t even the same species of show. But their function was similar: Stewart became the center, where liberals and conservatives sat down, where reproach and censure were handed out to both sides with rare even-handedness, despite Stewart’s clear contempt for Fox and progressive bearing. His goal was to be between the extremes, firing shots at each (kind of like being in a... crossfire?), and vowing to “restore sanity,” as he and Stephen Colbert’s 2010 Washington rally promised.

But if that’s true, if Stewart deposed the “Crossfire” model and ascended to a singular spot where some degree of sane appraisal of both sides could be found, he became the lone arbiter. When he leaves, there is no heir to that important function he created. And things are even worse now. The two political poles depart further into estrangement. The national political discourse occurs as though across a chasm, where each side must yell now simply to be heard on the other side. Stewart made “The Daily Show” into the one place on television where each side’s arguments could be adjudicated. But that’s the problem: It was one place. Stewart had become a sort of referee, and seemingly no one else on television knows the rules anymore.