Seth Meyers on "Late Night" in the Donald Trump era: "We’re certainly excited to be doing comedy about politics at a time when politics is providing a lot of comedy"

The comedian talks with Salon about helming his show and his new offbeat mockumentary project "Documentary Now!" 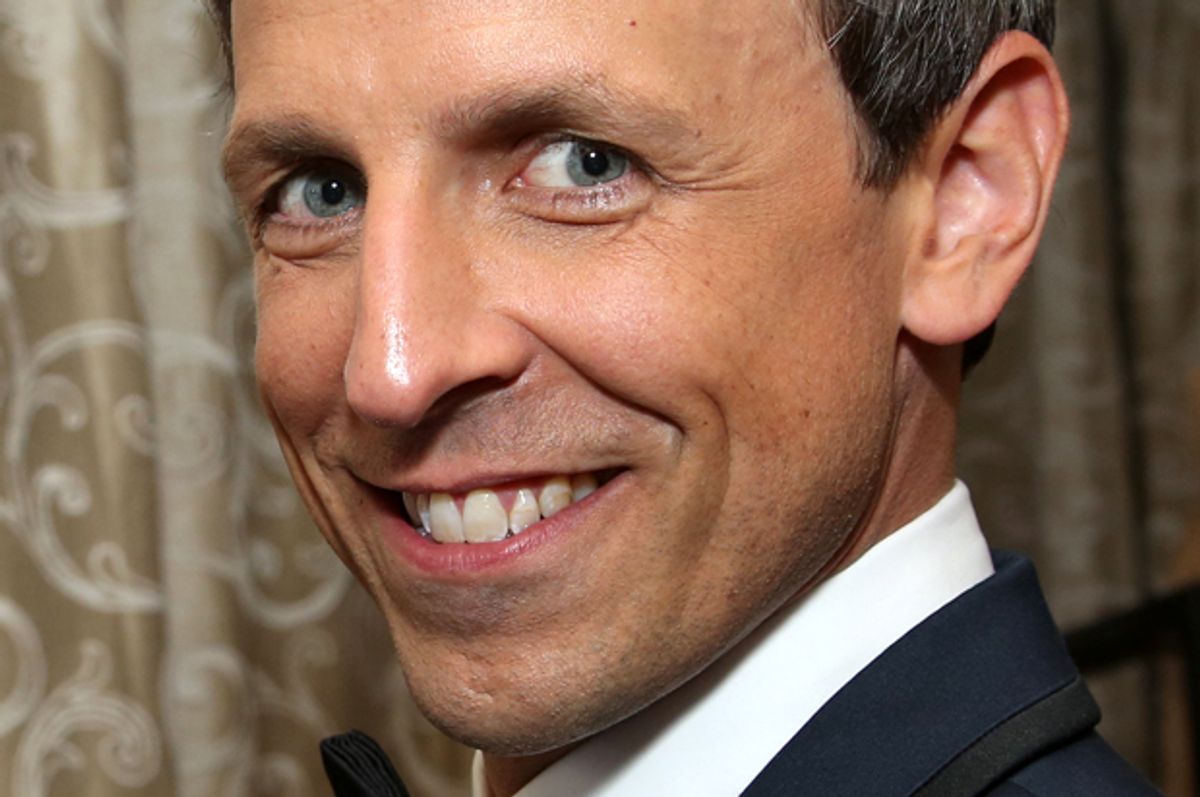 Seth Meyers is interested in the real. The comedian made his bones on “Saturday Night Live,” behind the “Weekend Update” desk, taking on politics and news with a deadpan humor that was never totally deadpan. Then he graduated to “Late Night,” NBC’s after-midnight talk show, to make jokes every night about current events. Now, it’s documentaries. On August 20, IFC will debut “Documentary Now!,” an odd little program that is the brainchild of Meyers and his friends and co-creators Fred Armisen and Bill Hader. “Documentary Now!” is a collection of vastly different documentary spoofs—taking a film genre beloved to all of them and finding a way to both pay homage to those originals and subvert them, too.

It’s a show that will delight many and confuse the rest; that seems to be fine for Meyers, who already has a day job. For this series, he’s entirely behind-the-scenes, as Armisen and Hader cavort around cat-infested houses with sweatpants on their heads (this is not a joke). “Documentary Now!” gives him a change of pace; and it gave me an opportunity to catch up with a late-night host 18 months into his run. In the talk-show musical chairs that has become late-night TV, Meyers’ ascent and tenure has become old news, overshadowed by Stephen Colbert’s ascension to David Letterman’s seat at “The Late Show” and the new shows from Larry Wilmore, James Corden, and of course newcomer Trevor Noah, who is taking over from Jon Stewart. I caught up with Meyers to talk about having his own show, switching gears, working with friends, and the landscape of political comedy.

“Documentary Now!” such a quirky project—and I love that it’s a friend-adventure.

I feel like it’s happening a lot more; you’re seeing more friend-adventures in comedy right now, and for friends who do comedy together it’s really nice. It’s a good time.

It also has the added affect of making the rest of us a little jealous.

People keep asking me, “How do you find time to do it?” and truthfully, I would have been so jealous had they done it without me. So ultimately I was willing to find the hours in the week to be part of it, just so I didn’t have to be bitter.

I liked the two episodes that I understood, but I was unfamiliar with “Nanook Of The North,” so I had some trouble parsing “Kunuk Uncovered.” There’s a high barrier for entry here—are you concerned about that?

I don’t think we’ve ever gone out and said, “Let’s go make this documentary that nobody can understand.” Documentaries certainly have this highbrow reputation, and we certainly didn’t want to do a show about our love of documentaries that dumbed it down so that it would appeal to everybody. Nothing would make me happier for a true documentary connoisseur to think, “This is the show I’ve been waiting for my whole life.” That being said, I hope that there’s enough comedy in the bones of all of it that makes it accessible to anyone, without needing some pre-education on the material.

But look, we know there’s some thin slicing here as to who our audience will be.

If you’re not familiar with the source material, the episodes can just seem like very strange, lost documentaries.

One of my favorites is the one with this Icelandic Al Capone festival, because Fred is really the only person you have any reason to recognize. Otherwise, you would just believe this 1996 travelogue-y type documentary about Iceland. And we like that part too, and that’s why we were so happy to get Helen Mirren [who hosts the show], and Helen plays it really straight. The other thing is we talked a lot about this conceit that this show has been on for 50 years—and we settled on 50 because it was “SNL”’s 40th anniversary. It’s a subtle burn at Lorne [Michaels, showrunner of “SNL”]; we wanted to create a fake show that’s been on longer than his.

I know that the late-night schedule can be quite grueling—is that why you’re not in front of the camera?

Yeah, that would have been the hardest thing. I was never on set a day of shooting for this—ultimately I could do writing and rewriting from home or from my office. But I should also stress: that’s not why I’m not in the episodes. I’m also not in the episodes because they’re so much better at this than I am, and I wouldn’t want people to be taken out of this project by seeing a guy who started out as a cast member on “SNL” until they said, “Why don’t you just sit behind a desk and be you? Because we think that might be easier for people to digest.” [Laughs.]

How does it feel for you to get to be a writer, behind-the-scenes, with your friends?

There were a lot of things that made me really happy on “SNL.” For example, telling a great joke on “Weekend Update”; that brought me a lot of joy. But also standing under the bleachers while something you wrote for guys like this also felt great. When you write for people like Fred and Bill they elevate your writing—and they trick people into thinking you’re a better writer than you actually are. That’s the thing probably more than anything else that I miss about those years: You would just write something and then turn it over to the really safe hands of these incredible actors. It was just really fun to be able to do that again.

How does writing this differ from your writing process on “Late Night”?

The biggest difference on “Late Night” is that I’m focused on picking something the day of—and then it’s a race to get it done in time for that night’s show or the next night’s show. It’s constantly charging ahead. On a Friday or Saturday, you can start thinking a little bit about what might be the story on Monday, but it’s more likely that you’re going to figure it out Sunday night. Whereas this is a completely different thing, where you can think about something for two months before you start writing it. So that’s why it fits in.

It’s an interesting time right now for political comedy; more and more people seem to want to get their news through a comedic lens. What do you think we’re tapping into, with this desire to filter politics through comedy?

All of us can only do the show that is most suited for us. I came from doing “Weekend Update,” which is about the news, and we wanted to have an element of that in “Late Night.” I’m mostly just excited to be part of this next wave of late-night hosts, and the thing I find hard to believe is that anybody who would want to watch a late-night show wouldn’t be able to find something they like in one of them—there’s a nice spectrum of different types of shows out there

But we’re certainly excited to be doing comedy about politics at a time when politics is providing a lot of comedy—and people are paying attention to it. Even at “SNL,” election years were always easier to write comedy for than when you’re trying to write a sketch about a government shutdown.

It seems that nightly talk shows shows used to be about viewers inviting a host into their homes, late at night to talk about comedy. Now most audiences access these shows via YouTube clips that circulate the next day.

It is different. But I think when you do these shows—especially with our show being a network show that comes on at 12:35 a.m.—the most important thing still is how many people can you keep watching that show, as it happens. I think that viral element is really important to us at well, since we still consider ourselves fairly new—even though it’s weird to talk about being new, when we’re almost one of the more senior shows. But we do try to focus most on the hour, as opposed to focusing on what’s going to be pulled out of it, and we’re hoping the better the hour gets, the more the best two minutes will live on the next day.

I also feel like while you’re in the era of Donald Trump, you may as well embrace the material.

What are your thoughts on Trevor Noah replacing Jon Stewart?

He’s the perfect person for that job. He’s really smart, and really sharp, and I can’t wait.