Just like with Obamacare, Republicans hate the Iran deal, but can't seem to agree on what they'd do instead 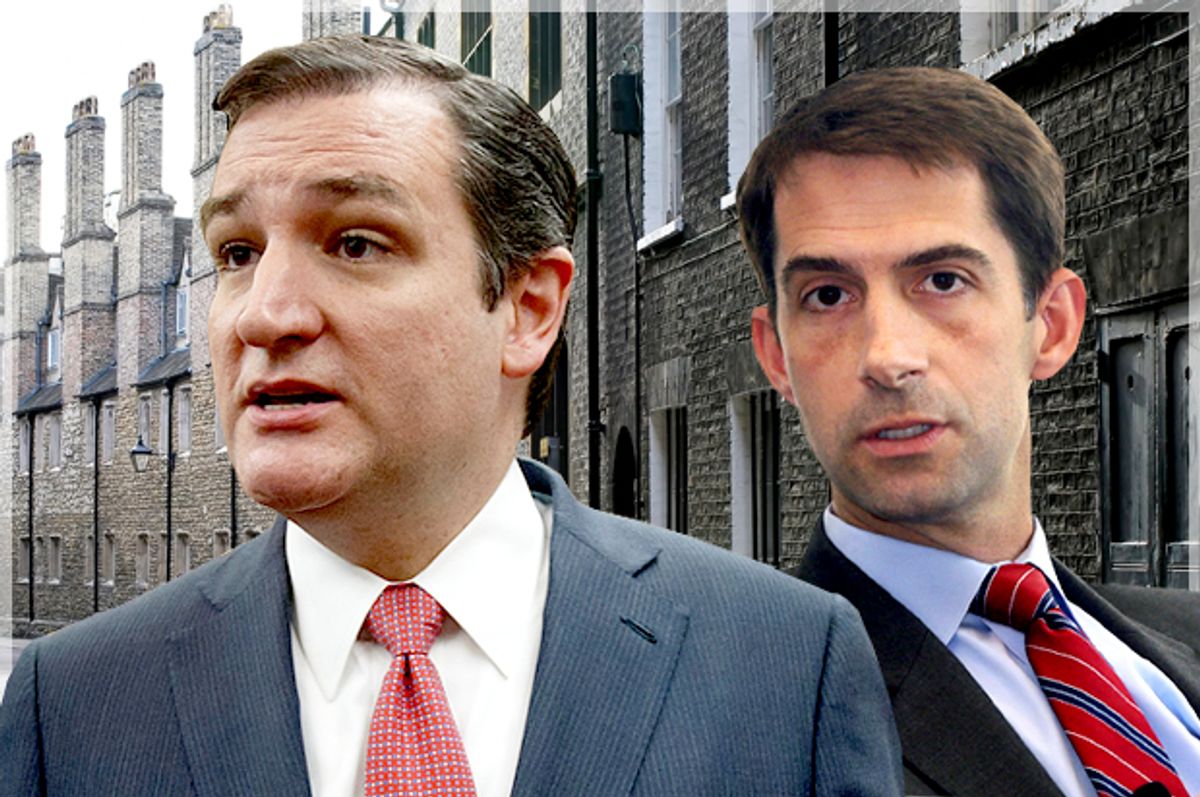 It’s looking more and more like Republicans will come up short in their bid to derail the multiparty diplomatic framework with Iran. The deal is currently grinding through its 60-day window for congressional review, and Republicans have been nurturing the barest flicker of hope that they’d be able to round up enough skeptical Democrats to pass a resolution blocking the removal of sanctions on Iran and override a presidential veto. It was an unlikely scenario in theory, and it’s become all but impossible now that some key moderate Democrats in the Senate – Virginia’s Tim Kaine and Florida’s Bill Nelson – are lining up behind the Iran deal. As the Washington Post’s Greg Sargent notes, the GOP would now have to round up nearly every remaining potential Democratic “No” vote in the Senate to sustain a veto.

But let’s suppose that the momentum were trending in the other direction, and Republicans were slowly cobbling together a bipartisan supermajority to rebuke President Obama and derail one of the most significant diplomatic agreements in recent history. What would be the Republican strategy for dealing with Iran and its nuclear ambitions in the aftermath of scuttling the deal? They don’t really seem to know.

GOP lawmakers who have declared their opposition to the nuclear deal with Iran have so far failed to articulate a detailed strategy for what would come next if they secure enough votes to derail the agreement.

Republicans interviewed by CQ acknowledged it would be incredibly difficult to reconstitute the international sanctions regime on Tehran if lawmakers vote in veto-proof margins to override President Barack Obama's promised veto of any resolution of disapproval.

“I’m afraid it’s a lost cause,” Sen. Ron Johnson, R-Wis., said last week. "I think once you lift these [international] sanctions, once everything starts flowing in, once investments start coming in from the West, you’ll never be able to stand up that coalition [again]."

This is the same dog-chasing-the-car dynamic that has always lurked beneath the surface of the endless fight over repealing the Affordable Care Act – Republicans know for certain that they’re dead-set against the thing Obama supports, but they can’t figure out what they would do once they get rid of it.

That quote from Ron Johnson is revealing because it puts the lie to what has, to date, been the standard Republican response for how to handle Iran after killing the nuclear deal. Republican candidates for the presidency have been talking tough about Iran, promising that they’d back out of the deal on day one of their administrations and then unilaterally impose sanctions that will “cripple” Iran. That position doesn’t make a ton of sense – sanctions work when they have buy-in from the international community, and it took decades of cajoling and wheedling to set up the sanctions framework that ultimately brought Iran to the negotiating table. Johnson just acknowledged that it won’t be possible to recreate that environment should the U.S. renege on the deal.

But let’s assume that the Republicans pull off an upset and manage to pull together a veto-proof majority to reject the deal, or that a Republican president is elected in 2016 and follows through on his promise to back out of the Iran deal. The United States would be back in the position of heavily sanctioning Iran in pursuit of the “better deal” that Republican and conservative critics insist can be negotiated. What could they expect to happen in that situation? Well, a recent analysis from the Brookings Institution throws cold water on the idea that a unilateral approach to sanctions would produce favorable policy outcomes:

The history of U.S. policy since the Islamic Revolution offers little reason to be sanguine about a go-it-alone approach on Iran. Trying to sustain Iran's economic isolation without the participation, or at least the acquiescence, of the rest of the world's major powers would inevitably pose fewer costs for Tehran and greater expenses for Washington in terms of transatlantic relations and American influence around the world. And, based on the track record of the nuclear negotiations since 2002, it almost surely would generate an even less favorable resolution to Iran's nuclear ambitions.