Beyond Cecil the Lion: The grisly and unethical world of wildlife killing contests

Every year across the United States, thousands of animals are slaughtered in state-sanctioned gun-fests 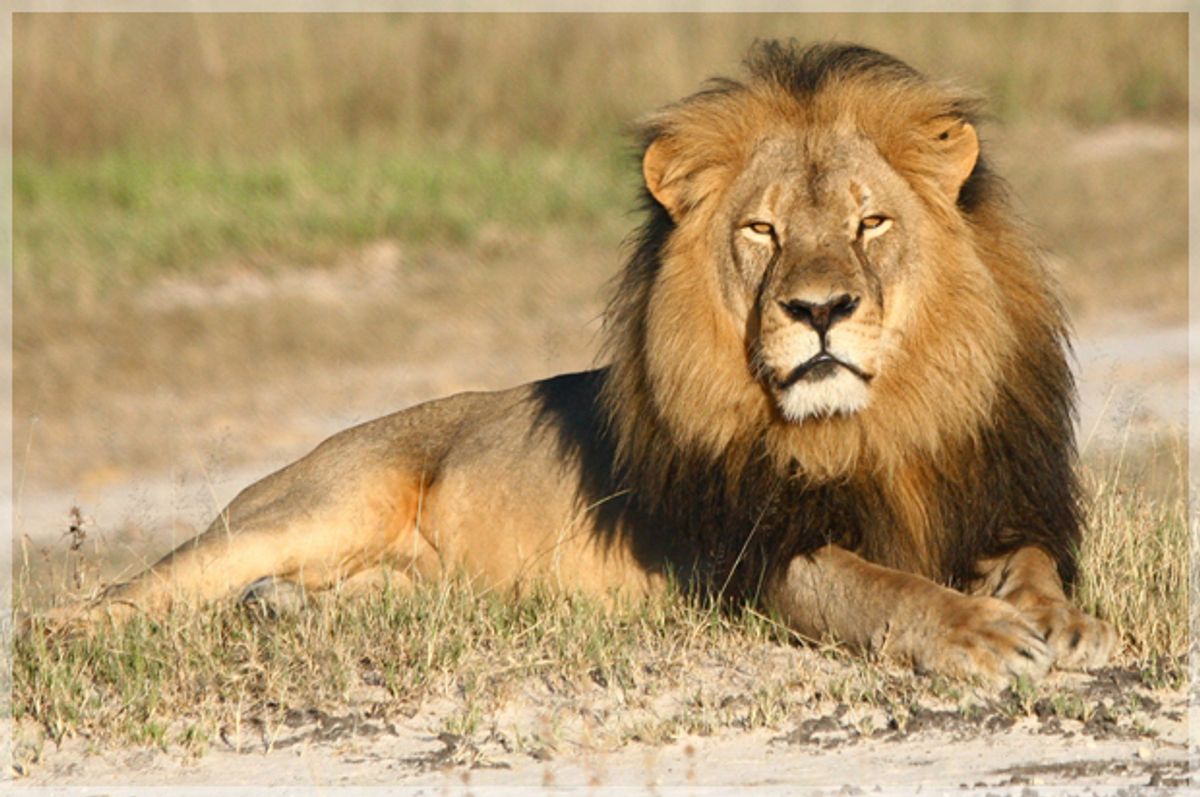 The most targeted species is the coyote, but WKCs target a wide range of species: Wolves, bobcats, badgers, foxes, skunks, prairie dogs and birds are all in the crosshairs. "Each of these species is a key part of healthy, functioning ecosystems," asserts the Center for Biological Diversity (CBD). "Killing contests devalue native wildlife and glorify wasteful killing, while disrupting natural processes … [WKCs] ignore the ecological value of their target species and can actually exacerbate conflicts with livestock. Peer-reviewed studies on coyotes and wolves demonstrate this result."

In December, CBD and nine other conservation groups including WildEarth Guardians, Rio Grande Chapter Sierra Club, Animal Protection Voters and Southwest Environmental Center, called for a ban on wildlife-killing contests in New Mexico after a national ranking gave the state the dubious distinction of holding more WKCs annually than any other state. Between August 2013 and July 2014, around 130 WKCs were held across the United States — at least 17 of them were held in the New Mexico.

Less than a month later, SB 253, a bipartisan bill to ban coyote-killing contests in the state, was introduced by Senator Mark Moores (R-Albuquerque) and Representative Jeff Steinborn (D-Albuquerque). The co-sponsors emphasized that the bill would not prohibit the killing of coyotes to protect livestock, but opponents — mostly farmers and ranchers — maintained that the contestsprovided an incentive to reduce the predator population.

"In wildlife killing contests, participants attempt to kill as many animals as possible for money, hundreds of even thousands of dollars, and prizes," according to the Encyclopedia of Animal Rights and Animal Welfare. "The events conclude at a checkout station where participants pile up the dead animals for photographs before dumping the bodies elsewhere."

Conservationists aren't the only ones up in arms about these horrific events. After one such contest in New Mexico in December, nearly 40 dead coyotes were unceremoniously dumped to rot in the desert near the Las Cruces airport, eliciting the ire of a local hunters' group, which said it epitomized “the distastefulness of killing anything for blood sport and then throwing it in the public’s face.”

The Albuquerque Journal editorial board gave their support to the proposed legislation:

The 2015 version of a ban is a narrowly crafted bipartisan proposal that protects the rights of true sportsmen, ranchers and residents by ending one thing, and one thing only: the practice of shooting as many coyotes as quickly as possible. Because that’s what coyote-killing contests are all about – killing not because the animals pose a threat, or because the pelts and meat will be used, or because there’s a trophy to be mounted, but because it’s fun to shoot a whole lot of living things …

New Mexico has a long and proud history of hunting and ranching, and co-existing with nature. All require a respect for wildlife and its ecosystem. And like once-legal cockfighting before it, coyote-killing contests are about bloody death and nothing more. Lawmakers on both sides of the aisle in both chambers should take a close look at Moores and Steinborn’s legislation and pass it on for the governor’s signature so New Mexicans never have to look at a pile of coyote carcasses again.

While the bill was passed by the Senate, it was tabled in a House committee in February. Activists remain committed to pushing for the passage of this legislation, which is widely supported by wildlife scientists and researchers.Fifty scientists recently signed a letter supporting a ban on WKCs, citing peer-reviewed studies that show there is "no credible evidence that indiscriminate killing of coyotes or other predators effectively serves any genuine interest in managing other species, diffusing the primary argument of killing contest proponents that they help reduce livestock losses or increasing deer populations."

“Most people are shocked to learn that it is legal to kill coyotes, foxes, bobcats and other wildlife as part of a tournament for prizes and recreational fun,” Camilla Fox, founder and executive director of Project Coyote, told the San Francisco Chronicle. “They’re even more shocked to learn that hundreds of such contests take place each year in the U.S. killing thousands of wild animals.”

Project Coyote, along with CBD and the Western Watersheds Project (WWP),filed a lawsuit in November against the Idaho Bureau of Land Management for granting a five-year permit for an annual, privately-sponsored WKC in the state. The yearly killing contest includes prizes for gunning down a wide variety of wildlife species, including wolves, coyotes, weasels, skunks, jackrabbits, raccoons and starlings, across a large section of eastern Idaho. The CBD and WWP also submitted an alternative Special Recreation Permit (SRP) to the BLM for a wildlife-viewing contest for the same dates and locations as the killing contests.

“It’s repugnant and shocking that wildlife-killing contests are still being allowed in the 21st century," said Amy Atwood, CBD's endangered species legal director. “In approving this contest, the BLM is out of step with an American public that no longer supports the slaughter of wildlife for sport. Indeed, more than 90,000 people submitted comments opposing the contest, yet the permit was still issued."

Travis Bruner, WWP's executive director, wrote in the Huffington Post that WKCs are not "hunting" in the traditional sense:

Only rarely are wildlife hunted for subsistence in the modern United States. With few exceptions, most of today's hunters engage in what could only be described as a distortion of what was once a basic human survival strategy. Some modern hunters demonstrate respect and admiration for the natural world. But a killing contest is nothing but a violent slaughter of defenseless creatures where the trigger-pullers seek glory, not protein.

Though the Idaho BLM issued the killing contest permit, the Idaho Department of Fish and Game (IDFG), which manages wildlife in trust for the public and determines hunting regulations in Idaho, also has the authority to stop the unnecessary carnage. In 2000, the IDFG Commission adopted a Predator Management Policy, stating that the department "will not support any contests or similar activities involving the taking of predators which may portray hunting in an unethical fashion, devalue the predator, and which may be offensive to the general public." There can be no doubt that WKCs qualify for this kind of activity.

"Although it is too late to preventCecil’s appalling death, we can put an end to killing sprees here at home," said Bethany Cotton, director of wildlife programs at WildEarth Guardians, in an email. "Thousands of our nation’s native animals are targets of killing contest participants’ bloodlust. These contests disrupt the natural balance of ecosystems, perpetuate false myths about keystone species, threaten public safety and disrupt quiet non-consumptive uses of our public lands."

“Awarding prizes for wildlife-killing contests is both unethical and inconsistentwith our current understanding of natural systems,” said Michael Sutton, president of the California Fish and Game Commission. “Such contests are an anachronism and have no place in modern wildlife management.”