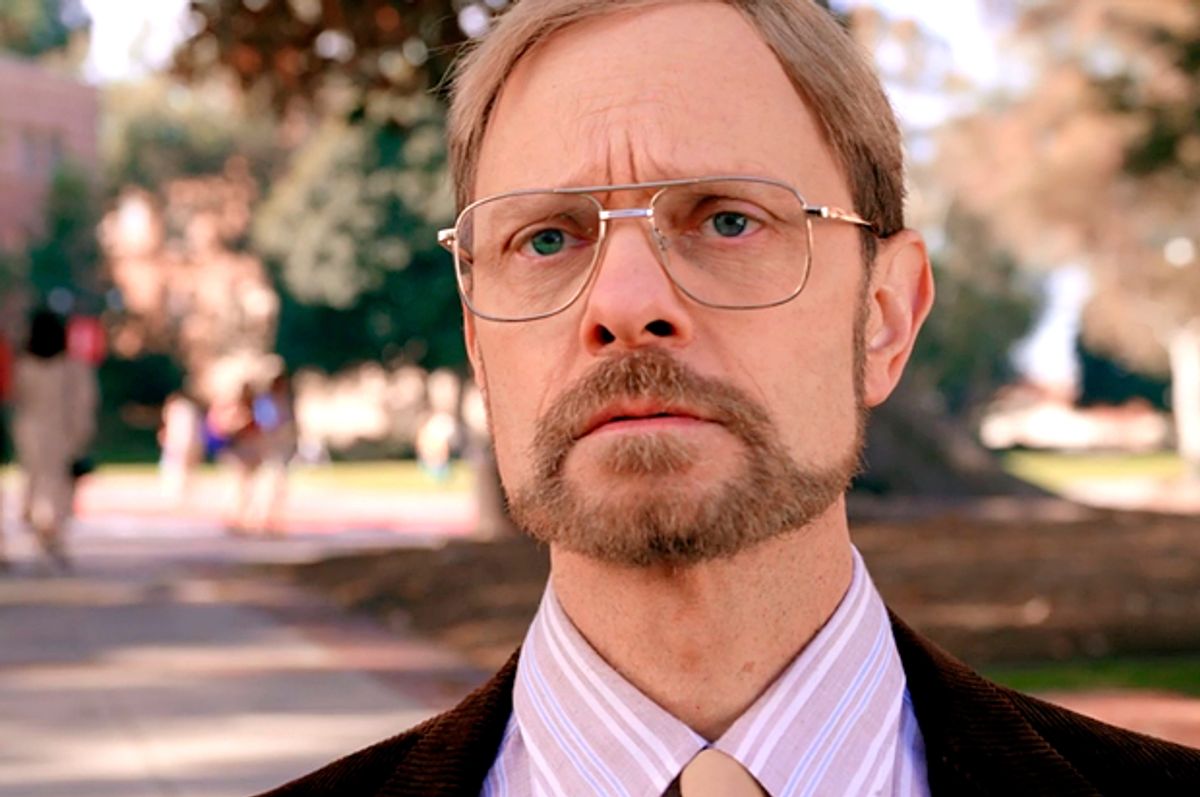 There are a lot of wonderful callbacks and origin stories baked in to Netflix’s “Wet Hot American Summer: First Day of Camp” prequel series, from the epic journey of H. Jon Benjamin’s can of vegetables to the truth about mysterious easter egg of a character Jim Stansel. But by far my favorite bit of exposition was one of the series’ briefest: The genius standalone short film at the beginning of episode four that depicts associate professor Henry Newman, played by David Hyde Pierce, in his failed quest to get tenure.

Perhaps because most subplots were shot separately due to the actors’ labyrinthine shooting schedules, the series featured a series of “Saturday Night Live”-style cold opens that worked beautifully as standalone sketches: Ken Marino’s prank phone call to Christopher Meloni; Elizabeth Banks pitching her story at “Rock and Roll World” Magazine. Yet while both of these segments would go on to have ramifications for the show’s “plot,” Pierce’s segment was unapologetically tangential in a way that only a franchise as deeply committed to absurdity and fan service as “Wet Hot” could pull off. And that’s what made it so darn delightful.

The segment takes a throwaway character detail from the film — the fact that Henry is only an associate professor, having failed to get tenure — and blows out this niche concern of academic hierarchy (in a series that has absolutely nothing to do with university life or higher education) into a detailed character drama. During of our brief visit to Henry’s past, viewers are treated to a full-fledged emotional arc and a fully-realized universe of characters — Henry’s unhappy ex-wife, his workplace confidante, his self-righteous boss (Richard Schiff), his manipulative nemesis (Rob Huebel) — that goes from 0 to 100 out in a rollicking four minutes. The greatness of this segment is how it takes a fairly trivial bit of workplace politics and tips it into melodrama, as Henry's repeated inability to "play the game" at work gradually causes him to unravel. And of course, it is chock-full of the sort of throwaway jokes and visual gags that creators Michael Showalter and David Wain excel at, like the fact that the esteemed astrophysicist is teaching his students the Pythagorean theorem, or the fact that tenure is announced with a note on a bulletin board like the cast of a high school play.

What’s more, in a show that relies so much on ensemble work and incongruous pairs of actors playing off each other (Bradley Cooper and Michael Ian Black’s magical chemistry, for instance) it’s a delight to see Pierce essentially putting on a one man show, unconnected to the storylines of any other main characters. The bit works so well not just because Pierce is so brilliant in it, but also because fans have been deprived of his singular brilliance on the small screen for such a long time. Indeed, Pierce hasn’t been on TV much since “Frasier," apart from his turn on the “Good Wife,” where he didn’t have much of an opportunity to flex his comedic chops. This segment, then, was a veritable gift to “Frasier” fans, particularly because of how much Henry has in common with Niles Crane, the ultimate David Hyde Pierce character: A man whose uptight, bookish earnestness conceals a bubbling rage and neurosis that can be unleashed at any moment.

Anyone who watched “Frasier” will know that Pierce is a genius physical comedian, a master of gesture and mannerism whose greatness sneaks up on you because he generally plays characters defined by intellect and verbosity (“indoor kids,” as Henry might say). Few actors nowadays are equally cerebral and physical in the way Pierce is, and this segment allows him to showcase both elements — from his excruciatingly earnest delivery of ridiculous lines like “I know I'm not very good at playing the game. Maybe that's because science isn't a game to me!” — to his increasingly manic ticks and physical outbursts as the scene progresses. It reminds me a lot of the five-minute one-man scene at the beginning of Frasier’s “Three Valentines” episode, which shows Niles getting increasingly frazzled preparing for a Valentine's date as dramatic music plays in the background, much like how Henry’s fevered typing amid rising percussive music ramps up to his eventual explosion.

And of course, this segment showcases Pierce’s unique ability to exist in comic and tragic registers simultaneously. As was often the case with Niles, it's Henry who is the sole butt of the joke here, and Pierce's self-deprecating charm and hangdog expression makes you genuinely feel the character’s pain -- remember kids, associate professor means less than -- even as you’re laughing along with him.

Anyway, after getting fired from his job, we find out how Henry comes to vacation opposite Camp Firewood and ultimately find love in the arms of Janeane Garofalo's Beth, as he takes a lease on a cabin in the woods to unwind. “It’s perfect,” Henry declares. “I’ll take it.” And then, just like that, he all but disappears from the series.

In my opinion, this might be the funniest choice of them all. One of the greatest joys of “Wet Hot” is seeing our favorite actors return and reprise their old roles — as well as the meta element of seeing just how these actors will be reintroduced — and I for one had been waiting to see when Pierce would finally show his face. Lest we forget, he was one of the few known actors when the film premiered in 2001, having already won three Emmys for "Frasier" at a point when Bradley Cooper and Amy Poehler were complete unknowns. Watching the man who brought us Niles Crane in this four-minute, one man tour-de-force was an utter joy, the sort of nostalgic gift that you hope against hope a reboot of a cult favorite might deliver. And as I waited for him to show up again over the next four episodes and realized that that was all we were going to get of him, the bit became even funnier in retrospect. Well played, Wain and Showalter — well played.