Donald Trump is America: Why the bloviating billionaire is the national embarrassment we deserve

In all of his perversity, Trump represents everything corrosive and unequal about the good ol' US of A 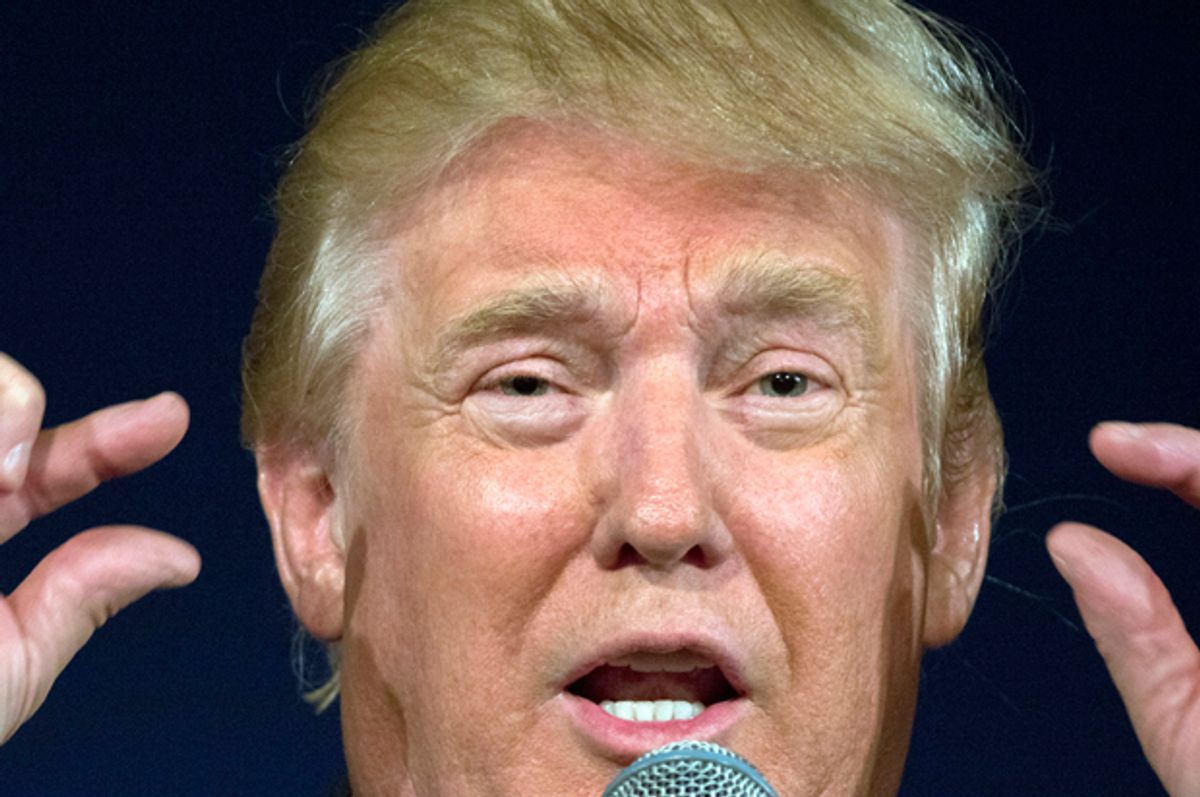 It has always been well known that you do not have to be particularly intelligent to become rich in America -- sometimes all it takes is being born to the right person. Back in the Gilded Age, robber-baron industrialists like Andrew Carnegie and Cornelius Vanderbilt were largely uneducated, and made their fortunes with “street smarts” and ruthlessness, two traits that are invaluable in the darwinian world of capitalism.

Today, we have been reminded of this fact with the loud and unlettered bloviating of Donald Trump, who, lucky for him, was blessed with both an inherited fortune and an aptitude for ruthlessness. Over the past month or so, Trump has regurgitated every impetuous thought that has popped into his nitwitted mind, just to see how much attention he can possibly garner from the media. As the feeding frenzy progressed at a rapid clip, the Huffington Post decided to put all things “Trump” into their entertainment category, while the GOP establishment largely condemned him for his outlandish comments -- in particular about prisoners of war in Vietnam.

(Of course, Trump was too rich to risk his own ass in Vietnam.)

Trump, in many ways, is a “sideshow,” as Huffington Post said in justifying its decision to place him next to "True Detective" recaps. At the same time, however, he is the current front-runner in the GOP primary. Can we really discount the man as a joke if he is more than 10 points ahead of his next competitor, Jeb Bush?

While Trump is a great embarrassment to America, and is about as presidential as Archie Bunker, he is also a reflection of the current state of our culture -- a culture that embraces mindless materialism and entertainment, while shunning deep thought and intellectualism. It is a culture that has been ransacked by consumerism and corporatization, where our universities have been transformed into careerist trade schools rather than places where young people go to broaden their horizons and learn how to question things, including authority.

Today, the most popular major in college is business, a field that not too long ago required little to no education, and where the wealthiest individuals were successful because of their amoral and cutthroat tendencies, not because of what they learned at the university. The mind-set that the majority of young people are sent off to college equipped with is "How much money will this education allow me to make," and "Will this major get me a job right out of college." At the same time, colleges have become completely corporatized. Tuitions have skyrocketed over the past decade (enslaving low-income students with debt), and at the "elite" schools, this is reflected by the proportion of rich to poor students: 74 percent come from the top quarter of the socioeconomic scale, while only 3 percent come from the bottom quarter. Meanwhile, “administrators” have become as well paid as corporate executives, while tenure for professors is in decline.

No longer are students taught to question systems or authority, but to become worker bees for the corporate state economy. (Who knows, maybe some will be lucky enough to work for Trump!) Moral values and autonomous thinking are no longer expected to be promoted in higher education. This, of course, goes way beyond modern universities, which are just features of the corporate state.

Modern society has more distractions than ever before. It is the world that Aldous Huxley predicted in his novel “Brave New World,” where the populace became so consumed in their own little bubble (think Facebook and Netflix) that they lack any understanding of the world around them. It’s a world where pleasure and consumption are fueled by debt, and people spend their entire lives working for corporations to pay off that debt. It is a vicious cycle that has worked incredibly well for the political and economic elites, while turning the lower class majorities into consumer drones, born and raised to grow up and become worker-bees like their parents, without a thought of dissent inside of them.

The rapid rise of Trump in American politics is a sign of our decaying public consciousness, where being filthy rich gives people the ability to do what they want, when they want, even when they very clearly have no idea what they’re talking about. Trump has become a political sensation because he reflects what success has become in modern America -- namely, completely monetized -- and even though the statistics reveal that growing up in the middle and lower classes severely restricts one's chances of becoming wealthy, the idea that you can go to college, and take on hundreds of thousands of dollars in debt, and then become successful like Donald, remains alive and well.

However, the truth is that being born into wealth, as Donald Trump was, is the greatest tool to becoming a wealthy elite in America, much like it was in the time of serfdom, when a certain few were lucky enough to be born to a landowner, while the unlucky majority were born to peasants.

Our entire society has been carefully engineered to prevent dissent. The majority of college students, who have historically been voices of dissent, care little about our economic system or how it is inherently oppressive, instead focusing on how they can work their way up the ladder and make enough to pay off their student loans and home mortgages. Working-class people are programmed from youth to be enamored by the rich and famous, the reality TV stars and actors and athletes, while they can hardly afford rent. The fact that so many people fail to see what is wrong with this shows how effective the effort has been.

Donald Trump can be placed in the entertainment section, but that isn’t going to change the fact that our culture has been completely fractured by the corporate state and the consumerism that has allowed our current plutocracy to form.