GOP undercard debate: Carly Fiorina and Bobby Jindal declared to have won the battle nobody bothered to witness

They may have made great points, but no one was there to witness them doing so 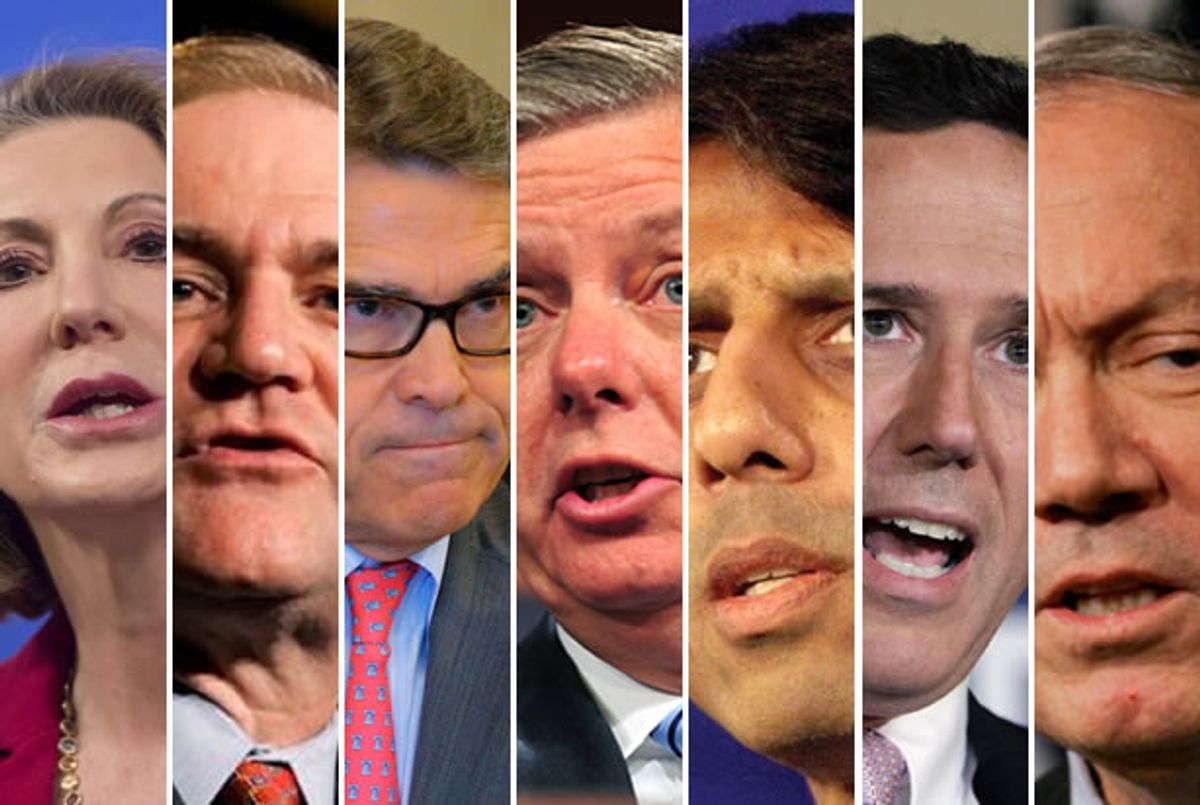 Fox News flash polls have declared Carly Fiorina and Louisiana Governor Bobby Jindal to be the winners of the GOP's undercard debate -- though whether it's possible to win a debate no one watched, either live in the arena or on television, remains to be seen.

The debate opened with Bill Hemmer and Martha MacCallum demanding the candidates to justify their presence on the dais in the form of a question about why they were seeking the GOP nomination.

Former Texas Governor Rick Perry insisted that he was ready to occupy the highest office in the land in a way that he wasn't in 2012. Carly Fiorina said that her experience at Hewlett-Packard made comparisons to Margaret Thatcher valid. Former Pennsylvania Senator Rick Santorum said his "moment has not passed," and used his losing primary campaign in 2012 as proof that he could win the general election in 2016.

Louisiana Governor Bobby Jindal responded to Martha MacCallum's question about Hillary Clinton beating him in his home state by listing all of his "accomplishments," including gutting the state budget and offering tax breaks to corporations. South Carolina Senator Lindsey Graham said that he would focus on energy independence from people who "hate our guts," because they "hate our guts."

Also, he added, they "hate our guts."

Former New York Governor George Pataki characterized himself as an outsider, saying that in 2012 he was "ready to lead, but not ready to run." Former Virginia Governor Jim Gilmore spoke about "reversing the decline" introduced by President Barack Obama and Hillary Clinton, though in what capacity the latter did so he didn't deign to specify.

MacCallum mentioned that "like it not, there's a huge disparity between the poll numbers you have" and Donald Trump's. Rick Perry used this as an opportunity to speak about his immigration credentials. Carly Fiorina knocked Trump for donating to the Clinton Foundation, suggesting that he's a Democratic plant, if only because no one knows what principles he would govern on.

Hemmer asked Jindal about ISIS, and the Louisiana governor said that he would refer to "the enemy by name," which he said the current president has steadfastly refused to do. Graham called for ground troops in Iraq and Syria, and claimed that anyone who says otherwise is lying to the American people.

The debate then turned to ISIS at home, and MacCullum asked Pataki about the president's "reluctance to label these terrorists as Islamic extremists," asking him whether he'd put mosques under surveillance given conservative's increased interest in religious liberty. Pataki replied that he doesn't consider extremism to be protected speech, and that he would go after any Muslim who appeared to be doing the equivalent of screaming "Fire!" in a crowded theater.

MacCallum asked Fiorina about whether the government should be allowed to violate individuals' privacy by demanding tech giants allow for greater surveillance. She replied that all of the homegrown attacks had "warning signs," and that better coordination by the government could recognize those "signs" earlier without "tearing down cyber-walls." She did, however, add that America needs to invest in tearing down other cyber-walls, the ones around ISIS, Iran, and China in particular.

Jim Gilmore forcefully agreed that the only way to stop this "international guerrilla movement that threatens this country" would be to have the intelligence community cooperate with law enforcement, but Hemmer cut him off and said that they needed to address immigration.

He asked Santorum, "What would you say to a child who was born and raised in America [and] whose family would be broken apart by your policy?" The former Pennsylvania senator replied with a canned story about his grandfather coming to America while his father remained in fascist Italy. Perry replied to a similar question with a slightly different answer, saying that the American people are never going to trust Washington until they have someone who goes into office with "the express purpose" of dealing with immigration.

As the debate ranged well beyond its hour-long running time, the candidates were allowed to deliver prepared stump points, with the buzzer rarely, if ever, needing to be sounded. It was, all in all, a tepid affair befitting the quality of the candidates it showcased.