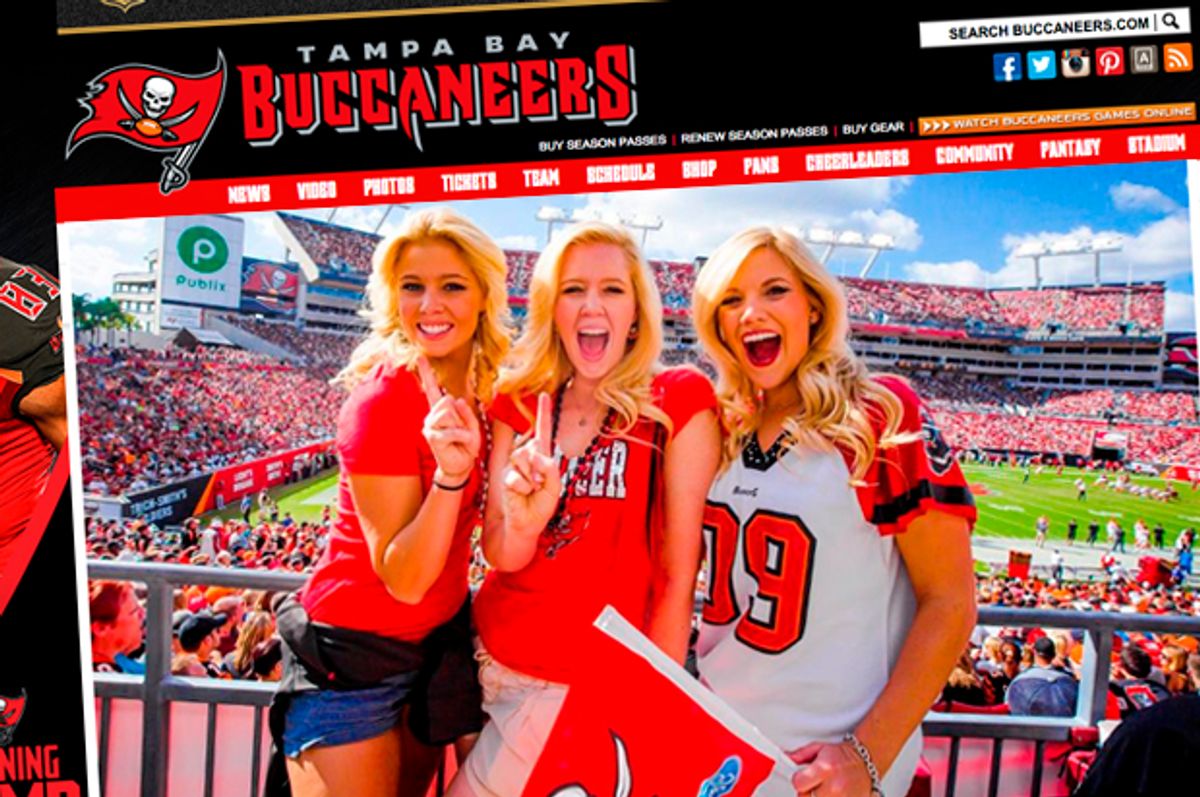 We’re excited, everyone. Can you feel it? There’s a new women’s movement growing – it’s starting in Florida, with the Tampa Bay Buccaneers, but it could spread to wherever you live:

A bold, new movement aimed at changing the way female fans connect with their home team and own their individual football experience is sweeping across the Bay Area and the Tampa Bay Buccaneers are leading the charge. RED is a movement that will be led by the women of Tampa Bay, alongside the Buccaneers, to become innovators and leaders in changing the way football is enjoyed by women. All women of the Tampa Bay Area are invited to join the movement and help usher in an exciting, new era for female fans across the region.

So begins a story on the Tampa Bay Buccaneers website. Surely, it seemed like a good idea to someone. But we’re gonna count it as the worst idea since Whole Foods tried to charge $6 for asparagus water.

It’s not just because it's faux-feminist marketing for an unapologetically sexist idea — that women need to be coaxed into liking football with elementary explanations and decor tips. It’s not just the fact that it rolls out at the same time as the cheerleaders-in-swimsuits calendar. It’s the whole mansplaining element of it. Just check out the “RED Term of the Week: “Play Clock.”

It’s ending up as the most retro-gender “movement” we’ve seen in a long time.

Let’s take a closer look at what RED is about. In addition to an emphasis on home entertaining ("creative culinary creations"), the campaign also focuses on "gameday style tips" and :

RED will provide female Buccaneers fans with year-round educational experiences focused on providing a better understanding of the game, along with unprecedented access to their favorite team. In addition, RED will re-invent the female fan experience by providing insight into topics such as: what goes on behind the scenes on gamedays at Raymond James Stadium; how to maximize their gameday experience; how to blend personal Buccaneer pride with the latest NFL fashions; as well as tips on sharing their experiences and ideas via social media platforms such as Pinterest.

Are there women who could stand to learn more about sports in general and football in specific? Sure, but the same could be said of men. And sports teams have a financial incentive to get as many people into the stadium as possible. But this is clearly not the way to do it.

The whole effort seems driven by the outdated idea that men know about football and women don’t. That was probably partly true at some point, but the explosion of female sports over the last decade or two – the popularity of women’s basketball, women’s Olympic events – make the Buc’s effort seem a bit half-century ago.

The millions of women who play fantasy football show that plenty of the fairer sex don’t need a patronizing “women’s movement” like this one. (“The start of the pro-football season on Thursday isn’t just a national holiday for America’s men,” a New York Daily News story last September reported, adding that “more and more women are getting into the second national pastime by drafting their own virtual NFL teams.”)

As for RED, social media has not been kind. “Next up for the Buccaneers: our advice on what skirts women should wear to games,” football journalist Mike Freeman writes. “What in the name of sexism is this, ‪@TBBuccaneers?” asks Sports Illustrated editor Stephanie Haberman. (Here’s a pretty good list of angry tweets.)

Could some women benefit from a primer on how football works? Sure – some men, too. But this seems like a way to insult women who might be interested — are they any less likely to know the difference between the play clock and the game clock than neophyte male fans? And would a team try to entice male fans to buy season tickets through a campaign of "gameday style tips" and tailgating recipes? Doubtful.

The term “mansplaining” – associated with the Bay Area nonfiction writer Rebecca Solnit, who may or may not have coined it -- isn’t always fair. Not every attempt by a man to explain something is arrogant, sexist, or whatever. But this attempt to get women up to speed on Tampa Bay football, complete with fashion tips and cheerleaders in swimsuits – deserves to be part of its dictionary definition.