After telling a canned story about his father, Santorum quickly lost the plot 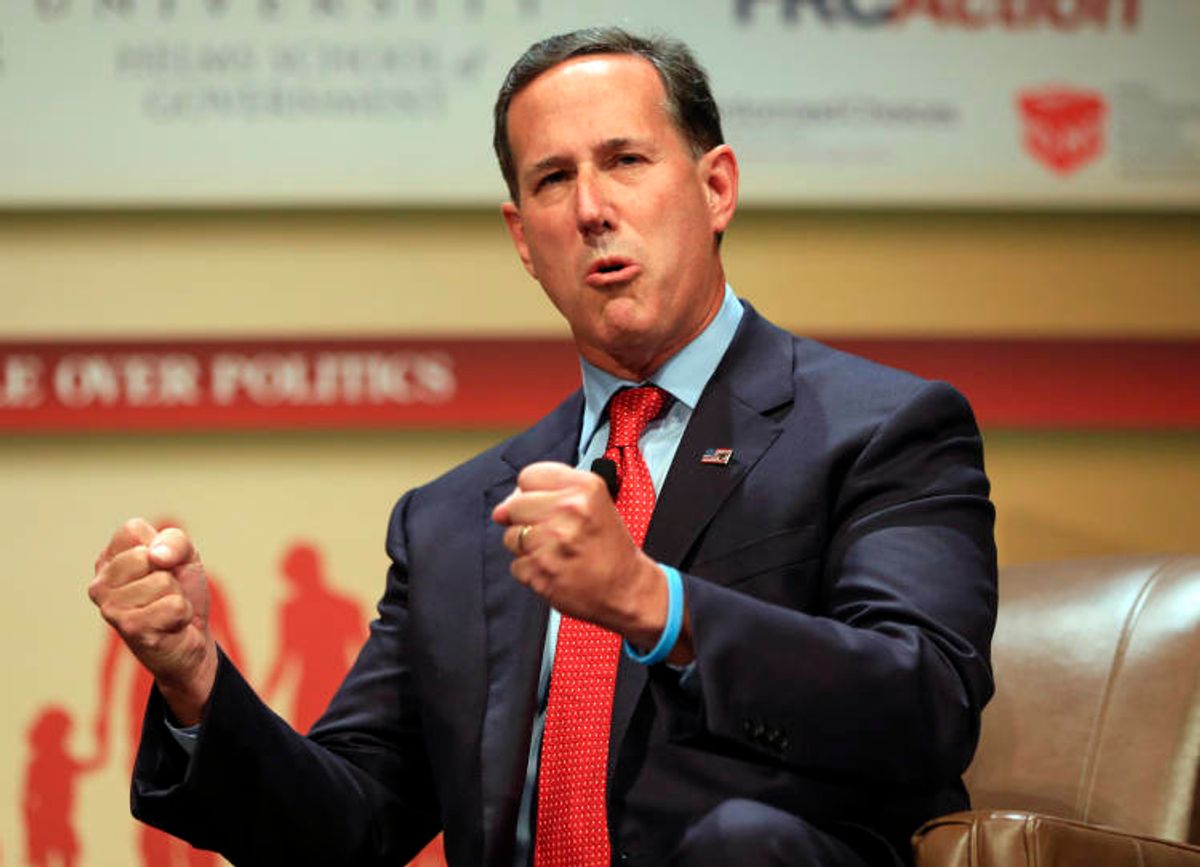 FILE - In this July 18, 2015, file photo, Republican presidential candidate, former Pennsylvania Sen. Rick Santorum, speaks at the Family Leadership Summit in Ames, Iowa. As next months first GOP 2016 presidential debate looms, prospects are doing everything they can to improve their polling and chin themselves into a top 10 position to meet the criteria set by Fox News Channel to appear on stage Aug. 6 in Cleveland. Rick Perry is waging a one-man war on Donald Trumps credibility, calling the bombastic billionaire a cancer on conservatism. Santorum, a conservative icon, popped up on a favorite program of liberals, the Rachel Maddow Show. And South Carolina Sen. Lindsey Graham set his phone on fire.(AP Photo/Nati Harnik, File) (AP)
--

During the undercard debate, moderator Bill Hemmer asked Rick Santorum a reasonably tough question about his draconian immigration policy suggestions. "What would you say to a child who was born and raised in America [and] whose family would be broken apart by your policy?"

The former Pennsylvania senator replied with a canned story about his grandfather coming to America while his father remained in fascist Italy. When he asked his father -- who was able to immigrate seven years later -- whether he was angry at the United States for denying him entry for so long, he allegedly said "America was worth the wait."

As soon as he went off-script, however, Santorum lost the plot. "We're a country of laws, Bill, not of men -- not of people who do whatever they want to do."

"I know we have a president who wants to do what whatever he wants to do, to take his pen and his phone and tell everybody what's best," he said. "But the reason America is a great country is the compassion is in our laws."

"When we live by those laws and treat everybody equally under the law, that's when people feel good about being Americans," Santorum continued, adding that the 35 million undocumented immigrants who have to the United States in the past 20 years are "unskilled workers, flattening wages, creating horrible lack of opportunities for unskilled workers."

He insisted that he would be trying to make like better for "unskilled" Americans, though he didn't have time to explain exactly how before Hemmer turned his attention to Rick Perry.