The GOP's mind-blowing gun-control hypocrisy: Americans have the right to bear arms — except at our debates! 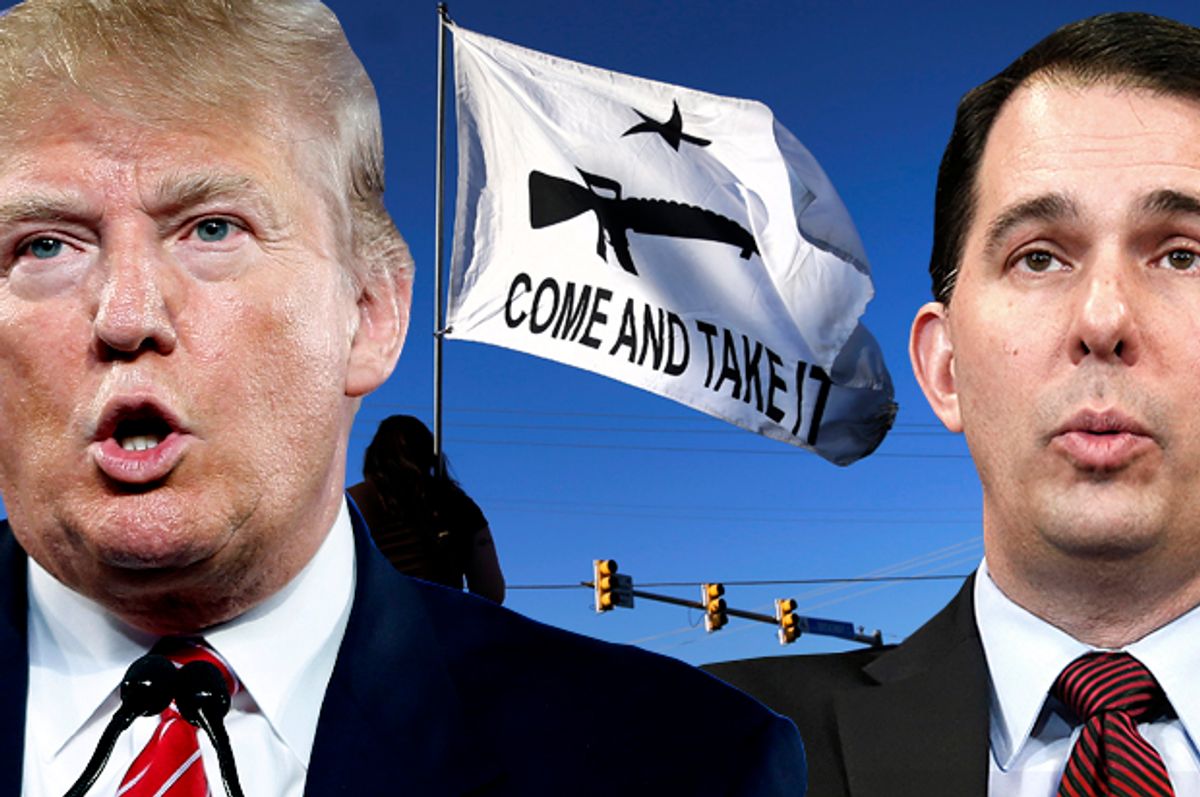 After each of the recent spate of mass shootings that have haunted America over the past several years, Republicans’ delusional response has remained the same: More guns would have allowed the good guys to stop the bad guys. And yet audience members will not be allowed to bring concealed weapons to tonight’sGOP debate.

The debate will be held at Cleveland's Quicken Loans Arena, which does not allow firearms even with a concealed carry permit. Similarly, the GOP held a forum earlier this week at St. Anselm College in New Hampshire, and will hold another debate there in February. When asked whether St. Anselm allowed guns at the debates, a college representative answered, “Absolutely not.”

This is interesting when you consider the positions and policies of the various Republican candidates:

So why is the Republican Party, which loudly espouses the safety benefits created by average folks packing heat wherever they go, holding its debates in venues that don't allow concealed weapons? If Trump, Cruz, Bush, and their ilk think unlimited access to guns makes the general public safer, why do they take such a different stance on their own safety—even though they, unlike the average citizen, will no doubt be guarded by their own personal security detail?

The disconnect hasn't been overlooked.

“That’s the difference between the political ruling class and us,” said Tom Zawistowski, Executive Director of the Portage County Tea Party—a group located about an hour outside of Cleveland. Zawistowki will be attending tonight’s debates. Zawistowksi said he’d had to pass a background check in order to attend, and that security at the event would likely be high. Zawistowski blamed the RNC for the double standard. “These people have never impressed me with their sensitivity toward our issues. Knowing them, I don’t think it crossed their mind. They’re thinking, ‘Are we gonna raise enough money?’”

Buckeye Firearms is a group that advocates arming personnel at K-12 schools and provides training for school employees to receive concealed carry permits. Jim Irvine, the organization’s chairman, agreed that it was hypocritical on the part of the GOP. “It’s nonsense to say, ‘Hey, our people can carry guns,’ and then not allow them at the debates.”

The GOP’s October primary debates will be held at University of Colorado Boulder. Following a 2012 court decision, the university was forced to allow students with concealed carry permits to bring their guns to campus and to class. After Jerry Peterson, a physics professor and then-chair of the faculty assembly, said he would cancel his class if he saw a gun in the classroom -- “I want my students to feel unconstrained in their discussions,” he said, something he felt arming their fellow classmates might interfere with -- university officials warned him that he would be in violation of the concealed-carry policy, and that students with the permit would not be forced to comply with his rule. Exempt from the court mandate are dormitories, event centers, and sports facilities. These are areas in which the university does not allow guns; and included under this class of facilities is the Coors Events Center, where the October GOP primary debates will be held.

Bronson Hilliard, assistant vice chancellor for strategic media relations at the university, said that any renter of the facility, including the RNC, would have the ability to opt-out of that policy and to allow concealed carry at their event. However, in this case, the RNC had made no alteration to the contract; thus, concealed carry will not be permitted at the event. So while professors are mandated to work in an environment that allows concealed weapons, the politicians who have advocated these policies will be debating in a gun-free zone.

The gun-free security provided to Republican candidates at these events stands in stark contrast to the specter under which many other Americans live and work. The story of feminist video game critic Anita Sarkeesian is illustrative. Last year, Sarkeesian was invited to speak at Utah State University, Logan. However, with the emergence of the Gamergate movement, her outspoken criticism of racism and sexism in the video game industry made her the subject of ongoing harassment, including threats of rape and murder. A death threat against Sarkeesian was sent to the university, demanding the cancellation of the talk. “This will be the deadliest school shooting in American history, and I’m giving you a chance to stop it.”

The threat was sent under the pseudonym Marc Lepine, a man who shot 14 women then himself in Montreal in 1989. Sarkeesian had followed through with previous talks despite death threats; however, Utah State University informed her that, because of a state law permitting concealed firearms on campus, they would have no way to prevent someone from bringing a gun to her talk. So, again, while public figures like Sarkeesian must deal with the dangerous reality of concealed carry, Republican candidates will be safely debating in gun-free zones, while advocating policies quite different from that.

The GOP’s December debate will be held in Las Vegas, but the party has not yet announced the venue for the event. Nevada has some of the most permissive gun laws in the country, and the Las Vegas Convention Center, the city’s largest venue, permits concealed carry on the premises. But will the GOP be willing to risk the safety of its candidates by choosing a venue that allows audience members to bring concealed weapons? Or is that just a policy they advocate for the rest of us?

Mike Burton assisted in the research for this piece.