The insidious violence of #AllLivesMatter

As the defacement of a Sandra Bland mural reminds us, the hashtag is little more than racism disguised as inclusion 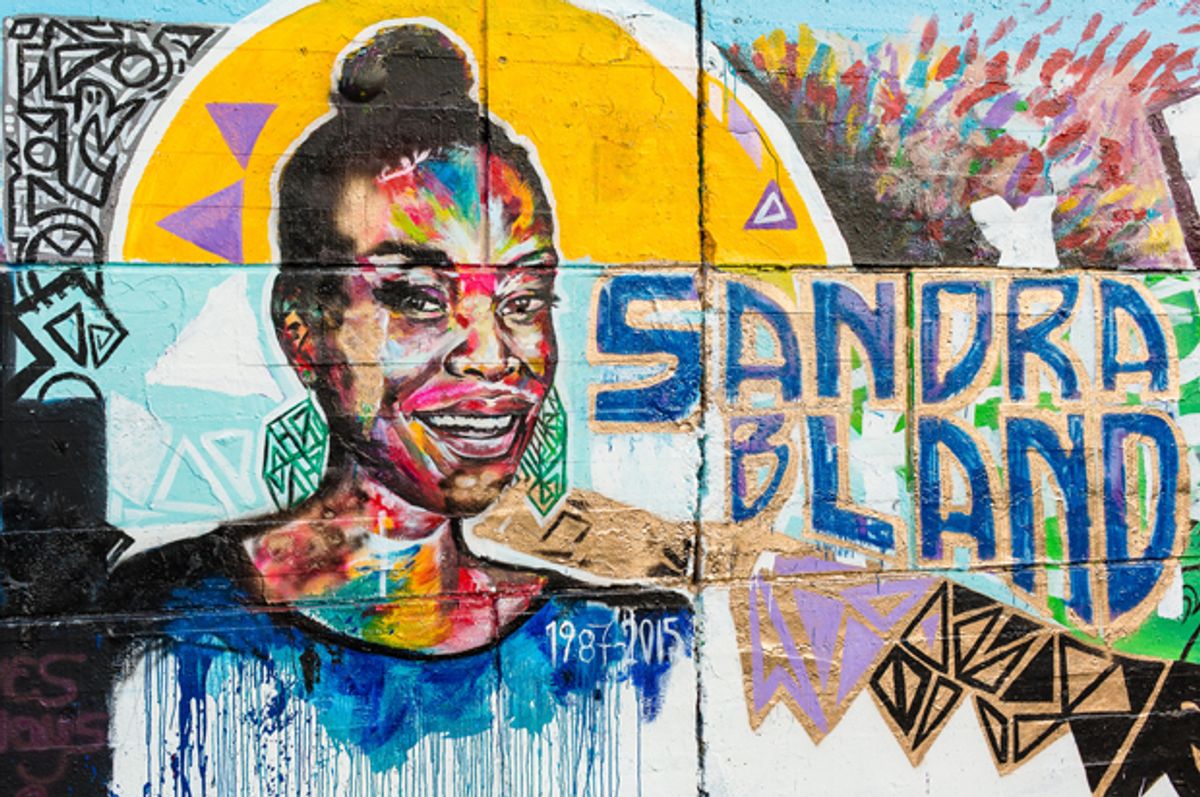 In the social media battleground over race and policing, the debate seems to be a matter of two warring hashtags: #BlackLivesMatter and #AllLivesMatter. Recently, another symbolic manifestation of that war—aside from police brutality and killing of unarmed black people—happened in living color, on a brick wall in Ottawa, Canada.

A mural of the late activist Sandra Bland, a woman deeply inspired by the Black Lives Matter movement, was defaced just one day after it was erected. The vandals tagged “All Lives Matter” over Bland’s name, and scribbled racial slurs over her face, outraging many supporters of the #BlackLivesMatter movement—and forcing the community to unite for a restoration effort.

More from The Daily Dot: "'Deadpool' finally gets an official teaser -- just not the one you'd expect"

The mural, created in Bland's honor, is quite the work of art. Memorializing her in bright, vivid color, the painting portrays Bland smiling, adorned with geometric earrings and a cobalt blue shirt. Her hair: black and in a high bun. And Bland’s peaceful gaze—set to the backdrop of a bright yellow sun—sits alongside her full name, the years she lived, and other abstract designs in the background. And, notably, her skin is painted in a rainbow of hues, a choice that emphasizes her bright personality—one which shines through in her online videos.

Yet this beautiful mural and memorial, which didn't explicitly name the Black Lives Matter movement, was defaced in an attempt to crush the spirits of a community fighting for racial justice. Not only did the work of the vandals reflect their own overt racism, it also shows that “All Lives Matter” isn't about a call for more unity and inclusivity. Instead, as the mural defacing demonstrates, #AllLivesMatter was created to silence voices that proclaim the importance of black lives.

A hashtag like #AllLivesMatter may very well reduce any discomfort that many non-black and white people feel when they discuss matters of racism. And contrary to popular opinion, racism as we know it did not die with desegregation and the peak of the Civil Rights Movement. It's still alive and well, as indicated by the deaths of unarmed black women like Bland, Tanesha Anderson, Miriam Carey, and many others whose names have become hashtags all their own. This reality informed the creation of #BlackLivesMatter by three black women organizers, at the peak of national attention on Trayvon Martin's murder.

As the mural defacing demonstrates, #AllLivesMatter was created to silence voices that proclaim the importance of black lives.

The steady drumbeat of unarmed black people getting killed by police officers and vigilantes—along with the legal system's failure to hold killers accountable—shows that all lives don't truly matter, even though they should. Unfortunately, many people who insist on using “All Lives Matter” don't take the time to learn the ways in which black people remain disenfranchised. As I've previously noted, when people use #BlackLivesMatter, they're saying “black lives matter too,” not “black lives matter more.” The hashtag is a declaration that signals the need for others to care about how our country treats black people, especially law enforcement.

More from The Daily Dot: "Lenny Kravitz's guitar solo was so sick his d*** ripped through his pants"

Whereas #BlackLivesMatter is at the crux of what's one of the largest social movements of our time, #AllLivesMatter is a hypocritical at the very least, and offensive at most. Even outside of the context of black lives, #AllLivesMatter also sweeps other issues of oppression under the rug—all for a façade of inclusion. For example, even as black people are disproportionately jailed and shot by the police, Muslims and Middle Eastern-looking people are racially profiled while flying, and LGBT people continue being attacked because of who they are.

It takes nothing away from anyone else, or their life's struggles, to affirm the importance of black lives. But that's what people who use #AllLivesMatter seem to believe. They're wrong.

Those who use #AllLivesMatter may not realize the hashtag actually didn't exist before #BlackLivesMatter. It only sprouted as a pushback against the online uprising of black people. According to Google Trends, online use of #AllLivesMatter exploded around the time that Ferguson police officer Darren Wilson wasn't indicted in the shooting death of Michael Brown. Well before that announcement, #BlackLivesMatter was both an active hashtag, and a rallying cry for protesters. We can't say the same for #AllLivesMatter—because it's not a movement in itself, ibut an attempt to wipe out a movement.

Rather than amplify the concerns of all oppressed people, #AllLivesMatter works to silence the outcry of black people and drown out their voices as they rally for justice. In the process, it doesn’t affirm the struggles of black people, but renders their pain invisible and unimportant. It’s the message not only sent when politicians and Twitter users deploy #AllLivesMatter messages, it’s also the message sent symbolically by the vandals who defaced the Sandra Bland mural.

The resistance to a fully-voiced support of black lives speaks to how American society indeed doesn't believe that black lives matter. Those who benefit from racial oppression may not understand why it's important to participate in the conversation, examine their own power and privilege, and support organizers' push for change. By pushing back with #AllLivesMatter, that important process to reconciliation and justice gets swept aside. And with the stroke of a paintbrush, and the flick of a spray can, vandals unwittingly gave us a visual representation of what that damaging erasure looks like.

More from The Daily Dot: "Marijuana soon to be delivered by drones"

Defacing Sandra Bland's mural briefly stole a moment of clarity about a black liberation movement, all while disrespecting a black woman who died in police custody. That disrespect to a life, a black life, contradicts the would-be message of #AllLivesMatter, and underscores why #BlackLivesMatter must still exist.