"Two million dead on the side of the patriots": How Alex Jones's "Jade Helm" conspiracy theory got very dangerous very fast

Jones has been raving about a military "takeover" for months. And two shootings this week show the influence he has 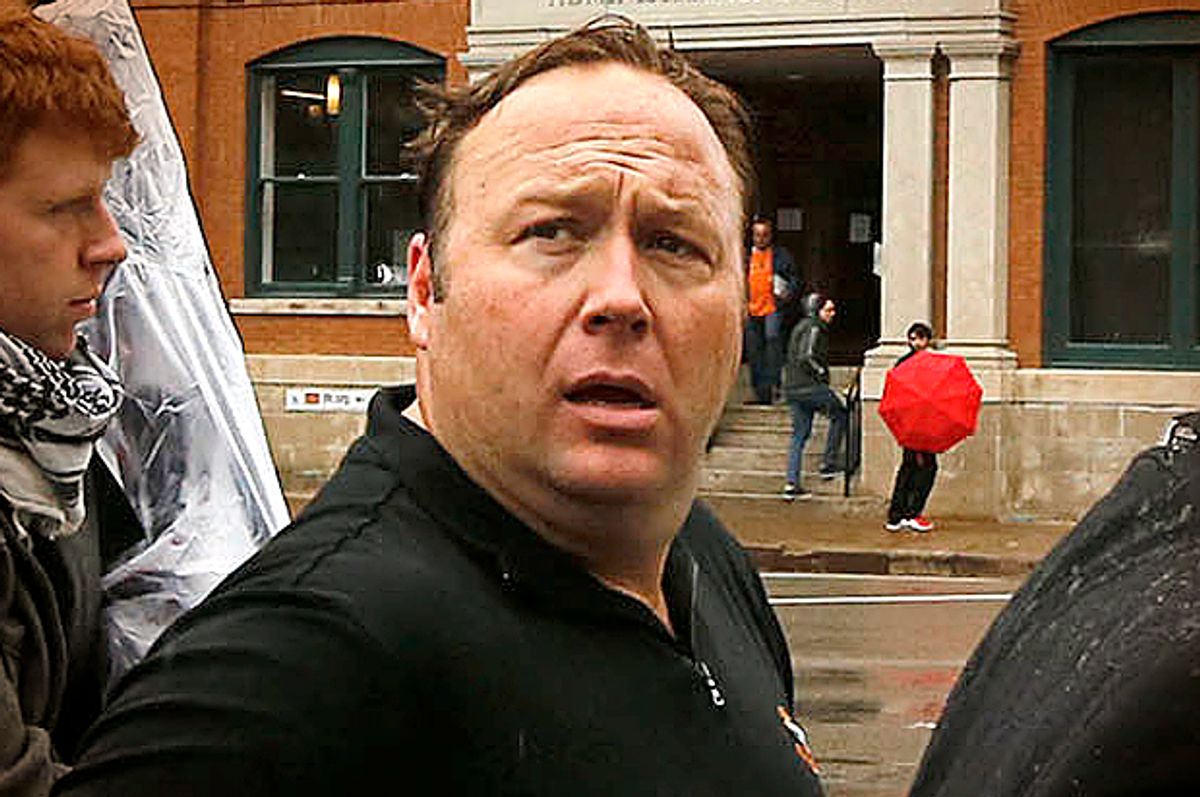 Not too long ago, Alex Jones attacked me and Salon because we referred to him on several occasions as a dangerous liar. And it's becoming more and more clear just how dangerous he is.

While there's no demonstrable causal relationship between Alex Jones and domestic extremism (and I'm not suggesting there is), it's not difficult to see how Jones, with his massive online and broadcast audiences, has contributed to an environment of anti-government tension -- bordering on hysteria, frankly -- via his proverbial conga line of wacky conspiracy theories.

In addition to screeching about weather weapons, gay-inducing juice boxes, shapeshifting lizard people from outer space and the global conspiracy to poison us with so-called "chemtrails," Jones is patient zero for the pervasive Jade Helm 15 conspiracy theory, in which Jones and his disciples speculate that routine military exercises are either a direct effort to seize large parts of the South, or that the operation is a plot to soften the public to the idea of a military occupation sometime in the near future.

Knowing this, it's really no wonder why for the second day in a row, shots were fired at a military encampment participating in the Jade Helm exercises yesterday.

In the first incident, on Tuesday, shots rang out near a checkpoint along the eastern flank of Camp Shelby Joint Forces Training Center in Hattiesburg, Mississippi, were 4,600 soldiers composed of both active-duty troops, reservists and National Guardsmen are stationed for the exercises.

Then, Wednesday morning, in the same general vicinity more shots were fired. The Mississippi Bureau of Investigation tracked down a red Ford pick-up truck, reportedly used by a white male shooter in both instances. The owner of the truck is currently being questioned at an undisclosed location. (Cue another Alex Jones conspiracy theory about how the suspect is being disappeared or rendered to a black site, or whatever the hell Jones might come up with.)

The good news is there weren't any injuries, and due to Mississippi Governor Phil Bryant's order to arm all base guards, the facility is reportedly well secured.

But the overall threat remains. And let's not mince words here: It's a domestic terror threat based partly on an atmosphere of raging paranoia, fear and militarism marketed by Alex Jones and his InfoWars goon squad. So powerful is Jones' twisted reach that the governor of Texas, several months ago, ordered the state guard to monitor the Jade Helm exercises, as an obvious reaction to the public outrage fomented by Jones. Combined with Jones' daily nonsense about Jade Helm, Governor Greg Abbott's actions offered a patina of legitimacy to the theory, further entrenching the anti-military paranoia of the InfoWars universe.

Couple the Jade Helm theory with another Jones theory about a forthcoming civil war, and it's no wonder why angry white guys with firearms are freaking out. Just over a year ago, Jones said on his show:

“[The government] needs the police and the military to wipe out the liberty movement, and we wipe them out. [...] I estimate in the civil war, 300,000 police will die. I estimate that if the military marches out against the gun owners, half a million dead. Two million dead on the side of the patriots. Won’t matter, we’ll have another 10 million where that came from. But it’ll be a real war once they start it.”

Therein lay the seeds of his Jade Helm theory. It's all about the military and the police provoking the "liberty movement" into a shooting war. And now, a year later, shots are actually being fired. What Jones doesn’t seem to realize (or maybe he does) is that this kind of rhetoric speaks directly to the itchy-trigger-fingered militiamen and self-styled revolutionary cosplayers who believe that, yes, the government is going to attack them and seize their weapons, so they should be ready to counterattack. And this is evidently defined as "patriotic."

When it comes to this kind of domestic extremism as well as the rhetoric that sparks it, Jones ought to take ownership of his recklessness and his fear-mongering. After all, aren't conservatives all about "personal responsibility?"

But he definitely won't do that.

To wit, as of this writing, the InfoWars website is framing the shooting as false flags. The headline: "MARINES FIRED ON NEAR JADE HELM TRAINING SITE. Training exercise gone awry? Or as planned?" As planned? It's the predictable Jones game: to suggest that every shooting is really just the government staging the event so writers like me will blame the "patriots" and the Democrats will seize the guns. He's clever that way, but any rational, thinking observer can see exactly what he's doing.