The greatest sh*t-show on Earth: The 2015 Republican presidential debates

Brace yourselves, America. If you thought 2012's GOP debates were nuts, just wait until Donald Trump's on the stage 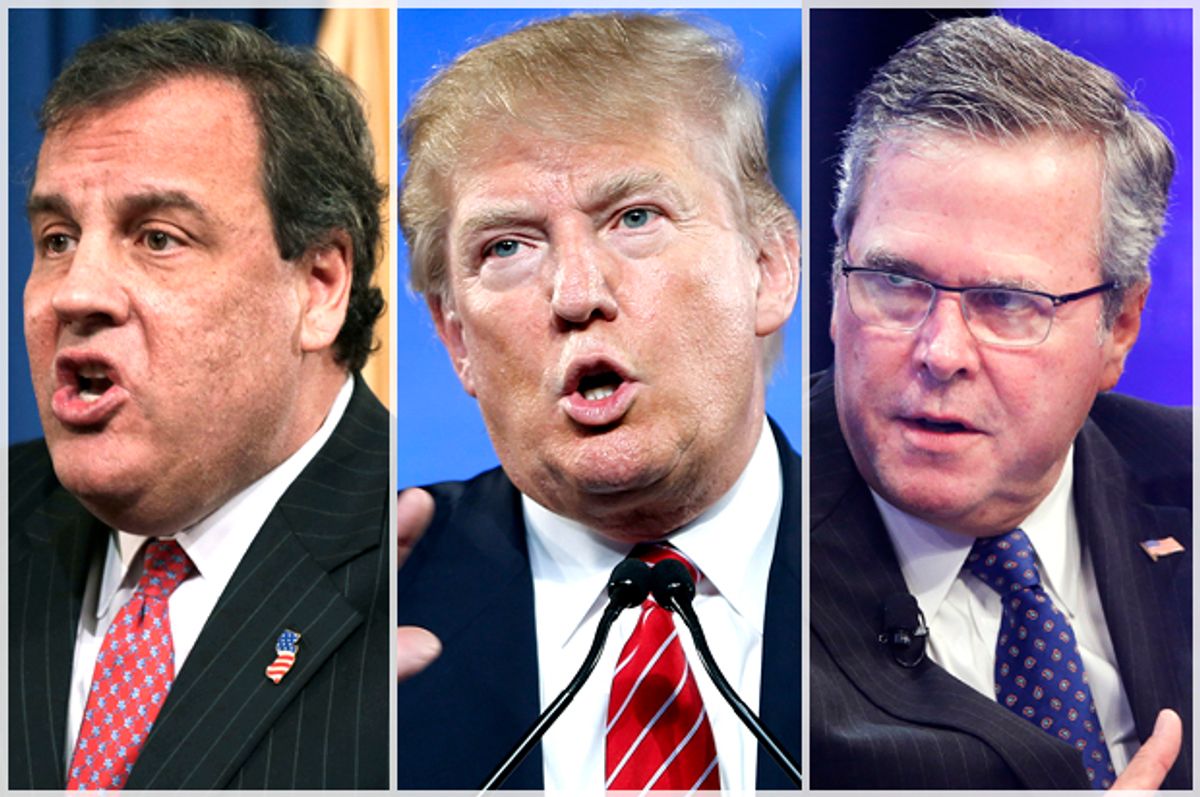 A few weeks ago, I found myself rather uncharacteristically stumped about American politics. Now, I'm not bragging when I say that I am normally very on top of the latest political happenings—it's more like a congenital defect, something that will get me chucked off to a special island someday—but there we are. Anyway, I was talking to someone about the 2016 GOP primary and realized that I'd completely lost track of who was actually in the 2016 GOP primary. I got to about Ted Cruz or so, and then it was just a bunch of heads with question marks swirling in the gloom.

All of this is to say that I am grateful for tonight's Republican presidential debate, because it will, at the very least, help me and all of us to remember the identities of the people who are currently smushed unceremoniously into this conservative clown car. Step right up, Chris Christie! Pull up a podium, Rand Paul! Hey, Ben Carson, uh, nice standing? (Sorry, ran out of steam a bit there.)

And, let's be honest—for most of the people involved in tonight's proceedings, making voters aware of their existence is the top priority. Despite the spate of articles declaring John Kasich "one to watch," for instance, it's a solid bet that the vast majority of Republican voters, if they've even heard of him, have him down on their list as "governor of Ohio/confirmed human/???" Kasich just barely squeaked into the prime-time, big kids' debate, and he now has his best opportunity yet to carve out a sliver of space in people's consciousness.

He's not the only one. Chris Christie has probably spent the last five weeks rehearsing his boorish zingers so that he can make people forget that he's a totally spent political force. Jeb Bush and Scott Walker will likely take up a fair amount of time acting like they don't deserve to be breathing the same air as the other guys around them. Marco Rubio will be holding up a sign that reads "Young Person."

They're all like rats in a sack desperately trying to crawl their way up to the light. And they all have the exact same problem: Their path is being blocked by an especially large and truculent rat named Donald Trump.

Ah, Donald. The man who is the current sun around which the entire GOP campaign appears to revolve. The man who has everyone donning their best nun costumes and quoting from "The Sound of Music." The man who, in some cases, is getting more media coverage than all of his rivals put together. The man who has single-handedly torpedoed the Republican National Committee's efforts to avoid a repeat of the utter insane asylum that was the 2012 Republican debates.

That's right: This was supposed to be the election cycle when the Republican elites took back control of the debate process. The last time around, you will recall, there were 20 debates, and they were absolutely bonkers. "Raucous Crowds Boo Contraception, Cheer Death Penalty" is how one headline summed them up. After that debacle, the RNC solemnly vowed to set things right. The madness would end!

Well, so much for that. Donald Trump has cheerfully run a battering ram through the best-laid plans of Reince Priebus. Forget Jeb Bush's attempts to project sober-minded good governance. Nobody cares. Every thought, every question inevitably circles back to Trump.

There is, of course, the possibility that the debates will be the place where the Trump balloon begins to deflate. You can bet that's what the entire Republican establishment is praying for—that Trump will make some Rick Perry-level mistake and be swiftly forgotten, allowing the other candidates to reclaim their spot at the center of the campaign. We shall see. Everyone will be waiting to find out how the other people onstage deal with him. They will all be trying to take him down. He could say literally the craziest things in response. It will make for excellent television.

There are two other things to watch for. The first is whether, putting Trump aside for a minute, Republicans have moved in any substantial direction away from the hard-right policy mess that they made in 2012. So far, there's not much evidence of that, but this is the first sustained chance we have to see just how thoroughly the primary process may damage any (non-Trump) candidates.

The second thing to watch for is how the Fox News moderators—Chris Wallace, Megyn Kelly and Bret Baier—conduct themselves. Anyone expecting some sort of lovefest from these three is mistaken. Fox News may be a conservative outlet, but it takes its role in the GOP primary process very seriously. "Rupert [Murdoch] is going to need me to elect the next president," the network's Roger Ailes has reportedly said. He's not kidding.

Murdoch has already slapped Trump down publicly, though there are signs that the two have made peace recently. But Fox News has a big choice to make about how it handles Trump in the debate. Do the moderators single him out and go for the jugular? Do they back off? And how do they approach the rest of the field? Wallace, Kelly and Baier are all—despite how you may feel about their politics—pretty serious journalists, at least by the standards of cable news, and they can be frightfully tough interrogators. (Just ask Mitt Romney.) You can definitely expect their questions to have a right-wing framework, but you can't expect them to go easy. It will be very, very interesting to see what they do.