America is a neoliberal horror movie: Why "They Live" is the perfect film for our depraved times

"Rowdy" Roddy Piper may be gone, but his '80s cult classic about alien overlords has never resonated more strongly 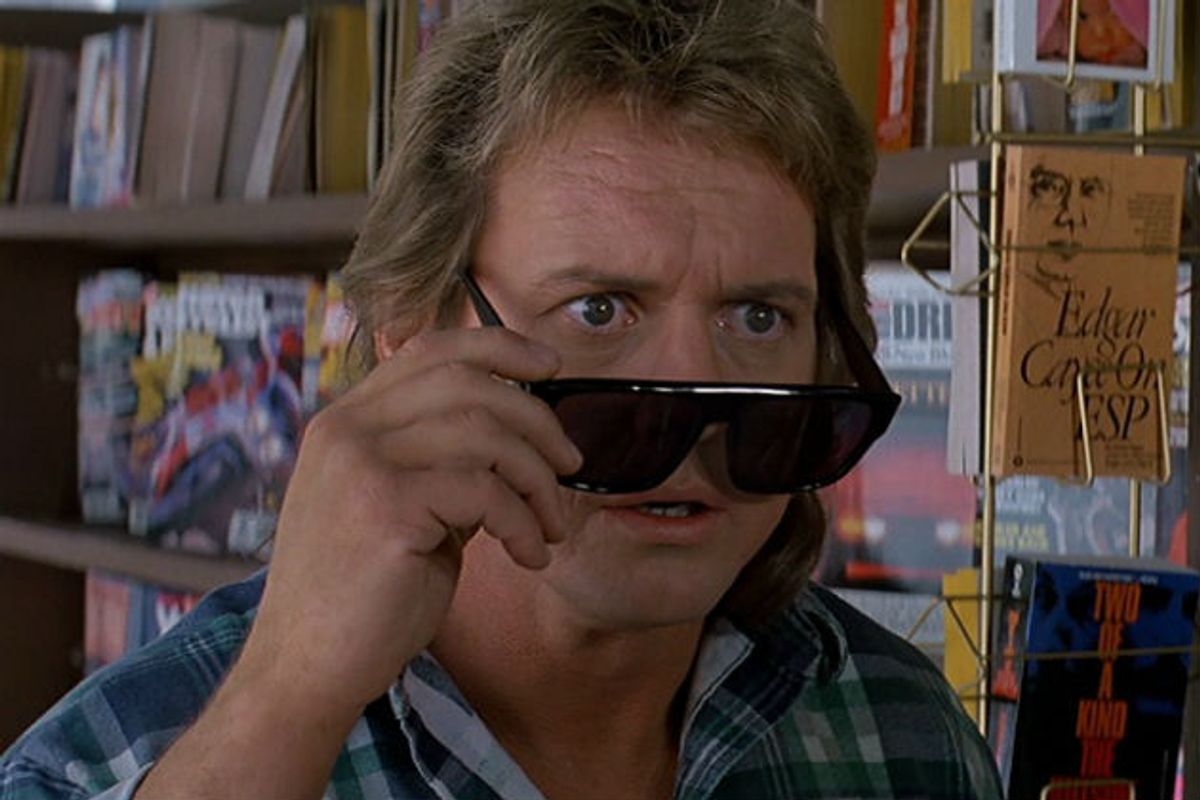 Legendary professional wrestler "Rowdy” Roddy Piper passed away on Friday, July 31 at the age of 61. He succumbed to a heart attack in his Hollywood, Calif. home.

Roddy Piper is best known for his work with the World Wrestling Federation during the 1980s and feuds with Hulk Hogan, Mr. T and Jimmy “Superfly” Snuka. While he is a member of the WWE’s Hall of Fame, I would dare to suggest that in the future it is far more likely that Roddy Piper will be remembered for starring in the 1988 cult classic film They Live,directed by John Carpenter.

The plot of They Live is deceptively simple. Roddy Piper’s character, a semi-homeless day laborer named Nada (Spanish for “nothing”) discovers a pair of sunglasses that allow him to identify the extraterrestrials who have infiltrated the Earth’s populace. The aliens are part of the global (intergalactic) power elite, a group that has been stealing the Earth’s resources, buying off its leaders and exploiting the masses for their own personal gain. Piper’s character quickly encounters Frank (played by actor Keith David), and together they join the resistance movement in order to bring down the alien overlords.

As I discussed with author Jonathan Lethem several months ago, They Live is a genius film that embraces the culture of disreputability—it is genre entertainment, based on an obscure short story, a professional wrestler is the main character, and the heroes of the movie are an interracial group of homeless, working-class and poor people. For all its B-movie auteur sensibilities, the film is a scathing indictment of the Reagan era, the culture of cruelty and austerity, wealth inequality, plutocrats, corporate media, classism, racism, and greed.

They Live is also an essential film for the current socio-political moment; it has much to teach the American people as they struggle to make sense of wanton police brutality against people of color and the poor in the new Gilded Age, an era of toxic white masculinity, and perverse reactionary right-wing politics.

How people can learn to see reality more clearly

The nature of the truth and its relationship to reality are foundational philosophical concerns from Plato’s classic allegory of the cave through to the immensely popular Matrix films. When Roddy Piper dons his sunglasses he sees an unsettling and terrifying world—one which he initially runs from, in shock and denial. At first, Piper believes he must be insane because the brutal reality of hegemonic power is now laid bare in front of him, with its organs of control through the media, surveillance, advertising, casino capitalism, the corporation, and the police state.

They Live presents one of the fundamental choices citizens must make in this time of neoliberal trouble and tumult: does one choose to live in denial or does one accept the truth?

An indictment of learned helplessness

The neoliberal order through a combination of surveillance, economic brutality, incarceration, and technologies of pleasure and distraction (for example: social media, mass entertainment, consumerism) has been able to limit the possibilities of true democratic action and reform. The American people (and many in the West) have seen true democracy undermined by organized and well-monied interest groups, the rich, and corporate power that pursue policy goals which are antithetical to the will of the people.

The American people know something is amiss and wrong, but many of them are too tired, afraid or distracted to do anything about it. Unfortunately, too many Americans are living a life oriented around survival and pleasure; a life that is neither fulfilling nor transformative.

They Live demonstrates how a group of marginalized people who are written out of the polity can struggle for and win a more humane and just world. These heroes made a choice to overcome learned helpless and become citizens of action.

Interracial alliances across lines of class can change the world for the better. The invention of whiteness in the 17th century is one of the primary means through which white supremacy has come to dominate global society. White supremacy as a system of maintaining unearned advantages for “white” people has historically paid significant material, psychological, political, and economic wages to its owners and other beneficiaries.

But in an age of globalization and gross wealth inequality the central lie of whiteness is further exposed: whiteness has always benefitted white elites at the expense of the material (and often long-term political) interests of the vast majority of white people. In many ways, poor and working-class white people have more in common with poor and working-class people of color than they do rich and upper-class whites. White racial resentment and the intoxicating effects of white supremacy have blinded too many white folks to that reality.

They Live intervenes against the possessive investment in whiteness: the plutocrats, the elites, and the "aliens” are the real enemy that human beings, in service to our shared humanity and the common good, should be fighting. They Live reminds us that there are human beings with no sense of linked fate, compassion or caring for other people. They are engaged in a cruel type of calculus that results in a distorted and wicked biopolitics that uses the "market” to decide human worth: this is homo economicus as sociopathy.

The human traitors in They Live are agents of neoliberal governmentality, where profits trump human dignity and value, who seek to destroy the social safety net, eliminate the “useless eaters,” believe that corporations are people, and live an ethos of robber baron gangster capitalism. The aliens may rule the Earth, but they are only able to do so because they are helped by unethical and immoral human beings.

At the climax of They Live, Nada and Frank embark on a suicide mission to destroy the satellite dish on the roof of a local news station that is broadcasting the signal that keeps the Earth’s people asleep, helpless, enslaved, and enthralled to the alien’s will. In this symbolically potent moment, two poor men, one white and one black, die to awaken humanity to the dynamic of their true oppression.

They Live ends with the ghouls from outer space, their glamour and masks dropped, as the people see them for what they actually are, monsters who are our business leaders, lovers, bosses, media elites, politicians, and dream merchants.

In the present, They Live reflects an America (and world) where some people have put on the glasses, awakened to the ugly reality of the culture of cruelty, austerity and disposability, and decided to resist it. They are the young lions in Baltimore, Ferguson and the Black Lives Matter movement; the people who have fought the IMF and World Bank in places like Greece; the Occupy Wall Street and Jubilee movements; the Greenpeace protesters suspending themselves from a Portland bridge to stop the ravaging of the Earth by oil companies; and the Boycott, Divestment and Sanctions movement.

Ultimately, They Live is also a metaphor for how the “aliens” still dominate American politics and life.

This week, the Republican Party will hold the first televised debate to decide which of its candidates will be the presidential nominee in 2016. These debates will feature personalities from an irresponsible political party that has mated racism and conservatism in order to advance a radical agenda which will further destroy the consensus politics that has governed the United States since at least the middle of the 20th century.

The Republican debates are a spectacle and a parade of political ghouls. In the recent past, Republican debates have featured audiences that cheer killing people, electrocuting Hispanic and Latino immigrants, and who boo gay Americans. The 2016 candidates choose to pander to the freak show human zoo that is the Republican base in order to win their approval and subsequent nomination.

Consequently, the potential Republican presidential candidates include people who believe that God has appeared to them and sent magical portends that they should run for president of the United States. They want to destroy the gains of the Civil Rights movement, deny basic scientific facts such as global warming, and yearn to invade and bomb countries around the world. They are birthers, Islamophobes and plutocrats who see the American people as lazy. And of course as a group the Republican presidential nominees want to further destroy the basic guarantees of an already threadbare and frazzled social safety net.

This is the politics of spectacle, illusion, distraction, and absurdity They Live cautioned its viewers about.

In They Live, upon donning his sunglasses and seeing the truth, Roddy Piper decided to kick ass and chew bubble gum…and he was all out of bubble gum. This was a call to action in a smart B-movie that embraced the culture of disreputability in order to tell some basic truths about power, greed and politics in the neoliberal age.

John Carpenter’s They Live was prescient. Roddy Piper was irreplaceable both in the squared circle of the professional wrestling ring and as a man named Nada who reminded us all that we can choose to see reality more clearly, and then fight to make the world a better place.