Bland talking points, missed opportunities, and Donald Trump: What we learned from the first GOP debate

The 2016 Republicans put on a dull, substance-free debate performance and Donald Trump made a Rosie O'Donnell joke 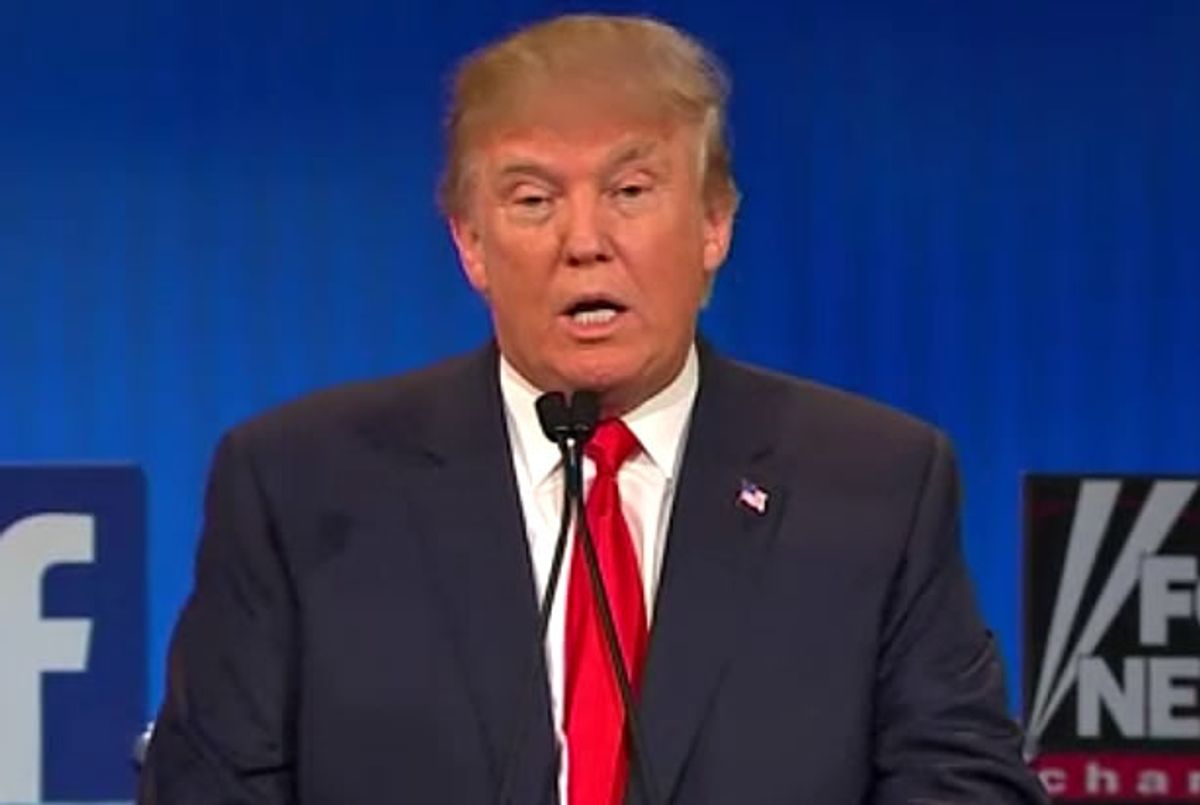 The first real debate* of the 2016 election cycle is over, and thank Christ, because every second of it was a punishing slog that corroded the soul like so much battery acid. The event was egregiously overhyped, given that we’re still several months from anyone casting an actual vote and the high likelihood that one or more of the candidates on stage won’t even make it to the Iowa caucuses. But I suppose that overhyping was inevitable considering Donald Trump’s inspiring ascent to the top of the Republican presidential field.

Speaking of Trump, he performed precisely as you would have expected him to. Right out of the gate, the candidates were asked if they would pledge to support whoever the GOP nominee is should they lose, and Trump was the only person not to make that promise. He didn’t really have a coherent reason why, though Trump did say that "if I’m the [Republican] nominee, I will pledge I will not run as an independent." You might be inclined to ask why he would run as an independent if he won the GOP nomination, but that would be a criminally inappropriate application of sound logic.

Asked by Fox News’ Megyn Kelly about the many awful things he’s said, tweeted, and barked at women over the years, Trump won a few points with the crowd by making a Rosie O’Donnell joke (never change, Republican voters). Then he surrendered those points back by suggesting to Kelly that she should be grateful he doesn’t go after her for how she’s treated him. Trump didn’t reach peak absurdity, however, until he was made to defend his many donations to prominent Democrats over the years. “When they call, I give,” Trump explained. “And you know what, when I need something from them, two years later, three years later, I call them, they are there for me and that's a broken system.” So the system is irretrievably corrupt, and as proof of this corruption, Trump offered himself.

But enough about him. There were nine other people on that stage who actually stand a theoretical chance of becoming the Republican nominee, and they had an opportunity to make a big splash on the national stage. And nearly all of them blew it. Jeb Bush is an awkward weirdo who clearly does not do well in debate-like situations. He’s perfectly competent at reciting stats and figures about Florida’s economic growth during his time as governor (he conveniently leaves out the major assist he got from the state’s housing bubble, which popped and sent Florida spiraling into recession after he left office). But he stumbled through an answer about Iraq (again), and when asked how he’d make good on his promise of sustained four-percent economic growth, he said the key was to “lift our spirits and have high, lofty expectations” (along with the usual pabulum of gutting regulations and repealing Obamacare).

Scott Walker seemed like he was easing into or out of a coma, and managed to sound dull even when dodging a question about whether his extreme anti-abortion views would mean he’d “let a mother die rather than have an abortion.” Marco Rubio did his thing where he talks about how he’s the man for the future, though he wasn’t afforded any opportunities to indulge in his main area of expertise: agitating for more foreign military intervention. Rand Paul got into a shouting match with Chris Christie over civil liberties and got the better of the New Jersey governor, who had to pull the 9/11 rip cord to try and save face. Ben Carson talked about tithing and Saul Alinsky, while Mike Huckabee – who recently said Obama’s Iran deal was the equivalent of the Holocaust – attacked Obama for “vilifying” his critics on Iran. Ted Cruz was given little chance to speak and went largely unrecognized, which is absolutely how it should have been.

Aside from the Trump theatrics, it was largely the sort of dull, substance-free affair the Republican National Committee had been hoping for. There were no big fights over immigration policy, even though Jeb’s and Walker’s apostasies on “amnesty” came up in questioning. I’m struggling to think of an instance in which a bottom-tier candidate made a serious attempt to punch up at one of the non-Trump frontrunners. They generally just stuck to their talking points and canned anecdotes about their hardscrabble, working-class roots. It was awful.

But I guess being a pundit obligates me to pick a “winner” for the debate. If forced to choose, I’d say Ohio Gov. John Kasich. He was no more specific on policy than the others and he went through the scummy motions of praising Trump (he “hit a nerve” on immigration, per Kasich) so that he can reap the benefits of The Donald’s inevitable flameout. But he was fortunate just to be on the stage, having made the cut at the last minute, and was also the only one of the assembled goons who actually seemed to enjoy himself.

*The low-rated also-rans who didn’t poll well enough to make it to the main event had their own pity debate earlier in the evening.