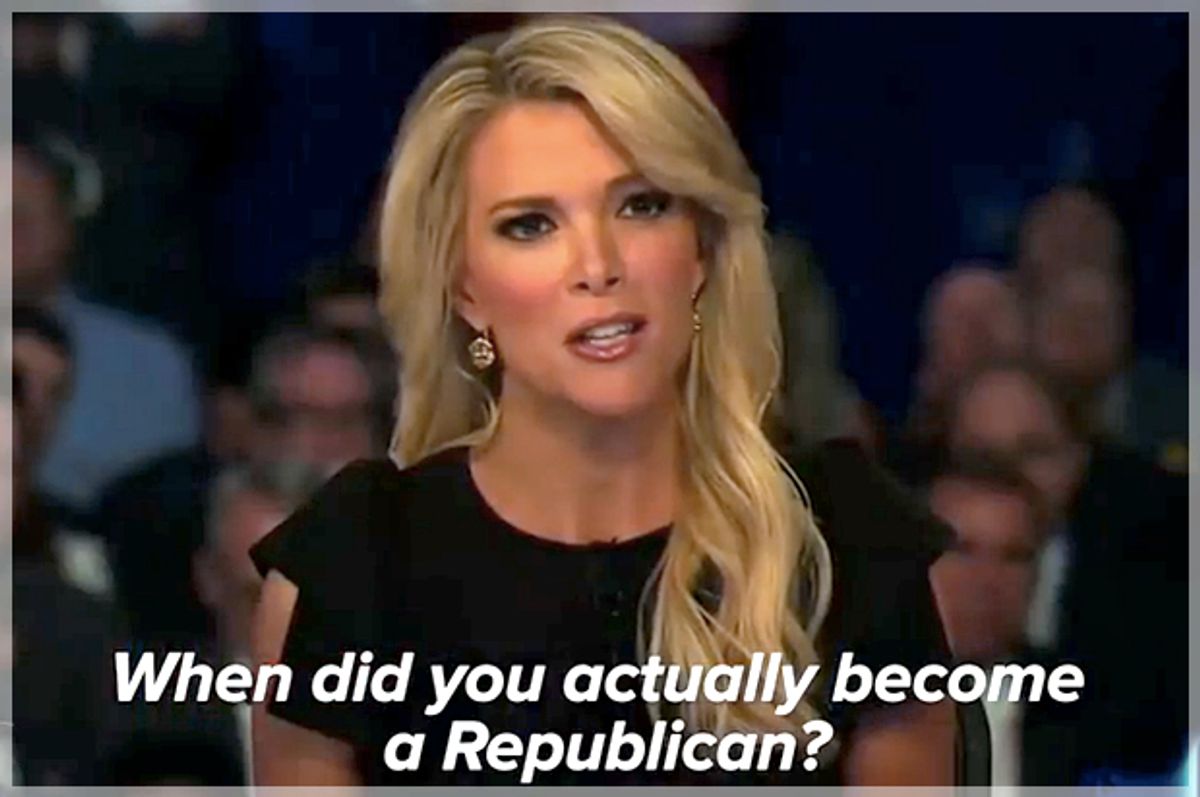 Donald Trump may, in most respects, be a pestilential blight on our world, but there is one undeniably helpful service that he provides: his Twitter feed. Anyone looking for a real-time bulletin of Trump's insecurities, ill-considered opinions and ever-shifting roster of arch-nemeses need do nothing more than head to @realDonaldTrump.

The best part of the feed is when Trump decides that he has a new enemy who needs to be taken down. He is refreshingly forthright about who has gotten under his skin lately, even though the targets change constantly. So it was easy to figure out who Trump felt had wronged him on Thursday night, when he headlined the first Republican presidential debate of the 2016 campaign.

"Wow, @megynkelly really bombed tonight," he tweeted, later adding, "I really enjoyed the debate tonight even though the @FoxNews trio, especially @megynkelly, was not very good or professional!"

Kelly and her colleagues all went after Trump on Thursday. In fact, the trio was tough on almost all of the prospective candidates in the debate. But it was obvious throughout the proceedings that they saved their choicest pieces of venom for the Donald.

Kelly was especially brutal, confronting Trump about his history of nakedly misogynistic comments towards women. His response was, to say the least, ugly.

And that's exactly what Megyn Kelly and Fox News wanted.

Don't get me wrong: The network is undeniably happy from a television perspective that Trump was part of the debate; he made the whole thing wildly entertaining. Critics will be calling it one of the best comedies of the year. The ratings will be stratospheric.

But, as I wrote yesterday, Fox News is not merely a right-wing circus intent on giving us a fun time. It regards itself as a crucial part of the Republican political ecosystem, as important as any voter in selecting the party's nominees. And Thursday night's debate represented Fox's most concerted effort to date to push Trump as quickly as possible towards the exit doors.

There were many on Twitter who seemed surprised that the moderators were asking such tough questions of the candidates. But they shouldn't have been. Just because Fox News may be soft on Republicans when comparing them to Democrats doesn't mean its journalists will simply roll over for them when it's an intra-family affair. This is the presidency we're talking about. Fox News is not going to do anything by halves. It has its own kind of credibility to maintain; it wants to preserve its place at the top of the conservative food chain and it wants to get the candidates ready for the general election. As Bret Baier put it to the New York Times before the debate, "How are you going to go up against the Clinton machine if you can’t handle us?"

Writers like Jack Shafer and Frank Rich have argued persuasively that many in the media overestimate the network's ability to sway things in the direction it wants, but even if Fox doesn't always succeed, that doesn't mean it won't try, and it was clearly trying when it came to Donald Trump on Thursday night.

You could almost see the gears working during the debate, as if Kelly, Wallace and Baier were setting a bunch of little land mines they hoped would start going off, one by one. Baier opened the show by getting Trump to confess that he would consider running as a third-party candidate if he didn't win the Republican nomination—a blatant signal from Baier to the viewers that Trump was disloyal. And while Kelly's back-and-forth with Trump about women worked against Kelly in the audience -- which loudly cheered his unapologetic embrace of sexism -- you can nonetheless bet that Trumps' statements turned off a large segment of the people watching on TV. The moderators even got Trump to embrace single-payer health care, which he said works wonderfully in Scotland and Canada.

After the debate ended, pollster Frank Luntz convened one of his regular on-air focus groups. Almost everyone in it hated Trump. (Which predictably caused him to blow his top yet again.)

So we know that Fox News is gunning for Donald Trump. What we don't know is whether last night's efforts will work. If Trump begins his decline right now, people will point to Megyn Kelly as the one who slayed him. If not... well, there will be lots more chances to get the job done. In the meantime, the network has once again proven that when it comes to the spectacle of politics, there is nobody that can touch it.