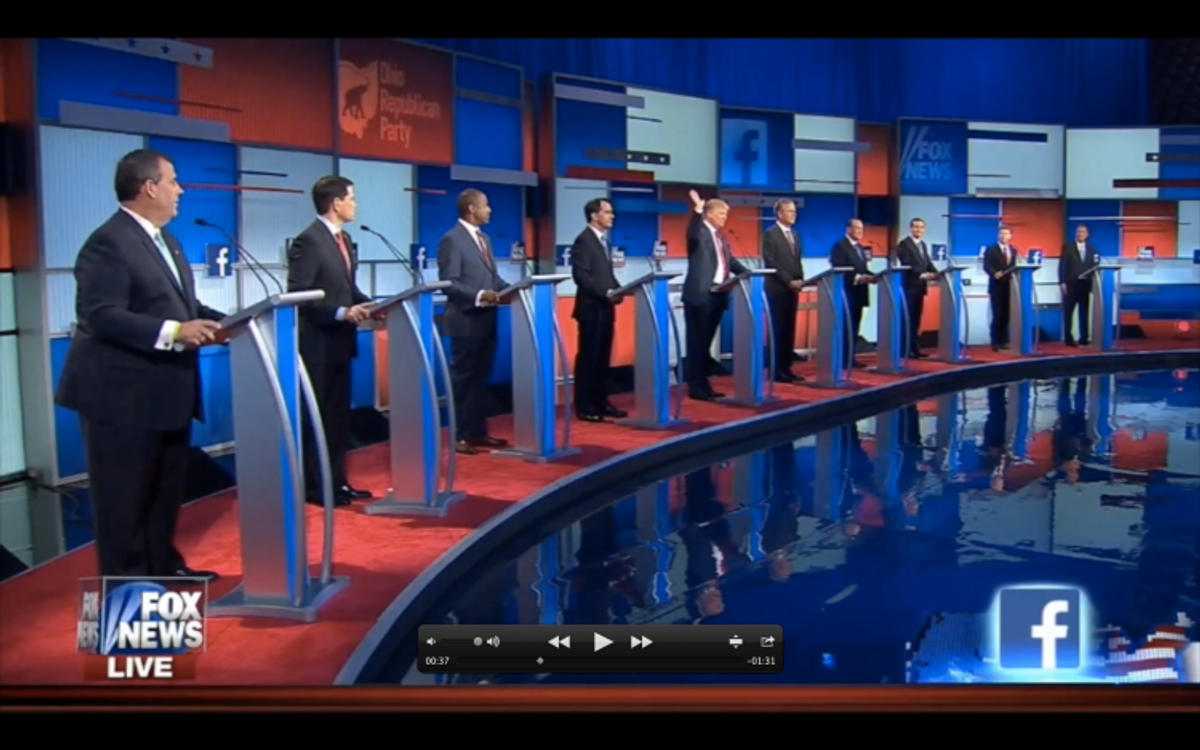 The Fox News hosts of Thursday night’s GOP presidential debate’s worked hard to put Donald Trump back on his heels. At times, it worked – but it’s not clear whether it will matter.

Trump was alternately prickly, crude, menacing and proudly sexist as he took center stage at the first GOP debate. Bret Baier baited him with the very first question, asking the candidates whether they’d promise to support the eventual nominee and forego an independent run. Only Trump refused, and the crowd booed. Trump shrugged. "I will not make the pledge at this time," he demurred.

Megyn Kelly got under Trump’s skin with her first question: about his history of calling women "fat pigs, dogs, slobs, and disgusting animals.” Trump blustered back: “Only Rosie O’Donnell!” But Kelly wouldn’t leave it there, and Trump got nasty: “Honestly Megyn, if you don’t like it, I’m sorry. I’ve been very nice to you although I could probably maybe not be based on the way you have treated me. But I wouldn’t do that.”

Trump occasionally seemed rattled and out of control, but he didn’t melt down. The most potentially damaging segment came when Chris Wallace asked him about his four corporate bankruptcies. Wallace dismissed Trump’s claim that he personally never went bankrupt. “That’s your line,” he needled him.

“I’ve taken advantage of the laws – and so has everyone else in my position,” a visibly irritated Trump insisted. To Wallace’s claim that the corporate bankruptcies hurt his lenders and employees, he delivered one of his best lines: “These lenders aren't babies, Chris, those lenders are total killers!” For a while the crowd seemed fed up with Trump but at that, he got big cheers.

Fox hosts took one for the team, making sure Trump got hit, but that none of the other candidates had to do the damage and risk making Trump an enemy. Only Sen. Rand Paul went after Trump, more than once, earning a mocking reply: “I don’t think you heard me; you’re having a hard time tonight.” The other eight, including Jeb Bush, treated him with deference.

Bush had another bad night; I honestly can’t remember anything he said without looking back at my notes. Post-debate commentary made much of the crowd's rather muted excitement about Bush; more importantly, he once again failed to appear excited about his own candidacy. College debate champ Sen. Ted Cruz was remarkably unimpressive, and retired neurosurgeon Ben Carson looked out of his league in a political setting.

The conventional wisdom is that Sen. Marco Rubio had the best night. It’s true that he came off as poised and possibly leader-like, though all of the love for Rubio expressed on TV and online centered on his presentation, not his policy. Rubio got tripped up on a question about abortion, and seemed to insist the Constitution prohibits abortion in cases of rape and incest.

Wisconsin Gov. Scott Walker shrugged off a question from Kelly about his opposition to abortion even when it’s necessary to save a woman’s life. “Would you really let a mother die rather than have an abortion?” she asked.

“Well I’m pro-life,” Walker said. “I’ve always been pro-life. I’ve got a position that’s consistent with many Americans out there in that I believe that that is an unborn child that’s in need of protection out there. And I’ve said many times that that unborn child can be protected and there are many alternatives that would protect the life of the mother.”

No idea what Walker was talking about there – or on foreign policy either.

I was likewise kind of stumped by Mike Huckabee claiming that a president could use the Fifth and Fourteenth Amendments to stop abortions. I’m not entirely sure how, although Huckabee made clear he supports personhood legislation establishing that life begins at conception. A hint to Huckabee’s real meaning came earlier in the day in Iowa, when he said he wouldn’t rule out using federal troops to prevent abortion.

The meatiest exchange came between New Jersey Gov. Chris Christie and Rand Paul, old sparring partners. Christie was asked about his claim that Paul would bear some blame for a terror attack due to the Kentucky senator's opposition to the NSA’s bulk collection of American phone records. “I want to collect more records from terrorists but less records from innocent Americans,” Paul retorted. Christie, who touted his work as U.S. attorney prosecuting terrorists after 9/11, called that a “completely ridiculous answer. How are you supposed to know?”

“Get a warrant! Get a judge to sign a warrant!” Paul shot back. “I don’t trust [President] Obama with our records. I know you gave him a big hug, and if you want to give him a big hug again, you go right ahead.” Christie pulled a Rudy Giuliani: “You know the hugs that I remember: the hugs that I gave to the people who lost their families on Sept. 11, and those had nothing to do with politics, unlike what you’re doing,”

It’s the kind of exchange that could let both men get new attention, if Trump wasn’t soaking up most of that for now.

Ohio Gov. John Kasich made a play to take the sober, non-hateful establishment Republican baton from the sagging Jeb Bush, defending his decision to expand Medicaid and increase funding for drug treatment. While he reiterated his opposition to marriage equality, he took a conciliatory tone.

“Look, I’m an old-fashioned person here and I happen to believe in traditional marriage. But I’ve also said that the court has ruled … and I said we’ll accept it,” Kasich said. “And guess what? I just went to a wedding of a friend of mine who happens to be gay. Because somebody doesn’t think the way I do doesn’t mean that I can’t care about them or I can’t love them. So if one of my daughters happened to be that, of course I would love them and I would accept them.”

As Luke Brinker noted, the crowd actually cheered (although Kasich had the home field advantage in Cleveland). But it’s not clear that there’s much of a constituency in the GOP for even rhetorical moderation.

Few people will still be griping that Fox’s debate rules might have deprived the GOP of exposure to better candidates. With basic competence, an apparently rare knack for coherence and a prepared attack on Hillary Clinton as a liar, Carly Fiorina dominated the earlier debate of the seven candidates who didn’t qualify for the grownups’ table. Lindsey Graham, who’s normally glib and confident on TV, looked tired, over-rehearsed and kind of sad; I’ve suggested Rick Perry is a better campaigner this time around; this debate proved me wrong. Jim Gilmore played the role of Admiral Stockdale.

Fox may have helped the field in the end, even with its Trump problem. While he criticized the Fox hosts after the debate -- "Megyn behaved very badly," he told reporters -- he had kind words for his GOP primary opponents. “They really are quality people,” he said. Short of Trump’s being shamed out of the race, that’s progress for Republicans, for now.