Jon Stewart's epic "Daily Show" correspondent send-off: Colbert, Carell and Helms stopped in — and even Wyatt Cenac came by to make up

Well, Cenac was across the street, but still! 16 years of "The Daily Show" talent on display 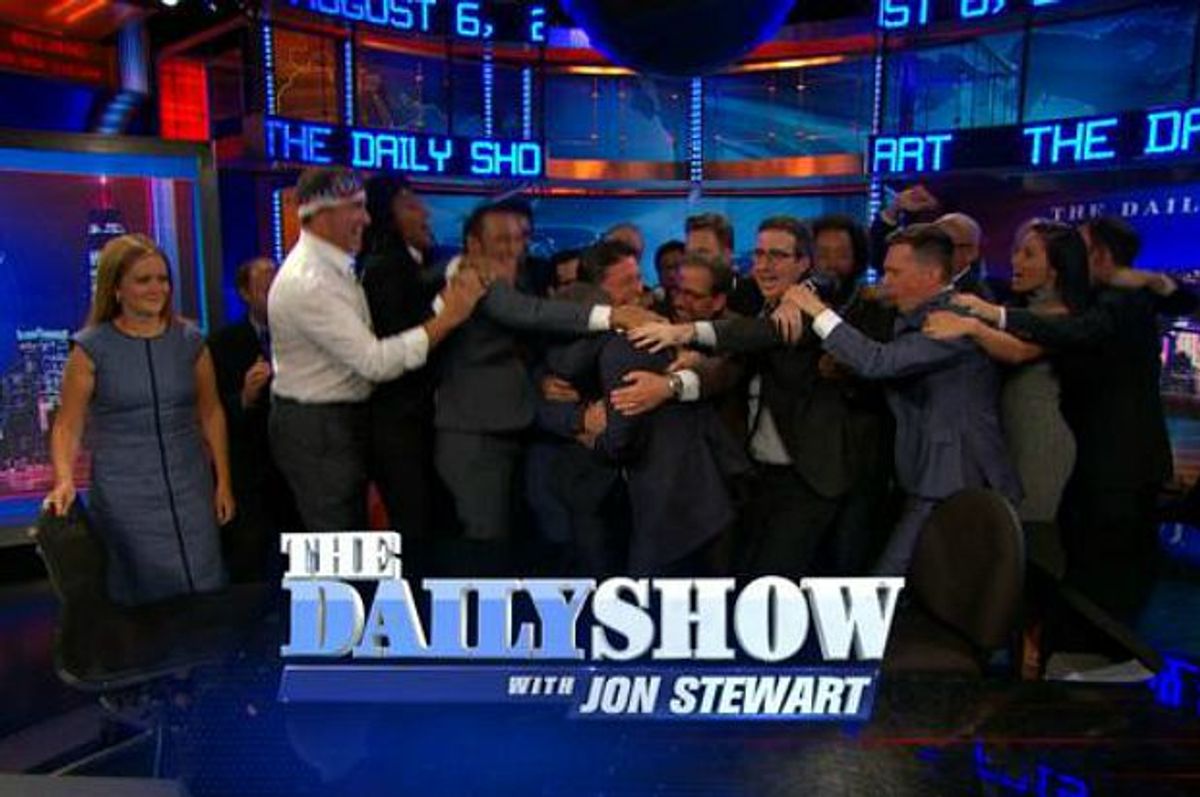 The first half of "The Daily Show" featured a rolling parade of "Daily Show" alumni, including Samantha Bee, Larry Wilmore ("I got nothing else to do tonight, 'The Nightly Show' got bumped — Black shows matter, Jon."), Mo Rocca, John Oliver, Olivia Munn, even Josh "Olaf" Gad let loose a little "Frozen" riff.

Even Wyatt Cenac, who made headlines recently for spilling the the details of his time on staff as the only writer of color in the room, including the time Stewart told him to "f*ck off" after Cenac challenged him on a racially-charged Herman Cain segment, appeared. Theirs was an awkward reunion, but well done: Cenac piped in from a remote shot "across the street," Stewart extended the olive branch, asking him to come over.

Cenac: Maybe. I'm thinking about it. I got some balls in the air.

Stewart: Are you good?

Cenac: I’ll think about it. My social media’s blowing up.

Chris Christie, Bill O'Reilly, Lindsey Graham, Chuck Schumer, John Kerry, Rahm Emanuel, Hillary Clinton and more sent in their roast jabs. But Darth Vader, he was hurt: "Stewart. I am more machine than man, twisted and evil. Responsible for the deaths of billions of sentient beings. But it’s come to my attention that you’ve been comparing me to Dick Cheney. That’s a bit harsh.”

A slate of A-list grads also made time for their old boss: Ed Helms stopped in from "The Rocky Mountain Institute For Men Who Get More Distinguished And Handsome As They Age" (no, Jon can't come visit), Steve Carell brought his signature deer-in-the-headlights stare, and in a stunning segment finale, Stephen Colbert launched into an epic "Lord of the Rings" extended metaphor that cast Stewart as Frodo ("Jon, only one of us is adult size and doesn’t have hairy toes") on a grand journey into the land of death (New Jersey) to seize the ring of power.

But it was Colbert's surprise stop to Stewart's commercial break that provided the emotional heft of the parade of tributes. Stewart, looking like he could barely contain his tears, tried to keep it together as Colbert offered sincere gratitude for his time at "The Daily Show," on behalf of all of the correspondents: "We owe you, and not just for what you did for our careers by employing us … we owe you because we learned from you .... All of us …are better at our jobs because we got to watch you do yours."

And then, the epic group hug:

Here's what the correspondents had to say for themselves: