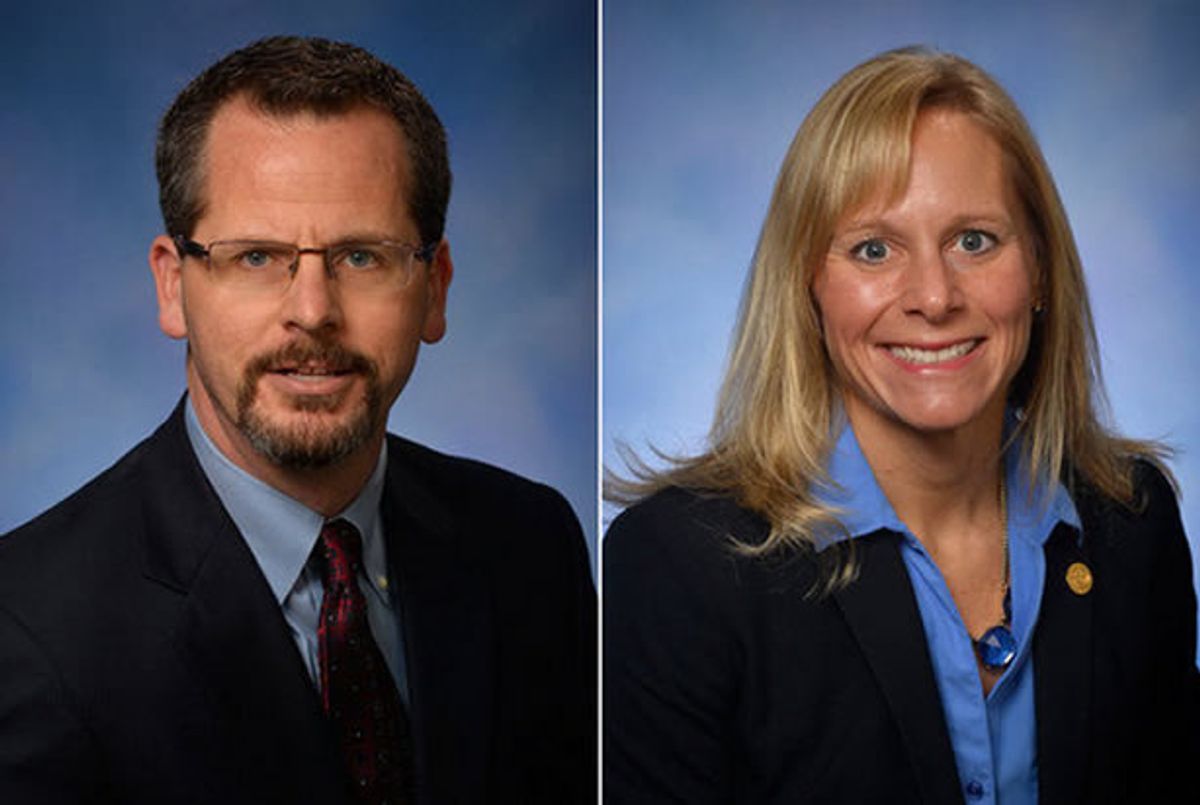 Michigan state Representatives Todd Courser (R) and Cindy Gamrat (R) are under investigation after the Detroit News released tapes of Courser imploring House aide Ben Graham to create a "smear campaign" that would make the revelation of his affair with Gamrat seem "tame by comparison," MLive.com's Jonathan Oosting reports.

Courser and Gamrat are both freshmen representatives with strong Tea Party affiliations -- the pair self-identify as Tea Party "gladiators" -- and they have been at odds with establishment Republicans since the moment they entered the Michigan House. The duo had an unusual arrangement, sharing an office and three aides. Gamrat was kicked out of the Republican caucus in April after she was caught leaking confidential GOP documents.

In May, both received identical anonymous text messages indicating that knowledge of their affair was about to become public information. Courser wanted to "just like get in front of it, head it off," and decided that a mass email to Michigan Republicans alleging that Courser was caught having "paid male-on-male sex behind a prominent Lansing nightclub" would be the best way to handle the impending revelations.

"In a controlled burn, you do a little bit of truth mixed in with a lot of lies," the Tea Party-supported, socially conservative Courser explained to Graham. "It’s what they won’t expect. At that point, if they don’t have some really, really, really offensive stuff, it will be tough for them to bring it after this."

Graham refused to write the email, saying "nobody's going to believe any of that," but Courser said that the email was "already written" and that Gamrat had "agreed" that it should be sent. All they needed was for him to create an anonymous email address from which to send it.

Graham again declined, writing Courser a text message in which he said that "its [sic] going to blow up and I can't help cover it up. If it wasn't true I would go to the end of the earth to defend you but I can't help you cover it up."

His attempt to "inoculate the herd" failed, in part because he fired Graham a few weeks after the aide had refused to assist in the cover up. What Courser did not know is that Graham had been recording his conversations with the representative for weeks.

Michigan House Speaker Kevin Cotter initiated an investigation into whether Courser and Gamrat misused their offices in order to cover up their personal relationship -- and whether they fired Graham in retaliation for his unwillingness to assist them in doing so.

"The office will review the matter and determine whether there was a violation of House rules or any evidence of illegal behavior, and will follow-up with any and all appropriate measures, including disciplinary steps," Cotter told MLive.com.

"We will not stand for any violation of House rules or law, and we will not let anyone's actions tarnish this institution or take away from the work we do every day to improve the lives of the hard-working men and women of this great state."