The sound & fury of the GOP debate: A candidate-by-candidate breakdown of its weirdest & most idiotic moments

The GOP debate was a tale told by idiots. Trump blustered, Rand wilted, and Ted Cruz was really, really creepy 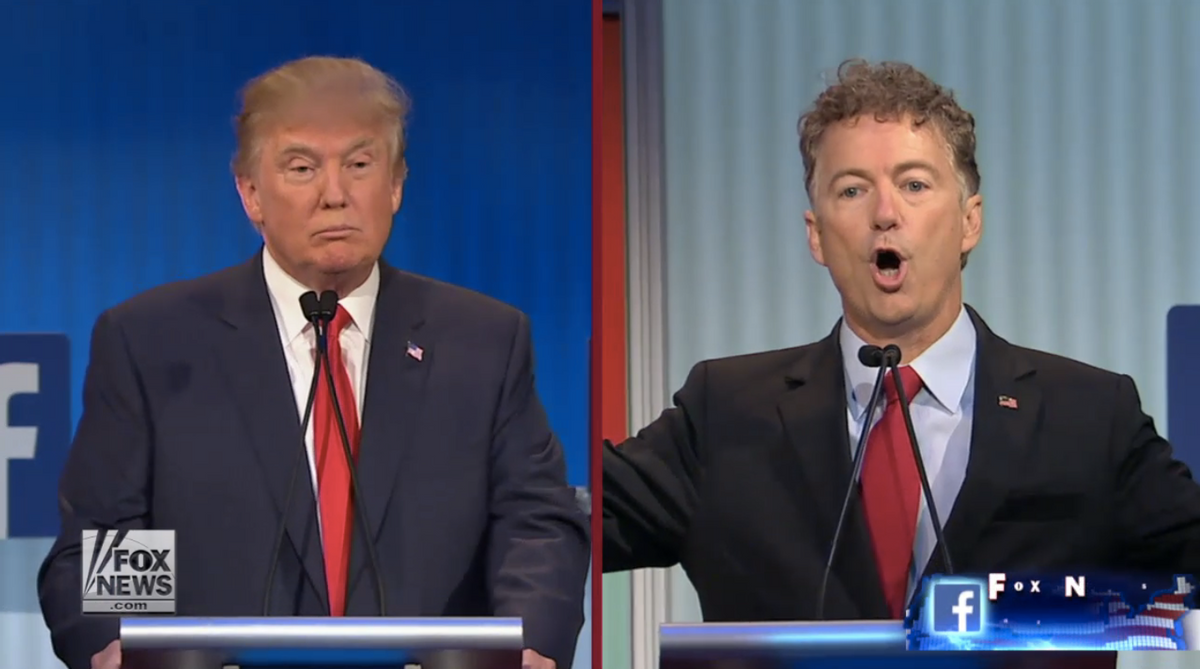 Everyone involved in the broadcast was complicit in the idiocy. The moderators set the tone with their inane questions and refusal to demand intelligible answers. As best I could tell, their job was to smile and nod affirmatively. (Except when it came to Donald Trump.) The candidates offered no policies, no plans, no ideas – only platitudes and awkwardly delivered snipes. The audience did their part, too. Every fatuous remark was applauded rapturously and without thought. No one, it seems, was bothered by the non-answers. Perhaps the most depressing part was the makeup of the crowd, which was about as diverse as a U2 concert. The shimmering sea of whiteness was, if nothing else, a reminder of what diversity looks like in the Republican Party.

At any rate, if you were fortunate enough to miss the debate, here are my takeaways for each candidate. No attempt was made to organize or make sense of these observations. They were recorded in real time and are as incoherent as the sources.

Trump tries desperately to paper over his ignorance with unjustified confidence. I notice he squints peevishly when challenged or when discharging bullshit. He began by making a few things very clear: He’s rich, doesn’t give a shit, and you can stick your political correctness up your ass. He took full credit for the immigration debate, noting that none of these “losers” would be talking about immigration if he hadn’t called Mexicans “rapists” and “criminals.” The big problem, he said, was that the Mexicans are “cunning” and American politicians are “stupid.” His evidence of the enormity of the problem was that some of his Border Patrol buddies told him so. His solution: fire the “stupid people.” Also, build a big wall, like China did. When pressed about filing for bankruptcy four times, Trump's response was: Fuck you, everyone else did, too. He also weighed in on foreign policy. On Iran, for example: We need a better deal because the current deal is bad, and Trump can get a better deal because he is a “winner,” and knows how to deal with those pesky Persians. Finally, he defended his flip-flop on abortion. He explained that he used to be pro-choice but then his friend had a baby who, it turns out, is now awesome. This revealed to him the true value of life, which is why he is now pro-life.

First observation: Jeb is more like his brother George W. than I thought – a little taller and a little less bumbling, but there’s a lot of W. there if you pay attention. In any case, Jeb reached peak awkward on the question of Iraq. He made clear that the Iraq War was a “terrible mistake” and based on “faulty intelligence.” I suspect he wanted to say "manufactured intelligence," but he rightly resisted the urge to be truthful. He also said that while the war was pointless and accomplished nothing apart from fracturing a critical region, all the deaths that resulted from it were meaningful and definitely not in vain. The reason is simple: We’ll all feel worse if we acknowledge that the casualties were unnecessary, so we shouldn’t do that. Also, as governor of Florida, he had to call the families of soldiers who died, and that would’ve been much harder if the deaths were meaningless. Lastly, he championed his defunding of Planned Parenthood in Florida. He stressed that his goal was to “create a culture of life,” so he hindered the efforts of an organization dedicated to providing essential health services to women – you know, because he respects life, which apparently only counts if unborn.

Paul immediately appeared desperate for attention. (Attention he would never receive.) He provided the first awkward moment of the debate by launching an obviously rehearsed jab at Trump two seconds in. Needless to say, it fell flat. Sadly, Paul contributed very little apart from his opening gambit. His lone highlight was his brief tussle with the designated-tough-guy Chris Christie. The fight consisted of Paul getting out-alpha’d by the New Jersey governor while defending the constitution and criticizing illegal government surveillance. Sensing his defeat, Paul concluded by reminding the audience that Christie once gave Obama a “big hug” and that that’s something he should be embarrassed about it. Hugs = socialism.

Let’s be honest: Ted Cruz is creepy. He also appears pathologically unlikeable – a sentiment obviously shared by his colleagues. The thing about Cruz is that he never really says anything. I honestly don’t remember a single point he made last night. His desperate desire for applause combined with his penchant for speaking as though he’s auditioning for "Hamlet" is just too distracting. I was too busy not liking him to notice what he was saying. My guess is I’m not alone.

There weren’t many highlights for Christie. Two things stand out: 1) He’s “darn proud” of his failures as governor of New Jersey. Sure, the state’s a mess and he’s passionately hated by his constituents, but he doesn’t give a damn. He’s a badass from New Jersey who gives zero damns about his record or reputation. 2) He made clear in his duel with Paul that he also doesn’t give a damn about the Constitution – at least not when kicking terrorist ass is on the agenda. Unlike that weak-kneed know-it-all Rand Paul, Christie was in New Jersey when 9/11 happened. He hugged the families of victims. This isn’t an abstraction for him. (Something something Rudy Giuliani.) He said he’d happily violate the constitution if he thinks he’d be protecting the homeland -- and goddammit he won’t’ apologize for it either.

Huckabee performed his shtick with aplomb, as he always does. It’s a weird combination of folksy uncle and religious lunatic. I remember a couple of points he made. There was, naturally, the bit about abortion. He dropped a little science on the audience, noting that a person is a person at the moment of conception. Strangely enough, he also believes a zygote has constitutional rights, but an adult woman does not have sovereignty over her own body. He does not appear to see any inconsistencies there. Huckabee also chimed in on the Iran debate. His policy is pretty simple: The purpose of the military is to “kill people and break things,” so we should just let them handle this diplomacy stuff. Problem solved.

I have to say, Kasich was surprisingly sane and decent. (Translation: He is doomed.) Perhaps he just looks that way on a stage studded with simpletons. In any event, his moment came fairly early on, when declared boldly and courageously (given the room) that we should care about poor people. He even had the audacity to suggest that Christians should be Christ-like. I doubt that will resonate with the GOP base, but I applaud Kasich’s bravery.

There’s no other way to say this, so I’ll just say it: Ben Carson has absolutely no idea what he’s talking about. He can’t complete a sentence without staring at his notes and seems totally ignorant of the issues. He did, however, offer a few half-baked thoughts. He said we have to get serious about war. Lots and lots of serious war-waging is on the agenda. He also made clear that he wouldn’t actually do anything different or illegal; he would just not be politically correct about said war-waging. (Take that, evildoers!) Carson also took a courageous stand on the #BlackLivesMatter issue. Sure, he said, black bodies are being gunned down by white cops, but we have to move on. He assured the blindingly white crowd that racism isn’t really a problem. All this brooding about race is just bringing us down, so let’s not do that anymore. If Carson were honest, he would just say he’s there for the future speaking fees. The man has no interest in being president; he’s selling books.

Walker escaped the debate without completely embarrassing himself. But then, he only really spoke up during the foreign policy segment. Obviously, like Trump, he thinks the Iran deal is no good, and as such he would terminate it. What would he do instead, you ask? Well, he’d reinstate the sanctions (which would’ve allowed Iran to continue building the bomb he says we can’t let them build). Then he’d just ask the other important countries -- virtually all of whom support the deal -- to join us in reinstating the sanctions that they no longer support.

Rubio is clearly polished, and strains for earnestness with every sentence – which is nearly charming if you don’t think about it too much. I almost started to like him until the end of the debate, when God was the topic. Without a hint of doubt, he announced that God was a Republican. The proof is obvious: He blessed the GOP with a cornucopia of candidates. (Forget that most of them are unserious circus performers.) The logical conclusion, of course, which Rubio accepted, was that God choose to smite the Democrats by giving them only a small handful of candidates, which includes the supremely qualified, but evidently wicked Hillary Clinton. When Rubio doesn’t win, I’ll only remember that he said these stupid things.

That’s about it. If you’re wondering who won the debate, I have no idea. We’ll have to wait and see who gets the batshit bump in the post-debate polls.