They're all Todd Akin now: How the Planned Parenthood sting backfired on Republicans

The Cleveland debate made it clear: the 2016 GOP candidates are turning themselves into the anti-choice extremist 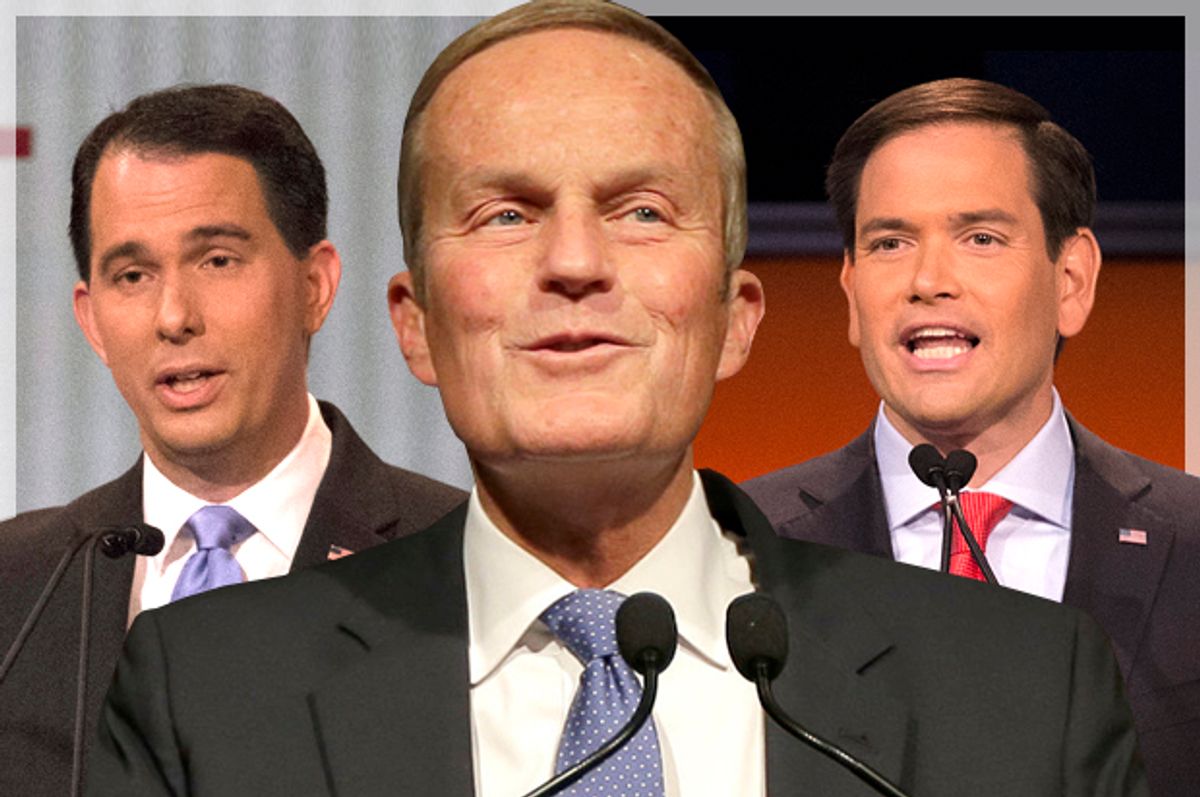 Those infamous Planned Parenthood “sting” videos, deceptively edited and perhaps illegally obtained, were the years-long project of some of the most extreme, even violent figures of the anti-abortion world. They were designed to “ACORN” Planned Parenthood – that is, take a long-demonized element of progressive Democratic politics out of the game for good.

But the hoax perpetrated by the Campaign for Medical Progress, to dishonestly claim Planned Parenthood “sells” fetal tissue after abortions, may have backfired on the right, judging from the anti-choice pyrotechnics that erupted on stage in Cleveland Thursday night. CMP intended to hurt Planned Parenthood and Democrats in the run-up to the 2016 presidential campaign. But they seem to have hurt the GOP, by tricking the 2016 candidates into believing there's more revulsion at both abortion, and at the respected women’s healthcare provider long attacked by conservatives, than there actually is.

The anti-abortion one-upmanship at the debate showed how the candidates are misreading the political opportunities and turning themselves into Todd Akin, the Republican who challenged Missouri Sen. Claire McCaskill in 2012. Akin, you’ll recall, was disputing the need for a rape exception to an abortion ban when he told an interviewer that in cases of “legitimate rape,” a woman’s body magically has a way to “shut that whole thing down.” His idiocy helped not only McCaskill but President Obama that year. (Three quarters of Americans believe abortion should be legal in cases of rape, by the way.)

Nobody said anything quite that crude and stupid about women’s bodies Thursday night, but some of the answers were equally crazy. Debate “winner” Marco Rubio disavowed his own past support for abortion bans that included a rape and incest exception, and came out for personhood legislation. Gov. Scott Walker, who personally asked Republicans in the Wisconsin legislature to write a 20-week abortion ban without any exceptions, refused to squirm when Megyn Kelly asked “Would you really let a mother die rather than have an abortion?”

Mike Huckabee, who has refused to rule out using federal troops to stop abortion, insisted the Fifth and Fourteenth Amendments to the Constitution actually mean abortion is illegal because “DNA schedules.” Or something.

Jeb Bush, squirming over a question about his association with a Michael Bloomberg charity that also funded Planned Parenthood, was forced to bring up his disgusting persecution of Michael Schiavo, the husband of braindead Florida woman Terri Schiavo, a decade ago – not a winning issue for Bush. He also bragged about defunding Planned Parenthood as Florida governor.

Donald Trump gave us a memorable Trumpism when asked why he changed his mind on abortion. Some friends “were going to have a child, and it was going to be aborted,” Trump shared. “And it wasn’t aborted. And that child today is a total superstar.” The moderators didn’t follow up to find out whether, had the child turned out to be merely mediocre, Trump would have remained pro-choice.

Which brings up another way the Fox moderators tried to help the GOP Tuesday night: Not only did they go after Trump, so his rivals wouldn’t have to, they didn’t ask a question I expected would be on their agenda: Did the candidates support a move to shut down the government over their party’s failed attempt to defund Planned Parenthood?

That would have made for some memorable debate, because the field is split on the issue. Trump, along with Sen. Ted Cruz, supports a government shutdown; Sen. Rand Paul and Gov. Chris Christie, debate antagonists, actually stand together in opposing the idea, while Bush, Rubio, Huckabee and Walker have ducked the issue.

Savvy Republicans oppose such a move, of course, because once again, it would hurt the party. But that doesn’t mean it will go away. The Fox moderators decided to deprive Democrats of footage that would have shown how many of the 2016 candidates are trying to out-Akin Todd Akin this time around.

Meanwhile, the most recent NBC News/Wall Street Journal poll shows Planned Parenthood remains the nation's most trusted organization in the wake of the smear campaign against it --  the NRA comes in second.

That's part of why, in the days after the first videos were released, Hillary Clinton came out strong in support of Planned Parenthood. She then seemed to wobble a little, calling the videos “disturbing.” But the extent of Clinton’s wobble was a little exaggerated, since even Planned Parenthood president Cecile Richards acknowledged that the videos were disturbing when she apologized for the “tone” with which one medical director discussed fetal tissue donation.

This week Clinton came out even more forcefully, with a video declaring her continued support for the organization. “If this feels like a full-on assault on women’s health, that’s because it is,” Clinton said in the video. “When politicians talk about defunding Planned Parenthood, they’re talking about blocking millions of women, men and young people from live-saving preventive care.” Clinton, and all Planned Parenthood supporters, know that defunding the group polls terribly among American voters.

Those CMP videos were intended to put Democrats on the defensive, but they’ve instead done that to Republicans. They’ve convinced the GOP field that there’s less support for legal abortion, and for Planned Parenthood, than there is. Thus Hillary Clinton may get to run against a slightly saner Todd Akin next year, and that won’t end well for the GOP.

An earlier version of this post said Planned Parenthood was second to the NRA in the recent NBC/Wall Street Journal poll.