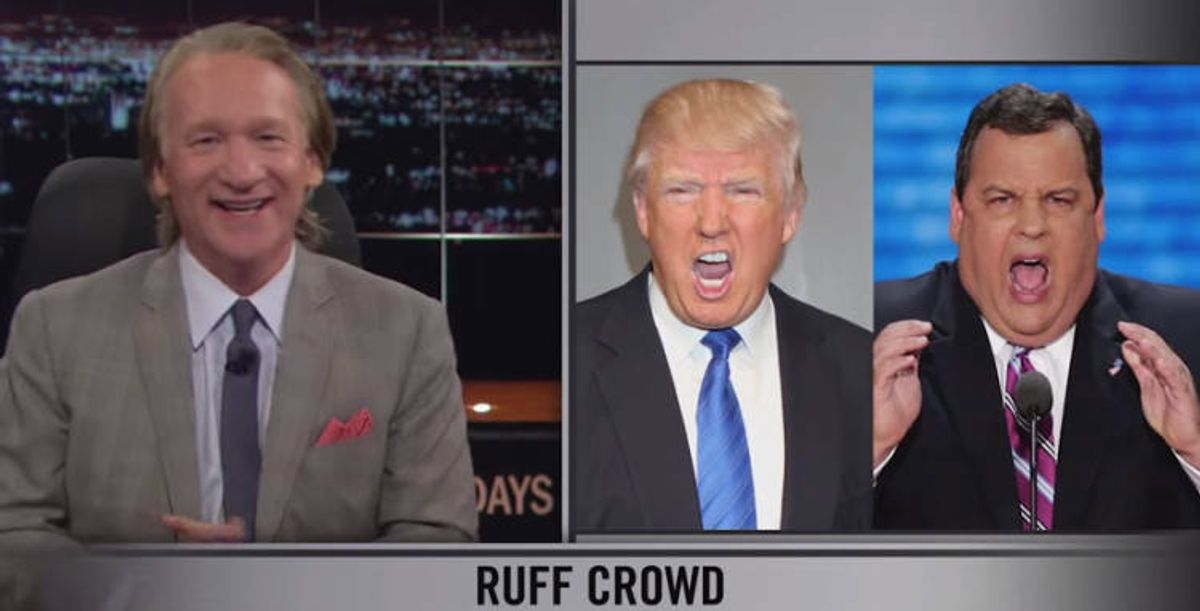 HBO's "Real Time with Bill Maher" is back for it's 13th season just in time to deliver the comedic takedown of this week's first Republican primary debate that we've all been missing since Jon Stewart's final sign-off and Maher did not hold back, blasting centerstage ham Donald Trump as a "nasty, boorish, sexist, ignorant, smug."

On last night's episode, Maher thanked Jesus for timing his shows return with the Fox News Republican primary debate which he described as "a Comedy Central Roast of the U.S. Constitution.”

"Have you ever taken ecstasy," Maher asked his audience. "It was the opposite of that.” Maher joked that after "they first brought out Reagan's skull for good luck" both debates -- the main event and the "baby table" -- amounted to little more than "A tsunami of stupid” featuring a "nasty, boorish, sexist, ignorant, smug":

To understand today’s Republican Party, you have to understand that despite the fact that they had on the stage five governors, three senators, and a brain surgeon, first and foremost they wanted to get the opinion of Donald Trump—a ham-colored cartoon character from I Love the ‘80s. Once you accept that, the rest of the night makes perfect sense

Maher noted that besides the presence of a reality-TV star at centerstage (who Maher joked made things awkward with his "gaffe" when he asked Florida Sen. Marco Rubio "to bring his car around") the GOP debate turned out to be standard conservative fare: "Muslims are out to kill you. Mexicans are out to rape you and if get impregnated by one you have to bring it to term":

That’s all they have to sell: fear. Hope and change meet pee and poo. The entire slate of them up there seemed entirely unaware of the fact that women can now vote. Megyn Kelly asked Trump right off the bat about Trump calling women ‘fat pigs,’ ‘slobs,’ and ‘dogs.’ Trump’s answer? ‘I don’t have time for political correctness.’ He’s like one of those construction workers from the ‘70s who goes, ‘Nice tits. Oh, what? I can’t compliment a lady anymore?’ It’s crazy.”

But in an interview earlier this week Maher called Trump a "genius."

“Even though I don’t agree with everything Donald Trump says by far, it is sort of refreshing to have a politician who isn’t always walking everything back and who isn’t completely pre-programmed,” Maher told the Charleston Post and Courier":

That’s his genius, he doesn’t apologize for anything. He’s the king of brushing things off his shoulder. And this is what’s attractive about him, I have to say, as somebody who did a show called Politically Incorrect, who was always being criticized for speaking too honestly ... He’s sort of the anti-Mitt Romney. Mitt Romney, people hated him because he was so robotic. Well, you don’t like robotic, Trump is your guy.