Unfazed by Tricky Dick's resignation, the right doubled down on his politics of grievance and division 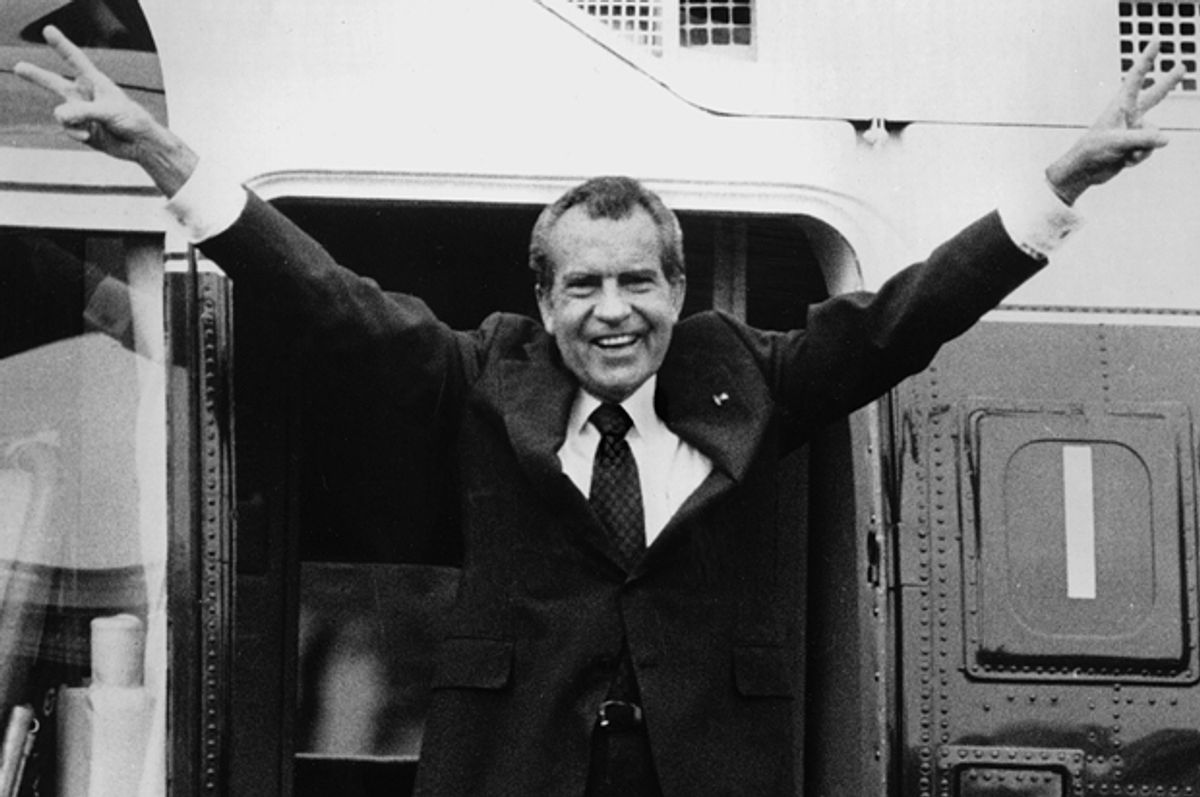 When your own lawyer calls it “ratfucking,” it might be time to think twice about what you’re doing.

The man who didn’t think twice, of course, was President Richard Nixon, who on August 9, 1974, became the first president in American history to resign. But rather than serving as a cautionary tale, his tactics became the playbook for Movement Conservatives.

The roots of Nixon’s political descent lay at least as far back as May 1970, when the shooting of four young Americans at Kent State University began to turn the president's moderate supporters against him. As the nation recoiled from the sight of a young woman screaming over a murdered friend and the father of one of the victims asked how such a thing could have happened in America, Nixon declared the protesters “bums” and blamed the students themselves for the violence that had taken their lives. His stance deliberately divided the nation into “us” and them,” expanding a theme he had begun the previous year. In 1969, as protests against the Vietnam War mounted, he had given a speech pleading for Americans to support his policies, calling on the “Silent Majority” to support him against “a vocal minority” imposing their views over “reason and the will of the majority” by protesting in the streets. With the Kent State shootings, he expanded the idea of a silent majority against a vocal minority to argue that it was imperative for good Americans — the ones who supported the president — to hold the line against young radicals, civil rights activists and feminists, all “special interests” determined to destroy America.

Nixon’s fear that radicals and special interests were trying to undermine his presidency — and thus America — reached new heights in June 1971, when the New York Times began to publish what became known as the Pentagon Papers. This secret government study detailing American involvement in Vietnam concluded that presidents from Truman to Johnson had lied to the American people about the war. While the study ended before the Nixon administration, Nixon thought the leak by Daniel Ellsberg, who worked on the study, revealed a conspiracy to undermine his Vietnam policy. If people leaked the same sort of information about him — and there was plenty to leak — they would destroy his administration and hand the 1972 election to a Democrat.

The drive to “screw” his enemies began to consume Nixon. When the FBI did not seem to be aggressive enough in hunting down the supposed conspirators, the president put together a Special Investigations Unit out of the White House to stop leaks — thus they were called “plumbers.” The plumbers burglarized the office of Ellsberg’s psychiatrist in California, hoping to find something to discredit Ellsberg, then they moved on to bigger targets. By January 1972, the Committee to Reelect the President, dubbed CREEP as its misdeeds came out, sabotaged opponents before the 1972 election. Their “ratfucking” as they put it, involved planting fake letters in newspapers, hiring vendors for Democratic rallies and then ignoring the unpaid bills and planting spies in opponent’s camps. Finally, on June 17, 1972, they set out to wiretap the headquarters of the Democratic National Committee in Washington, D.C.’s fashionable Watergate office complex.

When a Watergate security guard noticed doors taped open, he called the police, who arrested five men ransacking the DNC’s files. The White House immediately denounced what it called a “third-rate burglary attempt,” and the Watergate break-in gained no traction before the 1972 election, which Nixon and Vice-President Spiro Agnew won with an astonishing 60.7% of the popular vote. But two young Washington Post reporters refused to let go. Bob Woodward and Carl Bernstein followed the trail back to the White House and by March 1973, the scheme was beginning to unravel. A burglar claimed he had committed perjury; White House counsel John Dean turned state’s evidence; special prosecutor Archibald Cox began investigations; the Senate held hearings. By August 1974, the trail led directly to Nixon, and he resigned to avoid certain conviction in an upcoming impeachment trial.

In his resignation speech, Nixon refused to acknowledge that he had done anything wrong. Instead, he blamed the press for “leaks and accusations and innuendo” that had brought him down. The problem was not his actions, he told the nation, but the actions of his enemies.

Nixon’s division of America into “us” and “them” was his ticket to political success, and he refused to abandon it, even at the end. But why were so many Americans willing to rally to an ideological vision that not only tore the nation apart, but also brought the nation to a crisis from which it initially appeared it might not recover?

Nixon’s mentor Dwight D. Eisenhower had some ideas about why people embraced division. The general had seen the horrific results of a divided society when his troops liberated Ohrdruf, the Nazi concentration camp that funneled prisoners to Buchenwald. Profoundly shocked by the atrocities regular people had visited on their fellow human beings, Eisenhower had given much thought to how men could be brought so low. He had come to believe that economically or culturally dispossessed people were natural targets for political and religious extremists who promised to restore them to significance. By demonizing an “other,” dictators could rally dispossessed people to their standard. Once followers were “true believers” in that cause, they could not be swayed from it; the nature of true belief is to hang on to faith ever more tightly in the face of contrary evidence.

Eisenhower had seen where such blind loyalty could lead, and he recoiled from it. As president, he set out to develop national consensus — and thus to keep “cruelty, bestiality and savagery,” from America — by raising standards of living and promoting education.

The overwhelming popularity of Eisenhower’s Middle Way left little political traction for wealthy opponents, who hated the taxes necessary to pay for social programs and loathed labor regulation. Unable to offer an equally popular political vision, Movement Conservatives turned to the very tactics Eisenhower decried, seeking to create a constituency by stirring up hatred of an “enemy” that was undermining America. They avoided facts in favor of rumor and allegations, and convinced Americans suffering in the economic and cultural upheaval of the late 1960s and early 1970s that the nation was under siege from vague domestic enemies: minorities, students, women, workers. Nixon did not entirely share the values of these extremists, but his own quest for power led him to embrace their tactics. He and his men were so successful at fomenting division that, even as Nixon was forced to resign, supporters agreed with his assessment that the problem was not his criminal activity but rather the ill-will of those exposing it.

Nixon was the first national politician to rise to power on such tactics, but he would not be the last. From Nixon’s resignation, Movement Conservatives took the wrong lesson. Watergate showed them a prescription for building a constituency so loyal it would support anything so long as its members were part of the “we” using despicable tactics against “them.” Movement Conservatives invented the Welfare Queen and the Willie Horton ads, swift-boated John Kerry, claimed that Hawaii native Barack Obama was born in Kenya and underwrote every imaginable lie about the Clintons. They undercut the moderate Republicans they called RINOs almost as viciously as they hit Democrats, always positioning themselves as true Americans standing against the freeloaders, minorities and women who were trying to destroy the country. Their tactics revealed that Eisenhower was right to be afraid: even in America, a political system based on demonizing an enemy could create a constituency that would not think twice about ratfucking.