Steve Jobs knew: Combining technical knowledge with the skills built by study of the humanities is the ideal 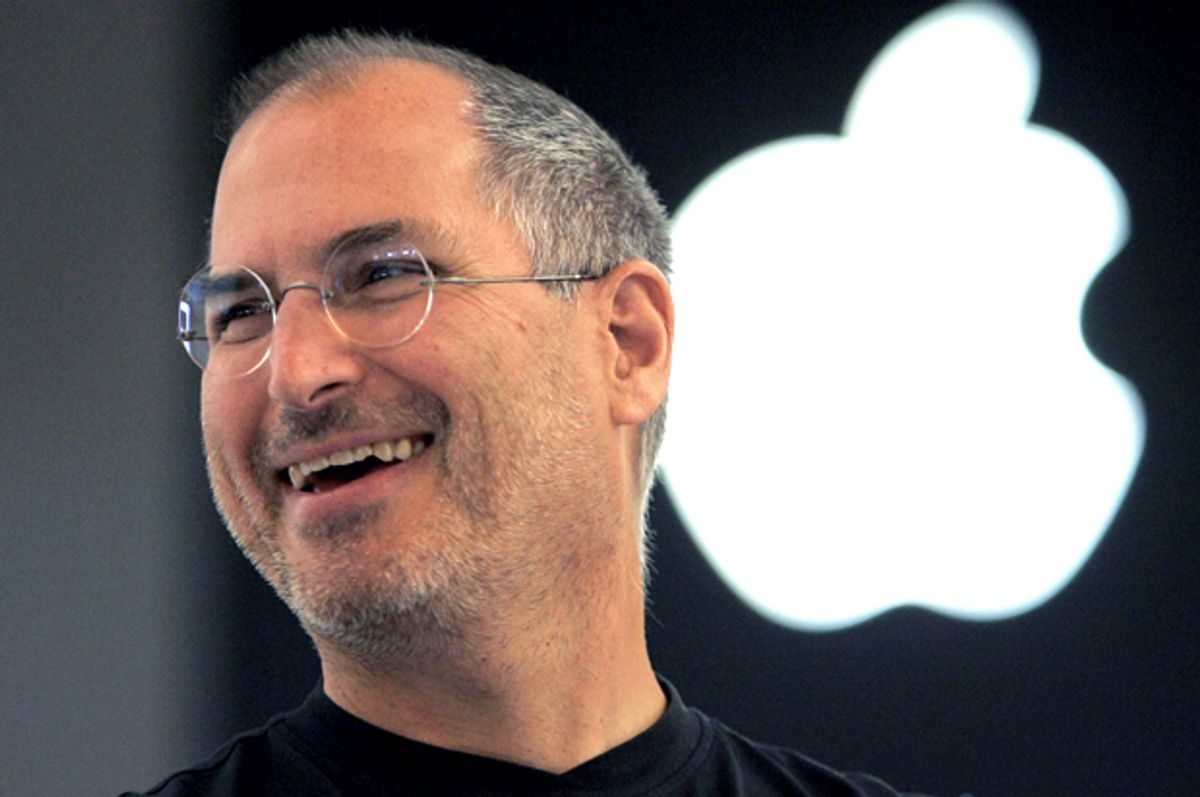 Reprinted from "Humans Are Underrated: What High Achievers Know That Brilliant Machines Never Will"

How Companies Are Building the High-Value Skills

Do companies need to be as diligent as the military in making sure employees are skilled in social interaction? We’re long past the days when millions of assembly-line workers were little more than low-maintenance machines, doing the same repetitive motions, yet some might still argue that for certain successful companies, personal interaction just isn’t all that important. Consider Google—one of the world’s most valuable companies. We’ve seen that it takes great pains to get employees talking with one another, but whether they’re socially skilled is a separate question. The company is famous for prizing sheer brainpower above all. At one time it hired only graduates of elite schools with near-perfect—or absolutely perfect—SAT scores. In job interviews, applicants have been asked how much they should charge to wash all the windows in Seattle, or how many golf balls would fit in a school bus. There are no correct answers; the interviewer just wants to see how an applicant thinks.

But in fact, skills of human interaction are key even at Google. The company no longer hires only from top schools or only people with stunning test scores. It does, however, ask every applicant for any job how he or she “has flexed different muscles in various situations to mobilize a team,” executive chairman Eric Schmidt has reported. The company is also interested in every applicant’s “collaborative nature.” You’d still better be really smart, but you won’t have a chance of working there if you aren’t also off-the-charts good at interacting with others.

And then, if somehow you’re in that fraction of 1 percent of applicants who get hired, Google makes sure you and your colleagues interact, through such tactics as the carefully calibrated lunch line and the cafeteria-style tables described in chapter 9.  The company also may well try to make you still better at interpersonal skills, using tools much like the military's. Google developed a cloud-based mobile game for helping team members work together better, starting with exercises to understand themselves and their teammates ("You have strong interpersonal skills and a compassionate nature. People gravitate toward you as a teacher...."). The curricula embedded in the game could last from a month to a year. The game was created at the University of Central Florida's Institute for Simulation and Training, which has developed a great deal of  military simulation technology, such as an app called Combat Hunter used in Marine Corps training. As you might suspect, even it includes training in skills of human interaction. One Marine reported that the training "helped me under­stand how to think and plan like the enemy would." Discerning another person's thoughts and responding appropriately--it's empathy again.

Growing numbers of companies have discovered what the military learned long ago, that the supposedly ineffable, intractable, untrainable skills of  deep human interaction are in fact trainable. Managers' mind-sets are the highest hurdle to realizing the benefits. Businesses can't even begin to get better until leaders acknowledge that these skills are the key to competitive advantage, that methods of developing them may be unfamiliar, and that measuring the results will never be as easy as gauging operating efficiencies. If companies can get past those obstacles, which in most organizations are more than enough to stop managerial innovations dead in their tracks, then they have a chance. Here are some examples of what vanguard companies have done so far:

In the first run-through, every team failed to meet the targets. In fact, they achieved almost exactly the same terrible results the company was actually recording. The researchers who studied this and similar simulations say the first round is always like that. Even though the teams were told explicitly to achieve hugely better results, they mostly did what they had always done, just working faster and harder.

In the second and final round, held a week later, all the teams behaved differently. They didn't try to work faster or harder, and people in the various functions stopped focusing on their own specific goals. Instead, they pursued top-level financial goals like company revenue and profit, and they figured out how their own actions had to mesh with others' in order to meet those goals. All the teams redesigned the shop floor to shorten how material and information moved. And this time every single team beat the goals they'd been given.  The company adopted the most  successful team's solution, though in truth it was only a little better than the others, and the back-order problem dwindled almost to nothing. In simulation the workers had figured out how to interact, and in real life they may well have saved the company.

Consider a simple bit of software called the Love Machine, developed at Linden Lab, the digital entertainment company that created the enormously popular Second Life. As Grant notes, tech companies face a virulent strain of a common problem: “Many employees aim to protect their time for themselves and guard information closely, instead of sharing their time and knowledge with colleagues.” With the Love Machine software, when a colleague breaks that pattern and does you a kindness, you can send him or her a thank-you message that’s viewable by everyone. The public acknowledgment creates new incentives. An employee told Grant that the software is a way to get “tech geeks to compete to see who could be the most helpful.”

More generally, anything that encourages people to become givers is probably useful to an organization because givers are more empathetic; they “are more attentive to others’ behaviors and more attuned to their thoughts and feelings,” Grant writes. In addition, the software encouraged people not only to interact, but to interact in a spirit of openness and sharing—exactly the kind of interaction that people value most highly and that produces the best results from teams.

Those findings and more offer new hope to humanities majors, who could certainly use it. While the best-paying college majors are almost entirely in engineering, as we've seen, the worst-paying are mainly in humanities and social sciences. Yet in the emerging world of work, the abilities that the humanities nurture are precisely those that the economy will increasingly value. It isn't just because an appreciation of the humanities will help technologists create better, friendlier, more appealing technology, though that is emphatically true. It was one of Steve Jobs's favorite themes­ that his education at Reed College, a rigorous liberal arts school in Portland, Oregon, led directly to the superior look, feel, and experience of  Apple products. He named his son Reed.

But now we see also how the humanities bestow another advantage. Far more than engineering or computer science, the humanities strengthen the deep human abilities that will be critical to the success of most people, regardless of  whether they work directly in technology. Consultants Christian Madsbjerg and Mikkel B. Rasmussen, arguing that “we need more humanities majors,” observe that “when you study the writings of, say, David Foster Wallace, you learn how to step into and feel empathy for a different world than your own. His world of intricate, neurotic detail and societal critique says more about living as a young man in the 1990s than most market research graphs.” The benefits in real-world pursuits are direct, they argue: “The same skills involved in being a subtle reader of a text are involved in deeply understanding Chinese or Argentinian consumers of cars, soap or computers. They are hard skills of understanding other people, their practices and context.” Skills that employers badly want—critical thinking, clear communicating, complex problem solving—“are skills taught at the highest levels in the humanities.”

As we’ve seen, the most valuable people of all will be those who combine technical knowledge with the skills and sensibilities built by study of the humanities, as Jobs did. This is a marked contrast to the apotheosis of STEM subjects that became conventional in the late twentieth and early twenty-first centuries. STEM education will remain important for a long time. But humanities majors, take heart. The world is turning not away from you, as you’ve been led to believe, but toward you.

Reprinted from "Humans Are Underrated: What High Achievers Know That Brilliant Machines Never Will" by Geoff Colvin with permission of Portfolio, an imprint of Penguin Publishing Group, a division of Penguin Random House LLC. Copyright © Geoff Colvin, 2015