It's much worse than the words of Trump's attorney. Far too recently, wives were essentially the husband's property 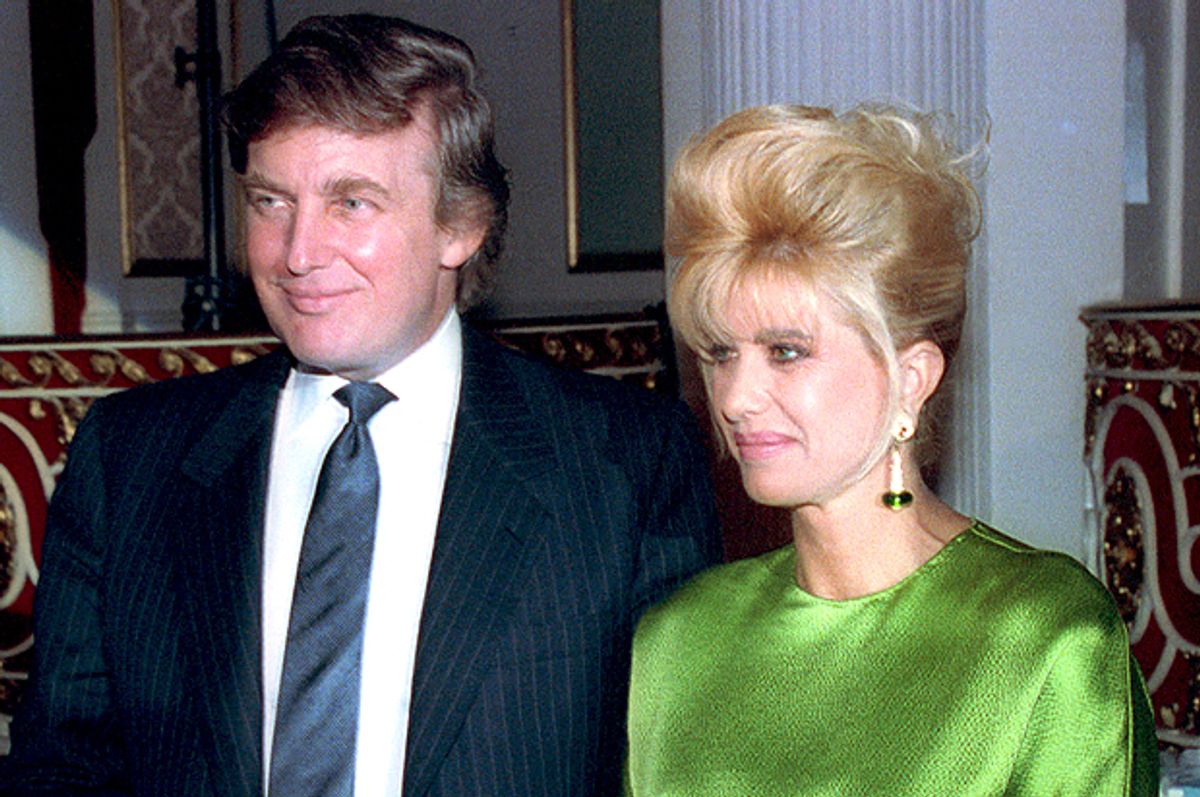 Excerpted from "The Boundaries of Desire: A Century of Bad Laws, Good Sex and Changing Identities"

Not So Nice Up Close: Rape and Violence in the Home

Broad sexual attitudes in the early twentieth century differed little from those of the previous two thousand years. The stifling influence of religion in enforcing sex-negative beliefs had abated somewhat, but doctors and scientists were picking up the slack. Sexual sins were becoming symptoms of mental illnesses. Just as medieval religious texts cataloged hundreds of sexual transgressions, the new field of sex research parsed and pathologized vast numbers of sexual acts and desires, from homosexuality and masturbation down to passions for striped handkerchiefs and the smell of roses. And while biblical injunctions restricted sex to the marriage bed (and then only to produce offspring), scientific theories now branded much nonreproductive, nonmarital sex as psychopathic. Saint Paul threatened those who pursued sex outside marriage, or for fun, with banishment from the Kingdom of God. Two millennia later, such people could find themselves excluded from earthly society, sterilized, and confined in mental hospitals.

When the purpose of marriage is reproduction, the institution becomes brutal. The personal fulfillment of spouses, especially wives, means little next to the key business at hand. A wife’s lack of pleasure in lovemaking, or her ill will toward her husband, raised concerns only to the extent that it affected her ability to conceive. If women sought other sources of intimacy or arousal, the potential penalties were barely less ruinous than those that wives had suffered for centuries. While men were expected to protect their wives from outside dangers and not beat them too severely, long-standing laws still allowed husbands to “rule and chastise” their women. Rather than protecting battered wives, the courts often looked the other way, reasoning that by doing so they were encouraging family harmony and protecting the “sacred” home from government intrusion.

In 1874, in North Carolina, Richard Oliver returned home cranky and hungry after a long night of drinking. His wife prepared him some bacon and coffee, but that only worsened his mood. The meat, it seems, was crawling with insects. Flying into a mad rage, Oliver threw the coffee pot across the kitchen. Then he went outside, fashioned two four-foot switches from a nearby bush, and proceeded to whip his wife “as hard as he could.” Had bystanders not stopped him, he would have continued until he “wor[e] her out.” For Oliver’s efforts, a local court fined him ten dollars—a penalty he thought outrageous. He took the case to the state’s supreme court, arguing that he had every right to treat his wife as he wished.

Taking sympathy on the wife, the court let the fine stand, but then it doubled back and signaled to the state’s other violent husbands that the law was still on their side. “Public policy,” the court explained, required courts to protect the “sanctity of the domestic circle” by ignoring all but the most extreme cases of violence where, for example, “permanent injury has been inflicted.” Short of that, the court declared, “it is better to shut out the public gaze, and leave the parties to forgive and forget.” In other words, unless a wife had been “worn out” by her husband’s fists or whip, she had only hope to protect her.

When the State v. Oliver case was decided, North Carolina could still claim that it was more protective of married women than ancient Assyria, where a husband could “whip his wife, pluck out her hair, mutilate her ears, or strike her with impunity.” However, given that Assyrian law is more than three thousand years old, and that the Assyrians were boorish even by ancient Near Eastern standards, that was not much to boast about. In fact, for much of the nineteenth century, as in ancient societies, American wives were essentially the property of their husbands, with only slightly greater rights than beasts of burden. Under principles reaching back to early English common law, marriage came with a metaphysical oddity called coverture, by which “the very being or legal existence of the woman is suspended” and “consolidated into that of the husband: under whose wing, protection and cover, she performs everything.”

The idea of coverture was already coming under criticism by the turn of the twentieth century, at least when money and property were involved. Wives had steadily gained the rights to own and sell their own property, appear in court as individuals, and even sue their husbands for stealing or ruining their stuff. However, this small recognition of a married woman’s “natural rights” was the easy part: a wife may have gained control over her deceased mother’s silver, but her genitals would remain her husband’s chattel for a long time to come.

Traditionally, when a woman said “I do” at the altar, the law heard her say “you can” to her husband for a lifetime of his sexual demands. The rule was put well by England’s chief justice, Matthew Hale, in the seventeenth century:

But the husband cannot be guilty of a rape committed by himself upon his lawful wife, for by their [marriage] the wife hath given up herself in this kind unto the husband which she cannot retract.

According to Lord Hale and three centuries of subsequent British and American jurists, a woman’s marriage vows included the promise of limitless access to her body, regardless of her own desires. Brides never actually stated such a promise, of course—most must have thought they could say no at least once in a while—but the law rarely lets reality stand in the way of a good oppressive doctrine. In fact, should a wife later forget her legal status as a sex toy with a pulse, the law permitted her husband to use physical force to remind her.

This rule is referred to in US and British law as the Marital Rape Exemption, though I prefer to call it what it was, a “Rape-Your-Wife Privilege.” It proved to be one of the sturdiest doctrines in the history of sex law, outlasting bars against abortion, birth control, and interracial marriage. Until recently, it was enshrined in the laws of every state in the US. The law wasn’t even criticized much until the last quarter of the twentieth century, when it was getting worse: rather than cut the Rape-Your-Wife Privilege back or eliminate it, some states were expanding it to insulate men who forced themselves on their live-in girlfriends.

In Britain, the Rape-Your-Wife Privilege first showed a crack in 1949, when a court held that a husband could not force himself on his wife if a court order separating them was already in place. However, a few years later, a British court sided with a husband who raped his wife a year after she had left him and petitioned for divorce. Incredibly, the court found that the wife had still consented to sex with her husband even though he had thrown her to the ground three times before raping her. The Rape-Your-Wife Privilege would not be definitively abolished in Britain until 1991.

It would take relentless pressure from second-wave feminists and anti-domestic violence activists to eliminate the Rape-Your-Wife Privilege in the US. In the 1970s, as one commentator put it, it was still the law that “a husband forcing sex on his wife was merely making use of his own property,” but this was changing. In a groundbreaking 1984 decision, New York’s highest court exposed the rule for the horror that it was. The case involved Mario Liberta, an abuser whom a court had ordered to stay away from his wife, Denise. Some months later, Liberta lured Denise to his motel room, where he attacked her and, as their two-year-old son watched, forced her to have oral sex and intercourse. Liberta never denied what he did to Denise that night. Rather, he argued that because they were technically married, the law should stay out of their “private” sex lives. In effect, he asked the court to do what courts had always done—protect the “sanctity of the domestic circle.” That this circle was now a tawdry motel room and the marriage a shambles were irrelevant details. Liberta and Denise were still husband and wife, and that made violent sex his prerogative.

Three decades later, Liberta’s argument sounds like a dispatch from a barbaric netherworld, but it was taken seriously. In fact, he won in the lower court. After years of subsequent legal wrangling, the state’s high court declared, finally, that the Rape-Your-Wife Privilege was indefensible on any level. Rape was rape, the court held, and it was nonsense to treat rape committed by a husband differently from that perpetrated by a stranger: “A married woman has the same right to control her own body as does an unmarried woman.” As for the idea that the “privacy” of the home should protect a married couple from state intrusion, the court opined that marital privacy “protects consensual acts, not violent sexual assaults.”

So much for New York, but the Rape-Your-Wife Privilege had many passionate defenders elsewhere. It was not until 1993, when Oklahoma and North Carolina were dragged kicking and screaming into the civilized world, that marital rape became a crime in every state. The arguments in favor of keeping the law in place still astonish. In 1980, for example, Florida representative Tom Bush argued that governments had “absolutely no business . . . invading the sanctity and intimacy” of a marriage, even when the “invasion” revealed that the husband was raping his wife. The following year, the Colorado Supreme Court upheld the rule on the ground that putting a rapist husband in jail was an “obstacle” to the husband and wife eventually reconciling. However, of all the defenders of the Rape-Your-Wife Privilege, California state senator Bob Wilson was perhaps the most forthcoming when, in 1979, he asked a group of women lobbyists: “If you can’t rape your wife, who can you rape?”

While spousal rape is now prohibited, it is underprosecuted in the US, and a number of remaining loopholes make it a less severe crime than rape committed by a stranger. Many courts and lawmakers could not shake their indulgence toward sexually violent husbands. In 1985, for example, not long after Pennsylvania eliminated the Rape-Your-Wife Privilege, its highest court complained that “a legal monster” had been set loose, as juries had now been invited “into the privacy of the marital bedroom for the purpose of supervising the manner in which marital relationships are consummated.” In other words, how can anyone determine whether sex between a husband and wife was old-fashioned consummation or violent assault? Someone might have reminded the court that such determinations are exactly what courts and juries are supposed to do and that difficulty figuring out whether sex is consensual is no excuse to give up the effort.

Excerpted from "The Boundaries of Desire: A Century of Bad Laws, Good Sex and Changing Identities" by Eric Berkowitz. Published by Counterpoint Press. Copyright 2015 by Eric Berkowitz. Reprinted with permission of the publisher. All rights reserved.