4 reasons why every "Awkward Black Girl" should be watching "Transparent"

Trust me on "Transparent" — as a fellow "ABG," I see so much of myself in the Pfefferman clan 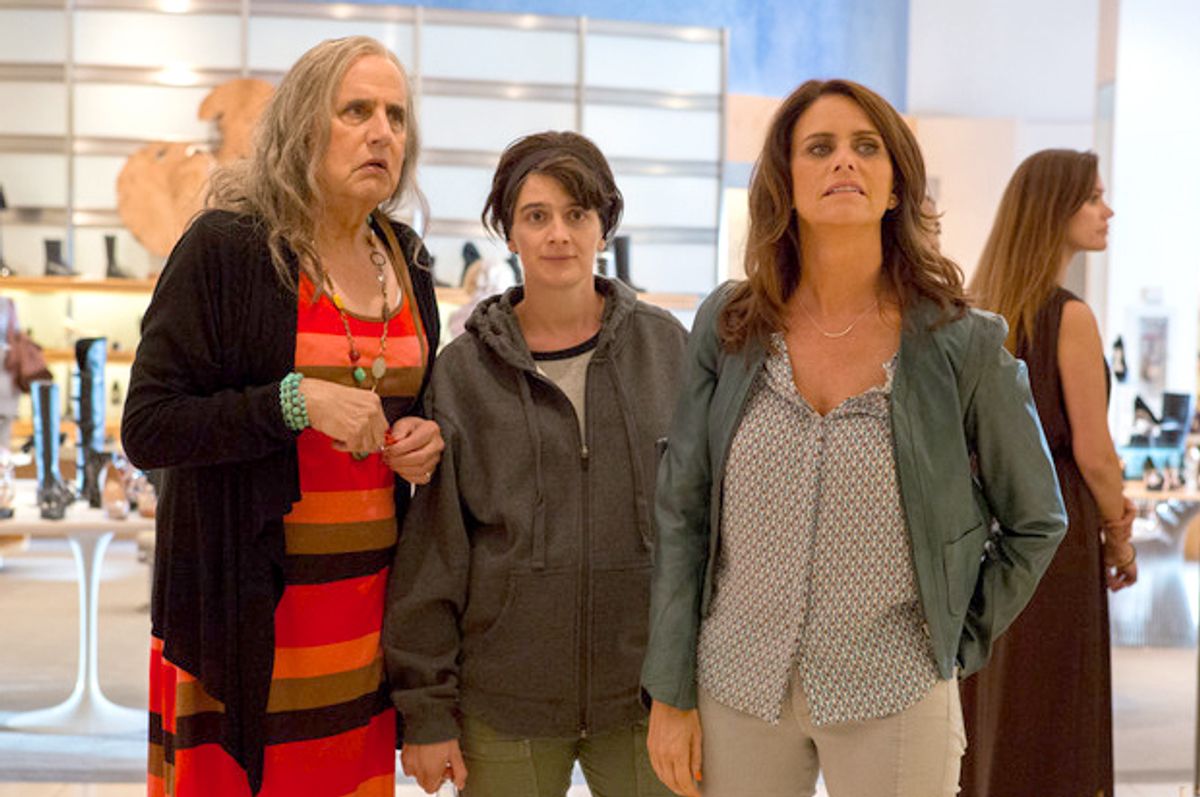 Anyone who has experienced the first season of Amazon’s “Transparent” has likely walked away with the same set of questions by the time the credits roll at the end of “Why Do We Cover the Mirrors?” The inner dialogue goes something like this: “Why aren’t all of my friends talking about this? Why isn’t the whole world talking about this? Why does the theme song keep making me cry? Has Jay Duplass always been hot? If so, how have I missed that? I wonder which one am I — Ali, Sarah or Josh? Rabbi Raquel? Ed? Why is Carrie Brownstein so perfect?” For an Awkward Black Girl watching the series, an additional question might be, “How can I get that friend who just watched the 'Love & Hip-Hop Atlanta Reunion' with me to also watch this right now?”

This question highlights the conundrum in being an ABG — a phrase made popular by the brilliant Issa Rae’s YouTube series. If you’re a self-proclaimed ABG, there’s a chance you can’t resist the “Love & Hip-Hop” series, because it’s as delicious and problematic as some of your favorite ratchet music; otherwise you’re currently boycotting all VH1 shows, but still wonder about Stevie J and Joseline from time to time. If you’re an ABG, you probably loved “Mad Men,” but wish there had been way more Teyonah Parris fierceness served up.

But the single, defining characteristic of ABGs (who are quite similar to Black Girl Nerds, though the two are not necessarily synonymous) is that, by traditional (read: stereotypical) definition, they are not considered to be “black enough.” For those demanding that black girls be [always] loud, strong, confident, outspoken, superhero types (see Cookie Lyon), they don’t quite fit in with what’s come to be expected from women of color. And for this reason, ABGs make the perfect demographic for the “Transparent” audience. The show takes on marginalization and discrimination and highlights fantastic characters who in any other series would be entirely too awkward to take center stage.

In anticipation of the second season, which we’ve just learned will premiere on December 4, here are four reasons why every self-identified Awkward Black Girl, who hasn’t already done so, should start watching Season One now.

1. Ali Pfefferman Will Give You Life

Gaby Hoffman's character (for which she was recently nominated for an Emmy) is not an awkward black girl by far. She’s an awkward Jewish girl who managed to skip out on her own bat mitzvah, often gets accused of being a lesbian (she discovers she’s actually “Middle Earth Femme”) and finds herself struggling to grow up — even as a semi-grown ass woman. Ali speaks directly to those of us who studied gender theory, and also can't resist an attractive black man who also happens to be a physical trainer (there are many of us). In “Rollin,’” one of the season’s strongest episodes (just kidding, they’re all perfect), Ali lives out a sexual nightmare so awkward (SPOILERS AHEAD), even if you can’t identify with how white girl wasted she gets on moon rocks, you’ll appreciate her ability to be completely unsexy (and far too analytical) during a [failed] threesome. When her sort-of-boyfriend’s roommate declares, “That’s yo bitch,” while backing out of the sexual tryst, it’s physically impossible not to laugh and cringe with delight.

2. The Black Sheep Is Finally Normalized

If you're an ABG you've likely stood out in your family since you first started reading comics, or listening to Nirvana, or watching Wes Anderson flicks, or awkwardly dancing to rap music, because the mechanics of the Cabbage Patch eluded you. Although Ali is a favorite, “Transparent” is so brilliantly written that every character, with his/her quirks and oddities, manages to stand out in one episode or another as the black sheep of the Pfefferman clan. It is, in this way, the perfect show for anyone who’s ever felt outcast for any reason. But because Awkward Black Girls stand out in practically all crowds (except for those rare crowds consisting solely of Awkward Black Girls, i.e. First Saturdays at the Brooklyn Museum), the capacity to identify with Ali, Sarah, Josh, Maura and the others is even stronger.

3. Fluidity Is a Helluva Drug

It’s easy to say describe “Transparent” as a show about a late-age trans woman. However, while Jeffrey Tambor’s Maura is a central figure, her narrative is only one small part of the show's mechanics, and the transitioning process is just one issue among many (including gender, religion and parenthood) that makes up the series. In the same way that the series resists a plot with one specific focus, as a genre it is neither exclusively comedy, nor drama, nor tragedy. At the risk of sounding like a French theory head, the very shape that it takes — its form — makes it appealing to a group of women who've spent most of their lives resisting labels and refusing to be pinned down as one thing or another. The fluidity of “Transparent” — and the success of the show — is incredibly important in a world where ABGs are fighting (in their own awkward ways) to be seen and heard.

4. For the Love of Cultural Dialogue

This call for ABGs to tune in to “Transparent” is not just a selfish attempt to convert everyone to Jill Soloway’s series (although I have been guilty of doing just that). It’s also an attempt to bring together varying experiences of awkwardness that should co-exist more often, especially in the TV landscape. This is one major way that cultural exchange and dialogue begins, and this is a country that is sorely lacking in such exchanges, both on and off the TV screen. (This year we were lucky enough to see one great TV storyline about a prison-induced cultural exchange between a black girl and the Jewish tradition.)

And although there will never be another show like “Transparent,” we are absolutely starved for similarly strange dramedy-types that would put an Awkward Black Girl at the center of the narrative. It’s great to hear that the new season of “Transparent” will feature comedian Brittani Nichols, and it’s thrilling to hear about Issa Rae’s upcoming HBO series “Insecure.” The incredibly awkward and hilarious “Clench & Release” YouTube series from “Unbreakable Kimmy Schmidt” writer Charla Lauriston also proves that we ABGs have some representation out there, but it’s not enough.

As producer Lena Waithe put it in the recent New York Times feature on Issa Rae, ‘‘There are black people on television, but they’re still painted with broad strokes ... We don't have characters painted with tiny paintbrushes.’’

Decades after Ralph Ellison’s novel, there remain many invisible men, and many invisible awkward black girls. As Soloway, Rae and a handful of others work to change what is “normal” for TV, it is a fact that they are inspiring others to do the same. Who know what voices (those in the writing rooms and those in the executive rooms) may rise from the lower frequencies to speak for an unheard and under-represented people? And who knows what new black girl types (and anti-types) might be introduced to the world as a result?