When my friends dragged me to a strip club for a bachelorette party, I rolled my eyes. Then Steel took the stage 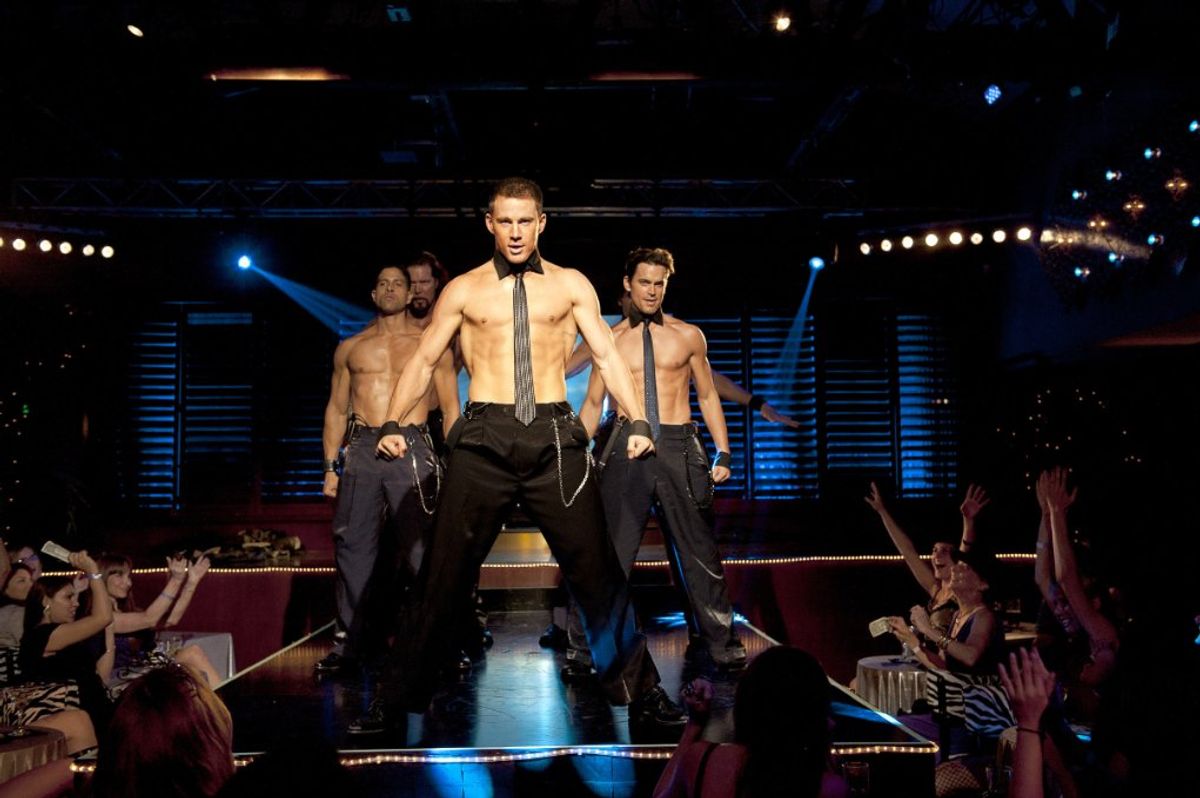 None of us really wanted to go to Montreal—not even “Mary,” the bachelorette we were honoring that weekend. We didn’t know Mary very well, except that she was a sweet girl and much younger than the two other women coming along on this adventure: my best friend, “Dee” (who asked to be called Destiny for the purposes of this story, so know that about her), and our friend “Laurie.” We’d met Mary when she got engaged to our friend “Andrew.” (Yes, all of the names have been changed, for reasons that will soon become clear.)

Soon after the engagement, Dee, Laurie, and I invited Mary to join one of our Sunday evening wine fests. In a naked attempt to be the friendliest most inclusive one, I asked Mary if we could throw her a bachelorette party. I was immediately superseded by Laurie, whose one flaw is the chronic traveler’s one-upmanship. “How about a bachelorette trip?” Laurie asked, armed with a list of destinations. Mary’s delighted expression was matched only by Dee’s startled one.

More from DAME: "I Didn't Realize I Was Being Sex-Trafficked"

Mary very much wanted to go to Vegas, but Dee, a chronic vetoer, insisted on Montreal.

A few days before the trip, I got a text from Dee: “I found a nice strip club in Montreal, if Mary wants to go.”

It was called Le 281. “The first time you try it, you may be reluctant,” a loyal visitor says in the infomercial posted to the website. “But once you’ve tried it you’re hooked.” There was some footage that gave us a glimpse inside the club: It was dark, and there we saw a man in a police costume gyrating on a chair. The website also featured some hokey photos of the dancers, and their stats: weight, height, Zodiac sign, and motivational catchphrases.

Sure, I’m no prude, I thought. Let’s go to a strip club if Mary wants to. It’s her bachelorette trip, after all.

Dee and I arrived in Montreal earlier than Laurie and Mary. It was a beautiful summer evening, warm with a cool breeze. We had dinner, strolled down a promenade, got ice cream, visited an art gallery featuring paintings of wild seascapes and tragic portraits.

It became increasingly difficult to ignore the fact that we were walking in concentric circles around the strip club. We headed toward Le 281 and stopped on the other side of the street. From the outside, it seemed genteel enough. The women lined up on a red carpet looked much younger than I’d expected. There were some middle-aged women, but most were in their early twenties, heavily made up and dressed for a night out in little skirts and high heels. They were being greeted by a devilishly handsome man with perfect cheekbones accentuated by his long brown hair pulled back into a sleek ponytail, and he was decked out in a jacket and bow tie.

“Well,” I reasoned, gazing across the street. “If we’re going to bring Mary here tomorrow, we have to know if it’s the kind of place she’d enjoy.”

“She is the bachelorette, after all,” I said.

“She is,” Dee agreed genially.

We paid our $12 (“Canadian!” Dee would remind me, bleary eyed, on the flight home) and were met by another handsome man in a bow tie, who explained the rules: No cameras. No cell phones. And no touching the dancers. And with that, we were led through a dark room to a table five feet from the stage.

As soon as I sat down, I could feel that something game-changing was occurring around me. A man was dancing on a stage. But it was more than that—a man was dancing on a stage and removing his clothing for my pleasure, because I had paid for it. A beautiful man, a man who spent hours in the gym to perfectly cater to a woman’s fantasy, was gyrating for me, and would even do so at my table for my pleasure for an additional $12—Canadian!

What can I say about that first routine, except that it was tailor-made for women? Granted, my experience of female strippers has been limited to HBO and a single lap dance during my doomed love affair with a much older man. But watching the male stripper dance on that stage, and then slowly take off his clothes, I knew that he was courting a pleasure he was intimately familiar with: It was in the arms, in the abs, in the face, the look in his eyes. His body said, “I know just what you want.” His eyes said, “This one’s for you.”

As soon as the first routine ended, a new, equally gorgeous man came on, while the first offered his services to the women seated at the tables. Every now and again, a woman would summon him over with a meaningful look, soliciting a private dance. After a few rounds of single dancers, there was a group dance, and then six men walked among the tables, scanning each customer’s face in search of a signal that their services may be desired.

More from DAME: "Our Obsession with Safety is Harming Our Kids"

Sitting in Le 281, I learned that striptease isn’t really about sex. Rather, it’s about arousal, a psychological affair. To achieve that state, there are certain conditions that have to be met: The dancers have to flash their patrons a bit of eye contact. They have to show their hard-earned muscles. And they have to appear to be having fun.

There was wit to the routines, as if the audience and the strippers were in on a joke together at the expense of our arousal. The dances were occupation-themed—the strippers were dressed as construction workers, police officers, executives, firemen—as though every job was merely a ruse for what it really concealed.

Our dancers had stage names like Jimmy, Hayden, Matthew, and Dee’s favorite, Steel. And though they were distractingly beautiful, they were also utterly interchangeable. Presumably to the strippers of Le 281, so were we, no matter our age, size, style. We are all worth the same: a $12 dance or $80 for a half-hour. The gender dynamics in the club represented a complete inversion of heterosexual culture, wherein women spend so much time trying to attain a certain standard of beauty to be desirable to men. At Le 281, the men were there to be objectified by us.

I was intoxicated by lust, but the experience went beyond the limits of my body. I learned that evening that when men exist purely to please, all women become sisters. Competition simply cannot exist when everything you see is for sale, when you are the procurer and men the procured. I felt a change come over me. I realized that there was really only one way to describe how I felt: like a man.

The next morning, I sat on a park bench with an egg sandwich and a double espresso, nursing a hangover and reveling in my delight with everything I saw the night before. Hello, lovely soft-bellied gentleman! I wanted to cry out. You are just a shittier version of something I can have for $12—Canadian! Hello, young Canadian bros out for a walk in the park! I thought. You’re not bad looking! But you’re not great either! And, while walking down the street in Old Montreal, Oh, Hello, “construction workers!” Bwahaha.

It took me a minute to realize what I was doing: I was comparing them to the hot numbers I had ogled the night before. The very experience of having objectified the Le 281 strippers, of having paid them to please us—had extended beyond the club and into the real world. It was deeply empowering—a different kind of power than the one that comes from getting what you want from a man because you are seductive enough, or devious enough. It was the power that comes from knowing that you don’t have to seduce, or cajole, or even flirt. You don’t have to be beautiful enough, or smart enough, or anything enough. Because you’re already enough if you have cash in your pocket. It was nothing less than the experience of male privilege, for the reasonable cost of $12—Canadian!

I had to go back.

For Dee and me, Montreal had shrunk from a grand city full of sights to one little storefront on the Rue Sainte Catherine.

We had been so debauched by our evening out that when Mary, our bachelorette expressed her opposition to such an outing, we actually didn’t hear her. “Come again?” I remember Dee saying more than once outside the Basilica. What followed was a day I am now ashamed of, in which I tried mercilessly, if ineffectively, to change the blushing bride’s mind.

In the end, our scheming was for naught. Mary had one drink too many, and asked if we could cut the evening short. Dee and I perked up like bloodhounds who had just picked up on the scent of a terrified rabbit.

And so we left her behind and returned to Le 281.

I don’t how know long the effects of those two nights will last, but I can tell you that I am still enjoying its desserts, which show no signs of abating. Upon reflection, I have come to see the kind of power I experienced in Montreal as morally neutral, Nietzsche style. And while some might say that two wrongs don’t make a right, after a weekend spent largely in a Montreal strip club, I now have my doubts.