Paul Krugman's shameful colonialism: Why the progressive economist has Puerto Rico all wrong

The New York Times columnist urges unemployed Puerto Ricans to migrate to the mainland. If only it were that simple 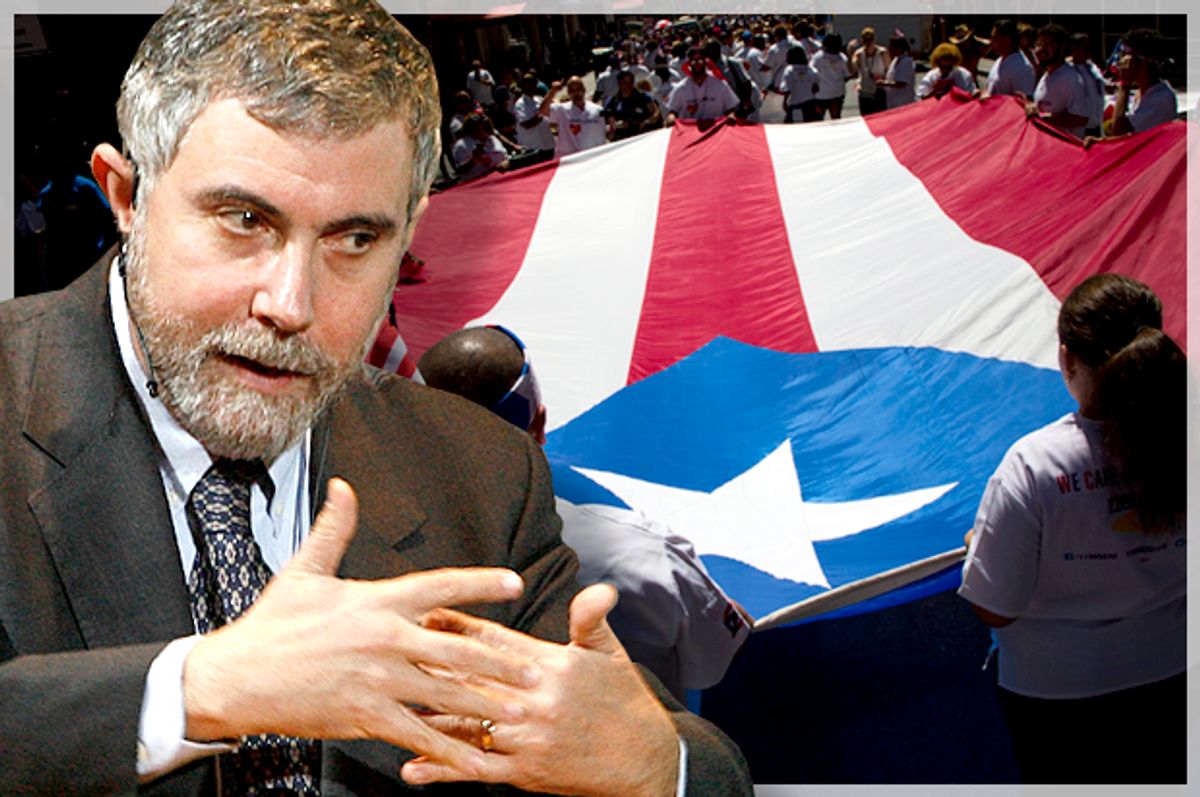 Since joining the New York Times as a columnist in 1999, Paul Krugman has emerged as a hero of sorts for the American left, and with good reason. He's been a dogged critic of George W. Bush's foreign and domestic policies and a fierce defender of the current administration's Affordable Care Act. His contempt for austerity and the hawks that champion it at home and abroad is palpable. But even the fiercest of progressives have their blind spots, and El Señor Krugman's happens to take the shape of my native Puerto Rico.

Krugman argues that Puerto Rico is the victim of seemingly uncontrollable global economics, a would-be U.S. state that finds itself — like Trayvon Martin, Eric Garner, Sandra Bland, and Samuel Dubose — in the wrong place (the Caribbean) at the wrong time (the 21st century). Thousands are fleeing the island each week, while those who remain subsist on what the commonwealth's safety net provides them. But "How terrible is that, really?" he asks rhetorically. After all, Puerto Ricans are US citizens who can move freely to the mainland in search of better jobs and opportunities. Krugman is concerned with people, not places, and herein lies the problem. For all his good intentions, he cannot think outside of the American hegemonic box. His is a benevolent kind of imperialism, but he still speaks fluent imperialese.

Perhaps most unforgivable is his implicit rejection of Puerto Rico's nationhood. While legally a territory of the United States, Puerto Rico is its own country like Cuba, France, Gambia and Mongolia. It has its own rich language, history and culture, its own race issues and bad television, mustachioed papi chulos and curvy mami chulas. And yet Puerto Rico remains militarily occupied by the United States Armed Forces. Puerto Rico’s constitution had to be approved by U.S. Congress before it was ratified in 1952. American laws and American court decisions trump Puerto Rican laws and the Puerto Rican court decisions, meaning Puerto Rico must abide the U.S. Supreme Court's disastrous ruling in Citizens United. The same deregulation and Wild West American financial rules apply as well.

In short, Puerto Rico is a colony of the United States — a country without sovereignty. And it is this wildly unequal partnership, coupled with a specific and unsavory brand of local corruption, that is largely responsible for the island's current economic crisis.

It doesn't take a Nobel prize to acknowledge that Krugman is right about the global forces that have brought Puerto Rico to its knees; the internationalized pillage of vulture funds is now accepted as the "shifting tides" of capitalism. But the solutions he proposes are naive at best and colonialist at worst. As a thought experiment the economist himself invites, let's apply Krugman's logic to the crisis in Europe: Let’s suggest to the Greeks that they should all, collectively, leave their homes and move to Germany. After all, their economic hardship is also a natural, unfortunate consequence of those same "shifting tides," of their country being "in the wrong place at the wrong time." But not to worry. The German state will provide them with a generous safety net, and then all of Greece, from the ruins of the Acropolis to its sleek Olympic stadium, will be taken over by German bankers, investment firms and billionaires. Voilà, the Greek question solved.

Señor Krugman would never dare propose such a solution to the Greek tragedy, and yet this is precisely what he's lobbying for in Puerto Rico: a forced migration and a generous gift for the very people he has fought against for most of his life as a public intellectual.

It is always devastating when a people are forced to move from a place they do not want to leave. It is a tragedy when those same people must abandon not just a region or state, but their very country and culture. Having Puerto Ricans relocate from the island to the mainland is not like hopping on the PATH train to commute from New Jersey to New York, or moving from Seattle to Portland, or even leaving the rustbelt for sunny Florida. Just as the Great Migration was borne of American economic interest, so too is this current migration rooted in a shameful history of depredation, abuse and imposition. If even our most enlightened thinkers fail to acknowledge as much, then the crisis facing Puerto Rico is much greater than its national debt.

Monxo López is a political scientist, cartographer and environmental justice activist based in the South Bronx. Follow him on Twitter @MonxoLopez