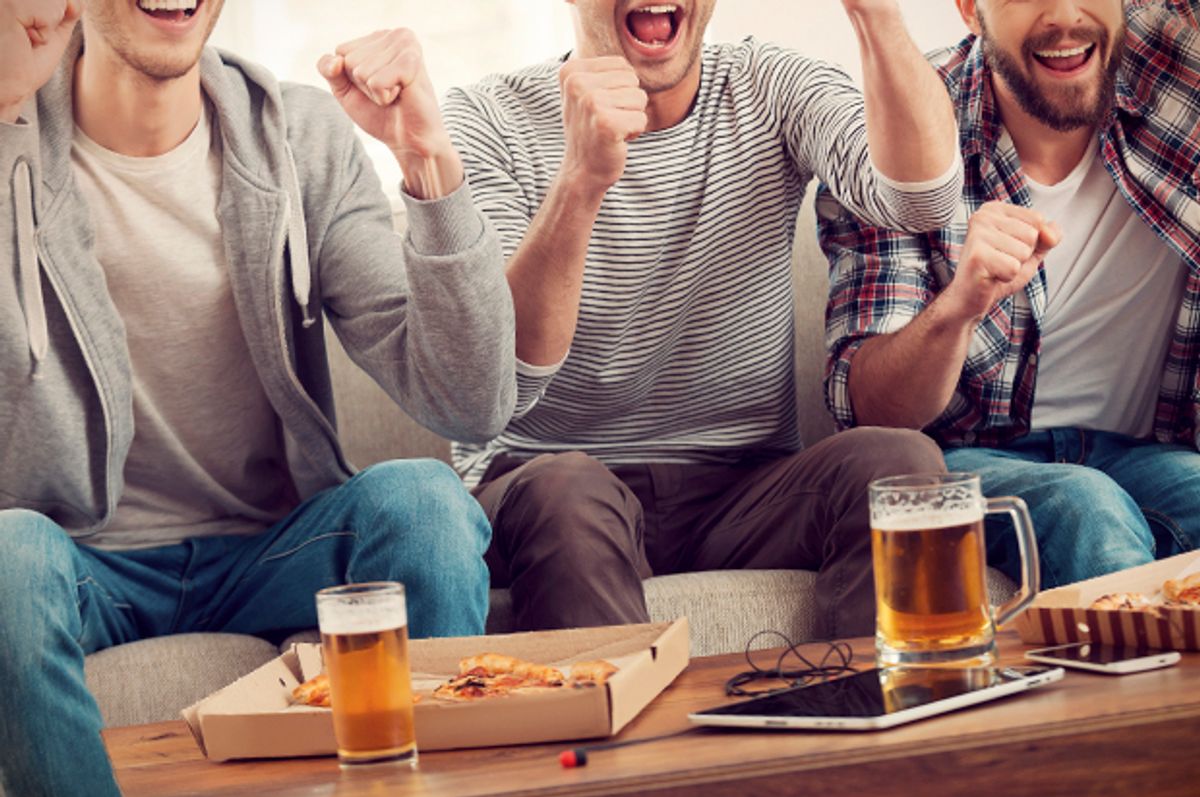 Excerpted from "Not Gay: Sex Between Straight White Men"

Let us now turn from popular culture to the different but nonetheless performative world of online personal ads—ads written by people claiming to be “straight white men” seeking sex with other “straight white men.” In 2005, some friends of mine brought to my attention some personal ads they had discovered in the “Casual Encounters” section of the online bulletin board Craigslist Los Angeles. The text of one such ad read:

Though my friends and I were/are all queer people of the post-structuralist persuasion, we marveled at the suggestion that this was the fantasy of a “straight guy.” We imagined that its author was a kinky gay man posing as straight  to enact his straight-dude fantasy. Some of us considered that perhaps  this ad was the outcome of a sad and sexually repressed life in the closet. As we scanned through three days of Craigslist posts, we discovered dozens of similar ads in which “str8” men were looking for sex with other men. A few weeks later, I revisited Casual Encounters, wondering if the impressive number of ads I’d seen earlier had been a fluke. But there they were again, seemingly countless declarations of desire purportedly written primarily by straight white “dudes”—dudes who were, as they repeatedly proclaimed, just average white guys looking to have friendly not-gay sex with other normal, average white guys. Photos of jocky looking white guys accompanied some of the ads, seemingly included to corroborate this description.

I had questions. Who were these white dudes? Exactly what kind of sex acts were they looking for? Why weren’t gay men acceptable sex partners  if what they wanted was to have sex with men? How would they know anyway? Did these men need to “prove” their heterosexuality to one another, and if so, what methods were they using to accomplish heterosexual realness while soliciting sex with men? And, perhaps  most importantly, why had my friends and I been initially so invested in claiming as gay a cultural space so decidedly intent on identifying with heterosexuality? Motivated by these questions, research assistants and I collected and analyzed 243 similar ads in the Casual Encounters section of Craigslist Los Angeles over the course of 2005 and 2006.

Perhaps what one first notices about the ads placed in Casual Encounters  is that  they are elaborate, often describing sexual scenes with a dazzling level of detail. The authors of the ads typically identify themselves as white, straight, in their twenties and thirties, and seeking sex with men, and then proceed to offer numerous hetero-authenticating details, from homophobic disavowals of gay men, to misogynistic references to violence against women, to hetero-masculine  props: beer, sports, straight porn. Collectively, the ads assert that being straight or gay is not about the biological sex of participants, but about how the sex is done— the language that will be used (before, during, and after sex), the type of pornography that will be viewed, the types of alcohol and drugs consumed, and the agreed-upon reasons for the sex itself. The following ads are representative  of dozens of similar others, in which sex between men is articulated as a casual act of “being free to be a man” that need not have any troubling/gay identitarian consequences:

What happened to the cool bi/str8 dude circle jerks?—33. What happened to a group of masc[uline] dudes just sitting around stroking, watching a game, drinking some brews, jerking, showing off, swapping college stories, maybe playing a drinking game and see what comes up?

STR8 for STR8 Dudes: I’m STR8 looking to mess around with another STR8 dude from time to time. Discreet and looking for more than one time hookups so if you respond, have the balls to follow through with this ad and meet up.

The ads depict a world in which body parts and sex acts (male mouths touching male penises, for instances) are not meaningful indicators of whether sexual participants are straight or gay. Instead, it is a willingness to identify with and consume gay culture that makes others queer, and conversely, it is str8 dudes’ mastery of hetero-masculine  culture and their capacity to infuse homosexual sex with heterosexual normalcy that makes them straight. This way of thinking about sexuality lends support to a consensus within queer studies that queerness is defined not by a presence of homosexual sex, but by a refusal of gender and sexual normativity, a position exemplified by Foucault’s assertion that “homosexuality threatens  people as a ‘way of life,’ rather than a way of having sex.” Str8 dudes’ straightness is constituted by their way of life; it is performed and substantiated through a hyper-masculine and misogynistic rejection of queer culture.

The scenes described in the ads—the props, the costumes, the dialogue—capture the drama and spectacle of white male homosociality. What do young straight white men do together when they are engaged in male bonding? They get drunk and stoned, watch heterosexual porn, and they talk about “pussy.” The ads draw heavily upon the model of adolescent  friendship, or the presumably meaningless and proto-sexual circle jerk. Nostalgic commentary  about being buddies or “bros” and sharing “legit” male bonding experiences constructs  dude-sex as a kind of sex that bolsters, rather than threatens, the heterosexual masculinity of the participants.  Only those who are man enough (e.g., “have the balls”) and “chill” enough will want dude-sex, or be able to handle it.

In his book Guyland: The Perilous World Where Boys Become Men, sociologist Michael Kimmel depicts “homoerotic” encounters between straight white men as developmental, or as a feature of a delayed coming of age process wherein the lives of straight white boys, from ages sixteen to twenty-six, revolve around binge drinking, repudiation  of gayness, homoerotic  hazing, casual sex, porn, and above all, the avoidance of adulthood. Kimmel’s analysis suggests that, as a feature of white male adolescence and young adulthood, performative homosexual or homoerotic contact is ultimately abandoned  as white men shift their attention to work, family, and ideally, cooperative adult partnerships with women (or gay men). And yet, most of the ads that appear in Casual Encounters are placed by adult men ranging in age from twenty-seven to thirty-five years old, many of whom express an arguably romantic sense of lost youth and a nostalgic yearning for hetero-masculine  sex with other dudes. Indeed, what happened to the circle jerks? While young white men in high school and college are more readily provided with institutional  contexts that facilitate dude-sex (competitive sports, dormitories, fraternities), adult dudes must find other channels for organizing dude-sex, and must work harder to recreate its mood, meaning, and ritual.

Given the ways that  sexual violence against women is woven through the culture of hetero-masculinity, it should come as little surprise that misogyny also registers within men’s expressions of desire for other men. That fantasies of raping women are easily incorporated into dude-sex is, perhaps, one of the clearest illustrations of its embeddedness within structures of heteronormativity, as distinct from gay male subcultures in which misogyny typically manifests as the invisibility, rather than the violent sexual objectification, of women.

But Who Are They Really?

Before looking more closely at the operation of whiteness in the ads, I feel compelled to briefly attend to the question of who these men are “in real life,” a question people frequently raise when I speak about this research. As I confessed earlier in this chapter, my initial reaction to the ads was that they had either been written by closeted gay men or by “real” gay men pretending  to be straight in order to satisfy a fetish for “real” straight men, or to mark their interest in particular masculine codes. These assumptions were fueled by my own default binaristic thinking at the time, as well as numerous stories I’d heard from gay male friends about their desire to seduce straight men—stories they told even as they bemoaned the hierarchy within gay male culture that glorified “straight acting” gay men. How can one be sure that Casual Encounters  is not a site in which gay men seduce one another vis-à-vis a compelling hetero-masculine  gender performance? Sexological survey research conducted  with straight-identified men who post ads for sex with men on Craigslist suggests that, in fact, these men quite commonly report actual heterosexual identification. But beyond this empirical substantiation, to claim with any certainty that these ads must be, or probably are, written by gay men commits the fallacy this book works against. To defer to this common suspicion is to foreclose the possibility that straight men do desire men in some of the ways expressed in these ads, and to disregard a growing body of research on straight men’s homosexual contact and the discursive context in which it takes place.

Similarly, some might argue that the ads placed in Casual Encounters are expressions of bisexual desire, and that a failure to highlight the bisexuality of str8 dudes reproduces  bisexuality’s persistent invisibility. Although I agree with the spirit of this concern, and while it is true that a few men who post in Casual Encounters do use the terms “bisexual” or “bicurious,” I also note that the broader  context of their ads almost always suggests that “bisexual” is a label they use in lieu of a sexual vocabulary to describe the homosexual sex of heterosexuals. Consider this ad, for instance, where reference to “bi stuff ” appears alongside “STR8” identification as a technical description of sex between two straight men:

As I have argued, the primary litmus for what counts as heterosexuality versus queerness should be the cultural and relational investments of the participants: That is, are their same-sex sex practices anchored within heterosexual culture and conceptualized through the logics of heterosexuality? Or are the participants’ sex practices shaped by queer ideas, queer subculture, and queer politics? Because I understand bisexuality as a mode of queerness, one marked by sexual desire that is not gender-specific (or that extends to masculinity, femininity, and genderqueerness), it would be troubling to conceptualize as bisexual the desires expressed in the ads, as their authors  have gone to great lengths to circumvent the imposition of this kind of queer meaning.

Excerpted from "Not Gay: Sex Between Straight White Men" by Jane Ward. Published by NYU Press. Copyright 2015 by New York University. Reprinted with permission of the publisher. All rights reserved.

Jane Ward is associate professor of women's studies at the University of California, Riverside. She is the author of "Respectably Queer: Diversity Culture in LGBT Activist Organizations."