The secret history of "cuckservative": The fetish that became a right-wing rallying cry 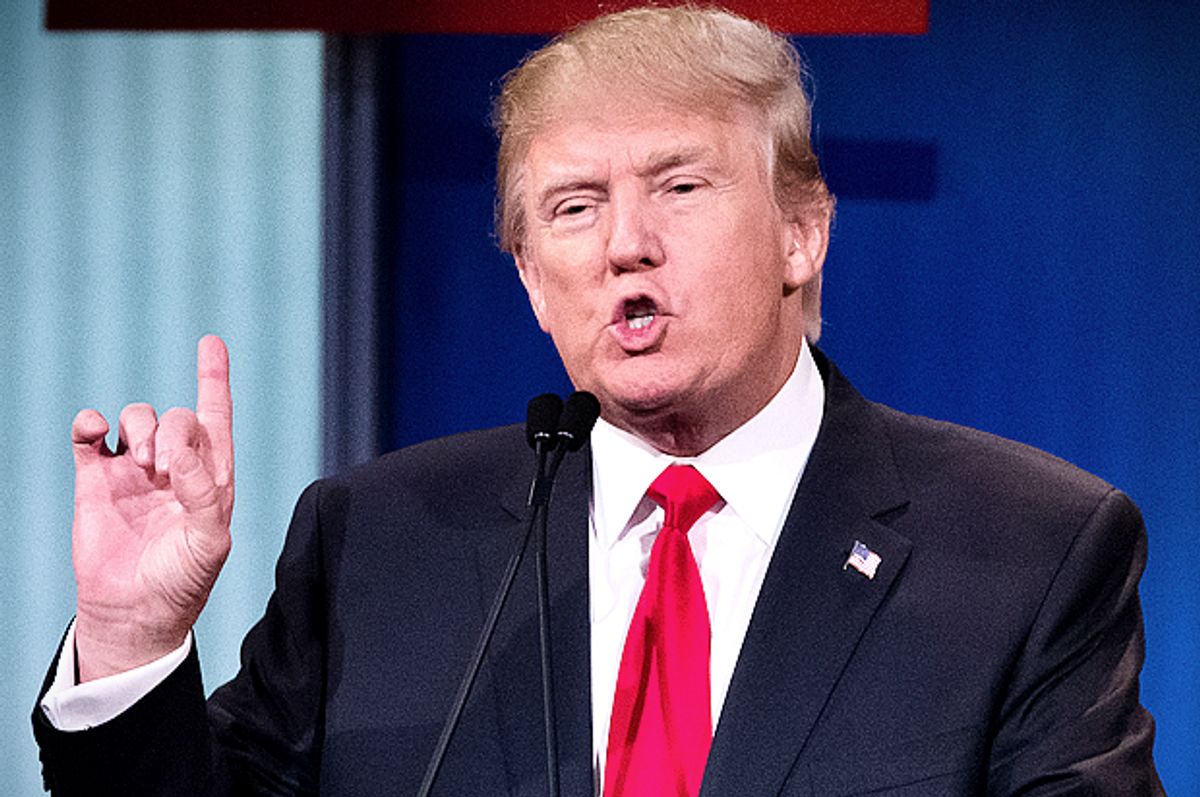 Humans are social beings. Humans invented politics in order to manage conflict and decide how resources should be distributed in society. It is almost inevitable then that politics would become a stage on to which we project some of the most basic -- and base -- parts of the self.

In a recent article at Salon, Joan Walsh did an excellent job in navigating the political effluence that is the American right’s newborn obsession with “cuckservatives.”

There, she noted how:

“Cuckservative” started showing up in my Twitter mentions last week, after I suggested Donald Trump supporters might not be the brightest bulbs. As I clicked around, I came to a shocking conclusion: I’ve been uncharacteristically downplaying the amount of racism and misogyny powering the right today. The spread of the epithet “cuckservative” is a sign that the crudest psycho-sexual insecurity animates the far right.

“Cuckservative,” you see, is short for a cuckolded conservative. It’s not about a Republican whose wife is cheating on him, but one whose country is being taken away from him, and who’s too cowardly to do anything about it.

OK, that’s gross and sexist enough already, but there’s more. It apparently comes from a kind of pornography known as “cuck,” in which a white husband, either in shame or lust, watches his wife be taken by a black man. Lewis explains it this way: “A cuckservative is, therefore, a race traitor.”

White supremacists have reinforced the racial intent of the “cuckservative” narrative. To that end, Walsh quotes one of their more prominent voices, Richard Spencer:

"The #cuckservative meme doesn’t make any sense without race. It’s all about race…What’s powerful about #cuckservative is that it is call for a racially conscious politics—and not the kind of shot-gun spray muckraking that Johnson specializes in."

But, as Walsh explains, usage the word hasn't been limited to white nationalist circles:

At present, “cuckservative” is just one more signal of how the contemporary Republican Party and movement conservatism have become a carnival-like human zoo fueled by the talk-radio echo chamber, one where extremism is now mainstream, and the politically adolescent and immature obsessions of “men’s rights” victimologists -- with their “alpha males” and “cuckolding” anxieties -- are considered reasonable and respectable points of view.

The convergence of white supremacy and conservatism in the modern Republican Party -- spurred in part by a renaissance of toxic white masculinity -- has produced what, in the moment, appears to be a series of never-ending climaxes and crescendos wherein new levels of absurdity and paranoia replace previous peaks once thought unattainable. The extreme has become the new normal for mainstream American conservatism. As the Republican Party continues its death-spiral embrace of fascism, misogyny, patriarchy, and racism, the political insanity embodied by concepts such as “cuckservative” will become the new normal.

The Daily Kos’ Chris Reeves, offers up a particularly sharp insight on “cuckolding,” “cuckservatives” and the right-wing political imagination:

But for the Republicans using the term #cuckservative, they are doing so out of a place that mirrors what represents the... darker shades of any fetish. Republicans who have used this new term are the same Republicans who used phrases like 'Sodomite supporter," "whores." In that vein, they are now using #cuckservative not just based on the defined sexual act, but for the much darker racial tones that prevail in the rise of pornography that is sold online.

“Cuckservative” is fascinating language. However, even as used by Republicans and others on the White Right, it is also inadequate and somewhat misplaced in capturing the pornographic imagination as a type of political logic for conservatives in the Age of Obama.

Cuckolding -- which, again, is a type of pornography in which men allow their wives and female partners to be sexually “used” by other men while in front of them -- is ostensibly about humiliation. As the Daily Beast noted in 2010:

Cuckolded men (aka "cucks") only observe their wives’ infidelities, they don’t participate. And that's why they find it a turn-on: They're left out, looking on as the woman they love climaxes with a better man than them. It’s a form of psychological sadomasochism. Some people get turned on by whips, chains, and physical pain. Cucks get aroused by mental anguish.

(Paradoxically, this genre also positively reaffirms white supremacy; in the interracial “BBC” scenario,the white racial frame's assumption that white women are desired above all other women is made explicit.)

So it is clear why the genre is popular: The combination of fetish and racial entitlement are, for a certain segment of white American men, an almost alchemical admixture.

But the internal logic of the “cuckservative” meme falls flat, because movement conservatives and the right-wing media -- even the ones who are now brandishing the term left and right -- are not titillated, as these porn enthusiasts are, by the perceived loss of power for white men. They are not in a state of political ecstasy from the thought that people who look like them may have to share more political and social power with people who don't. No, this camp of aggrieved and imperiled white men, drunk on toxic white masculinity, are terrified of their supposed status as “victims” in a more inclusive and cosmopolitan 21st century America. Whereas cuckolding has its foundations in eroticism, the term "cuckservative" has evolved from a related, but ultimately very different, psychosexual fixation: racialized castration anxieties.

White men saw themselves as the naturally dominant group in the United States from its founding to the present. The idea of white male privilege as “normal” and a given remains inexorably compelling -- especially to the “angry” and aggrieved white men who are the base of the Republican Party in the post-civil rights era.

The legacy of the South’s planter class -- the 1 percent its time, who profited from the blood of the slave plantations, work camps, tenant labor, sharecropping fields, and chain gangs -- is also seen in the contemporary Republican Party. When the Republican Party’s leaders and media elites talk about “makers and takers” and “lazy” American workers, when they wage war on the poor and the social safety net, what we're seeing is the new political economy of neoliberalism mated with the philosophical legacy of the planter class.

The Republican Party’s fetish for guns, its knee-jerk defense of white-on-black-and-brown police violence and abuse, and its theocratic Christian politics also have many wellsprings in the American South. The right's desperate efforts to control women’s bodies and reproductive freedoms are likewise a legacy and reminder of how white men’s power has historically extended to their (supposed) ownership over women’s sexuality and health.

Thus, white male anxieties spoken to by those who authored and circulated the “cuckservative” meme are really just evoking a misdirected feeling by some white men that they have lost political power and potency -- that they have been, so to speak, castrated.

If the Republican Party is a southern party, with all of the social, political, cultural, and racial baggage such a lineage entails, then the power and threat embodied by Barack Obama, the United States’ first black president, cannot be ignored. If the men on the white right are fearful of a loss of power -- be it through metaphors and analogies such as “cuckservatives” or more basic castration anxieties -- we cannot forget the (almost exclusively) Southern tradition of the lynching tree and the “strange fruit” it yielded.

The phallocentric, racist, and misogynistic obsessions of those on the White Right are reminders of how black men’s bodies were routinely burned, dismembered, how their genitals cut off -- all of these things while the victims of such white racial bloodlust were often still alive. The spectacular lynching and torture of black people was a ritual designed to remove Black Americans from political life and to reaffirm white power. The black body was and remains a threat; because of that fact, it has been subjected to gross and cruel disciplines and technologies of punishment and control in the United States and the West more broadly.

Obama’s election was unsettling for conservatives. It drove many on the White Right to conspiratorial and delusional thinking, such as “Birtherism,” and also stirred up other more “old school” types of white racism, because the idea of a black man in the White House, as the United States’ President and symbolic embodiment of American power, was irreconcilable with a Herrenvolk logic that views “real Americans” as white by definition and tradition. The right wing’s fears of changing racial demographics, the mating of conservatism and racism, and the Republican Party’s creeping fascism in the present meant that Obama, as well as his cabinet and other appointees who were female and non-white especially, represented a particularly potent threat to embattled and insecure toxic white masculinity.

If the anxieties and fears of those on the White Right who construct dream worlds of a pornographic imagination, in which white men are being cuckolded and are “victims” of interracial sexual domination, who need to elect an “alpha male” Republican for protection, then Barack Obama is the biggest “BBC” threat of them all.

There is no way to defeat psychological chimeras. In their cuckolding fantasy nightmares, the American White Right is fighting its own psychological demons and projections. Republicans cannot beat their own political-racial-sexual id into submission. The White Right can however chase those shadows into the public sphere, and by doing so further wreck the Common Good. The Republican Party’s priapism may be their pleasure and our undoing.