Stonewall is in our blood: How the new film's white gay hero is the latest effort to erase trans activists of color

Activists are calling for a boycott of Roland Emmerich's upcoming "Stonewall" 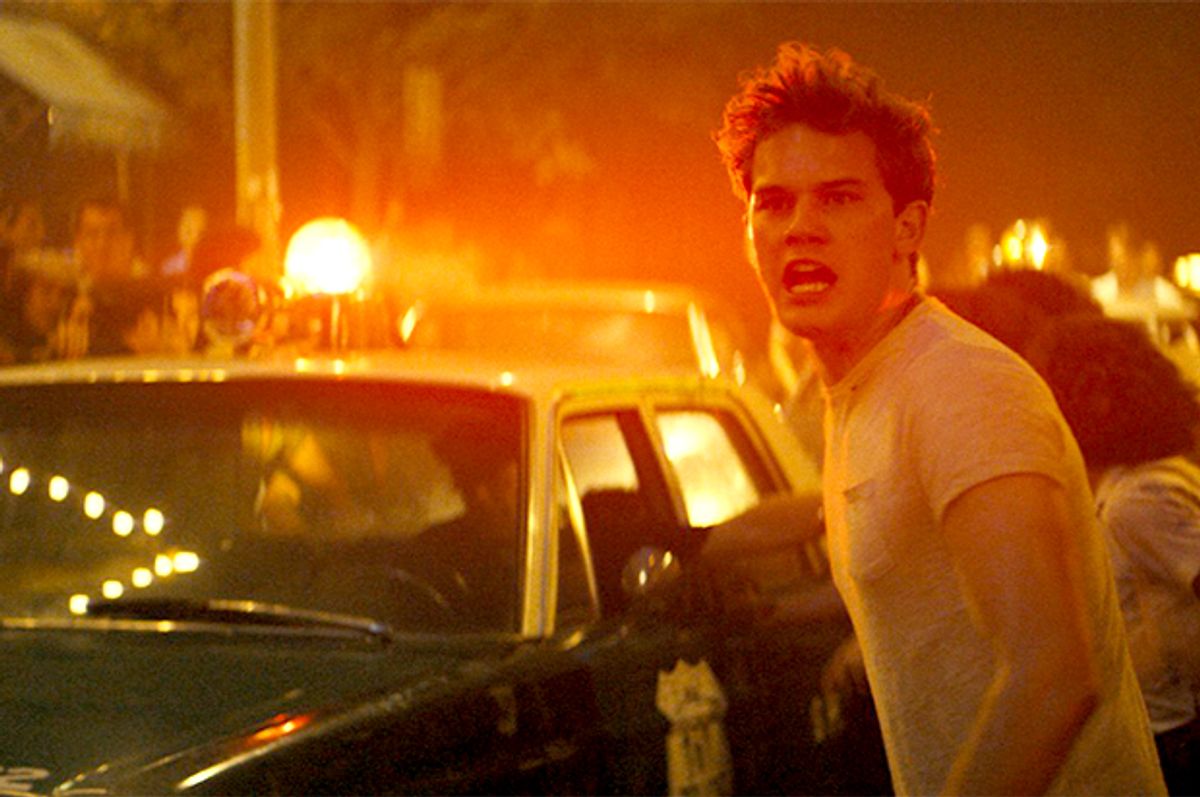 Imagine this: You are someone who has experienced discrimination or fear of your own identity (because you are gay or transgender, etc.) and there's no space to really be yourself. So, you decide to go to the Stonewall Inn, the sketchy mafia-run gay bar that often gets raided, but its patrons continue to attend en masse anyway. It's 1969. Imagine not being able to find a job, not just because you are gay or transgender but also because you are black or brown, and now, you have to go sell drugs or your body just to survive. Going to the Stonewall might be one of your only escapes from this horrid reality. The Stonewall might be somewhere you actually feel affirmed.

Now, you may have been arrested once or twice, for wearing the “wrong” clothing or for drug possession, or any other illogical reason the NYPD could use to throw you in the back of a paddy wagon with a bunch of your friends to take you downtown. But you go out anyway.

Imagine it’s a hot summer night and the police raid the bar, again. And instead of giving in, a crowd of people who normally would have gone into that paddy wagon stand up and speak out. They begin to yell and tell the police officers to go fuck themselves. The police officers stay in the bar, scared for their lives. A crowd swells outside, growing in numbers by the minute. This crowd is full of people who have been abused by the NYPD and are tired of giving in to the laws that say they are not allowed to be themselves.

Suddenly, the officers start barricading themselves inside. The patrons outside are growing like a wave about to crash against the shore of the bar. Their anger, their love for each other and willpower to change the world they live in reaches a critical point when a young brown transgender woman takes a bottle, stuffs a towel into the bottle, and lights it. She throws it towards the bar, where the officers have barricaded themselves in and tried numerous times to call for backup, where she had previously been arrested, where she had picked up tricks and sold drugs to her friends. She threw a Molotov cocktail toward the old world and lit afire hope for a new one to follow.

The Stonewall Riot, the historical event at the Stonewall Inn in 1969 described above — the "shot glass heard around the world" — was a real event led by queer and trans people of color (QTPOC), primarily trans women of color (TWOC) who had been harassed, attacked and abused by the New York Police Department for the previous decade or two. The NYPD abused its power against these communities with the most ridiculous charges. Police had a finger on the pulse of the Stonewall Inn and many other gay bars because the mafia ran and funded most of them. The uprising was a watershed moment in LGBTQ rights movement. And Roland Emmerich's new film “Stonewall” is a perfect representation of how white gay men have inserted themselves and taken over those movements that were started from the resistance of queer and trans people of color, especially black lesbians and trans women of color. “Stonewall” is the perfect representation of how white gay men have pushed out those same people who have given up their lives, liberty and freedom for the right to survive in a world that says we shouldn’t exist.

The Stonewall Riots were one of many that took place across the United States in the 1960s when queer and trans people of color stood up to the policing of their communities by fighting back against police. A riot took place at Cooper’s Donuts in Los Angles and Compton’s Cafeteria in San Francisco. It has also been speculated that more riots took place whose stories have been lost.

You’re probably wondering what this has to do with “Stonewall,” right? Our good friend Roland heard this story about the struggle, resilience and action taken by queer and trans people of color and was inspired to tell the story of a cisgender gay white man from a rural community who moved to New York and took part in the Stonewall riots. He was so inspired that he decided to center the trailer, and I assume the entire movie, which opens next month, on the gay white male perspective, including the organizing done by the Gay Liberation Front.

What isn’t talked about in the history of the GLF, or the history of our own modern day LGBT communities and movements, is that these movements and organizing would not be possible without the frustration, blood and jail time of queer and trans people of color, especially trans women of color. In fact, Sylvia Rivera, a Puerto Rican transsexual woman, even did most of the groundwork for the GLF and was then pushed out when white gay male leadership wanted to begin to wear suits and “assimilate” (a word that was used in strategic conversations and a tactic by the U.S. government to “kill the Indian, but save the man” since the 1700s). Emmerich's "Stonewall" movie seems to be the perfect artistic experience to capture this, since it erases most QTPOC from the cinematic experience inspired by history and any movement building that might happen.

I understand the passionate inspiring moment that the Stonewall Riots represent, and I also know that we shouldn’t romanticize the danger of the violent resistance of trans women of color — many of those women have been murdered by the police state and a society that refuses to let us exist. As a trans Latina woman, I have looked up to Sylvia Rivera, Marsha P. Johnson and Miss Major Griffin-Gracy since I first learned their names and their own respective roles in the Stonewall Riots. I understand how exciting it can be to learn of the action and fiery resistance that our community launched that night. However, it is not fiction, it is our history. This story is in our blood. Trans women of color have given up our freedom, safety and dreams to build the world that we live in today, and continue to be murdered in our push for a better life. What I can’t wrap my head around is why we need a fictional retelling of a historical event that doesn’t center on the communities that gave up so much to make it happen.

After the riots in the ‘70s and ‘80s, Sylvia Rivera stood up at a Gay Pride Parade and tried to talk about the struggles of being a trans Latina woman, sex worker, drug drealer and street queen. She was almost booed off the stage. She refused to leave. Instead, she took up the space necessary to share her struggle. This is me refusing to leave and take up the necessary space to tell you why this movie’s lack of representation of our communities is an issue.

Recently, an LGBTQ organization, GSA Network, started a petition to boycott Emmerich's "Stonewall." I think that we should direct our resources toward movies that are driven by and truly representative of the communities they are about. If interested, you can join the boycott here.

Side notes & more things to know

Where you can find historical facts about the people mentioned in this article and the Stonewall Riots:

(I want to acknowledge that Marsha was murdered in the late ‘80s or early ‘90s, which was never solved, and this had a deep effect on her good friend Sylvia, who struggled with alcoholism and died in the early 2000s fighting on her deathbed for a gender-inclusive employment non-discrimination bill for the State of New York.)