Dear White America: I know it's hard, but you have to acknowledge what's happening in this country

One year after Michael Brown was killed, we're finally talking about privilege. But we need to do even more 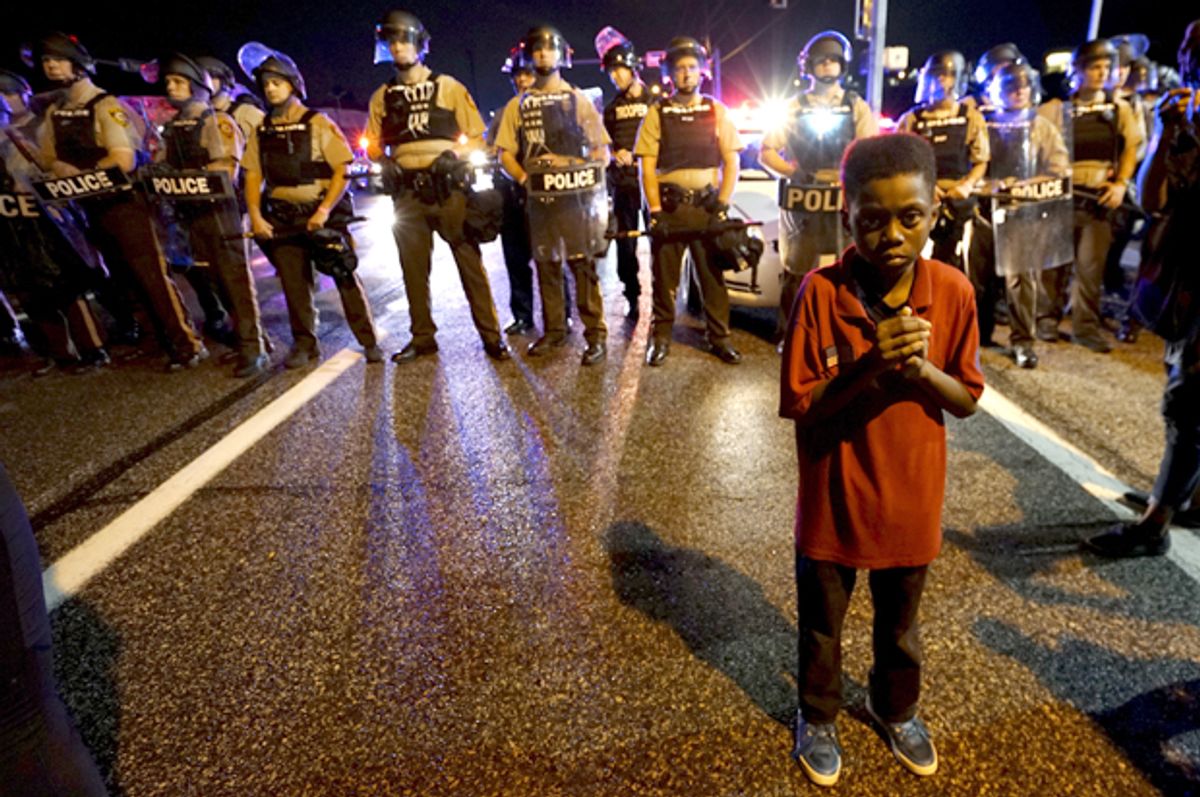 As we mark the one-year anniversary of the killing of young Mike Brown and the uprisings it sparked in Ferguson, much-needed conversations about race that have occurred as a result are increasingly on our lips and our smartphone screens. As an actress and writer who is black, and whose work often addresses race, I aim to contribute to the conversation, but today I’m pausing to do something I don’t usually do; I’d like to specifically address white people who continue to deny the existence of white privilege. Far too many of you refuse to simply state that white privilege is real, and I’m here to say something that might surprise you:

First of all, I’ve seen people angry about the moniker “white privilege” in and of itself, bemoaning the very existence of this annoying two-word phrase (and even more so the three words “check your privilege”) as nothing more than the verbal folly of the Outrage Committee and Social Justice Warriors who want to ruin the Confederate flag and gay jokes and everything good about America. I can understand the fatigue at the sheer amount of times we say the phrase—I even get tired of saying/typing it. But can you allow for the possibility that we’re saying it so much because you haven’t heard us yet and it’s crucial that you accept it as reality?

Some of you say we’re the confused ones; that when we speak of “white privilege” we actually mean discrimination or prejudice, that we should focus on the specific bad stuff happening to us instead of the good stuff we think you possess. Well, we’ve been trying that, and some of us think it’s not been working out so well.

Besides, white privilege and racial discrimination are neither interchangeable terms nor mutually exclusive ideas, and it helps to understand that so much “specific bad stuff” might not be happening specifically and disproportionately to black people without systemic privilege as America’s societal foundation.

Semantics work against us in this fight, because the word “privilege” has a traditionally positive meaning, conjuring up images of champagne wishes and caviar dreams, and the biggest obstacle for so many is that you feel you can’t experience white privilege because your own life is not “privileged.” Poor white people, and the rich white people who don’t care about them but seek to use them to bolster their argument, simply point to Appalachia and think the conversation is over.

The intersection of class and race come into play here, but white privilege cannot be dismissed as just a mangling of what is solely a class struggle; conquering structural racism will never come down simply to who has the most money.

You could be living in significant financial and social struggle, or you could just be one of the millions of Americans dealing with unemployment or living paycheck to paycheck, making ends meet but certainly not feeling “privileged.” I get it. Jay-Z has more money that you ever will, he’s married to the preternaturally talented and beautiful Beyoncé, Michael Jordan reigns supreme and you’re wearing his sneakers on your feet right now, and Oprah changed the world.

Meanwhile, you’re facing everyday ordinary challenges and possibly trying to keep your checking account on the right side of overdraft, and I have the nerve to call you privileged?

Yes. To add to those black luminaries, President Obama’s two terms in office are wonderful (to me, anyway), and symbolize progress, but the individual achievements of specific black superstars don’t disprove white privilege as a systemic ill. It would be reductive to say “the exceptions prove the rule,” but when you breathlessly point out exceptions in the form of rich black entertainers and athletes, you are agreeing that they are remarkable and literally exceptional.

Just as individual achievement does not disprove systemic oppression, nor does your individual innocence. Asking you to simply accept the reality of your privilege does not mean saying that you, personally, are actively or even consciously A Racist.

As a white person in America today, you may not have personally ever done anything “wrong.” You’ve certainly never owned slaves, and if you’re reading this, you’re likely not a member of an extremist white supremacist group. Yet you can be complicit in a system that is much larger than you without ever even knowing it, and your lack of initial awareness doesn’t excuse continued denial once it’s been pointed out.

Even “innocent” and well-intentioned white allies do themselves and the notion of racial equality a disservice if they persist in resisting the concept of privilege, but I can understand those who never even considered it. To be able to carry on day to day and not have your race impact your life to the point of reflection or critical examination is the very essence of the thing. Your privilege blinds you to your privilege in a sort of Russian nesting doll setup of exponential denial. Until you accept it.

As I’ve written here, “people who resist the truth of privilege feel [justified] because in a world where we constantly compare paychecks and skin color and scholarships and such, it’s difficult for them to comprehend that you could be benefitting from what you don’t have, what you don’t fear, what you don’t even know about.”

Our brains are not hardwired to accept absence before presence, potentiality before actuality, or theory over tangible evidence. This is why it’s difficult for many to understand that their white privilege manifests most often as what they don’t have, rather than what they do. It’s much easier to react to the word and say “but I’m poor!” than it is to imagine that you were born into a world where you’re the norm, the standard of perceived humanity from which others deviate.

Slavery was abolished, yes. But that’s not like suddenly flipping a switch to the “freedom and equality for all” setting. The heinously discriminatory practice of redlining carried on until almost 1970 and influences the racial composition of many American cities right now. When you suggest that we “leave the past in the past” or “move on” or “wonder why we “make everything about race,” I answer that we can’t move on through denial, and the hole dug by the horrors of the past is getting filled bit by bit, but it’s presently still a gaping hole that requires attention.

But neither are you! Not literally, anyway. So why must you be made to feel bad for things you had no control over, just because of the skin you were born in?

No reasonable person is asking that. White Guilt and White Tears are pejorative phrases because they do nothing to help the problems at hand, and you just feeling bad does nothing to help society. The message has been muddled by those who don’t truly understand it, but acknowledging white privilege is not about pointing the finger or making white people as a whole feel bad. C’mon. We consistently fight for the right to not be seen as a monolith. Why would we turn around and do it to you?

It is undeniable, however, that if you are a sensible person with empathy, accepting white privilege is going to make you feel bad, and no rational adult wants to feel bad. Furthermore, if you really look at it, you may feel powerless, adding to your reasons for wanting to deny it.

I get it. The exhaustion of hopelessness or feeling like you don’t know what you can do is a common emotional response to a negative shock. And it’s terrifying. I can only imagine the fear of having been living your life, probably thinking that you’re one of the “good ones,” not being racist, possibly not even thinking about race, only to be told one day that you’re actually a part of this system of oppression.

Such a terrible M. Night Shyamalan-esque twist ending must surely be rejected as a fabrication, right? Because if you accept it, you’ll replay your personal movie from the beginning and perhaps see where you’ve benefitted from this thing, unwittingly and completely unintentionally wielding it against someone else. “Oppressor” is a horrific word, and certainly not one that can be applied to you… right?

In response, you may want to lash out, to say that black people who speak about white privilege are using it as an excuse; that this country is all about the right to make anything you want to of your life. You may want to quote Dr. King. Please don’t.

America as a genuine meritocracy is a lofty goal and certainly far truer here than in other nations, but we’re not fully there, and your birthright in the majority must be noted as giving you a head start, as well as potential for greater ease in even the most mundane of experiences.

You could absolutely still have empathy for Sandra Bland’s death, but you have a far lesser chance of seeing yourself reflected in pictures of her face, and you don’t have the experience of logging on to social media to see that police brutality and systemic racism have claimed the life of yet another person who looks like your family, who could be you.

I have no interest in addressing the racially charged violence, death, or injustice of the day when so many persist in dismissing these near-daily occurrences as isolated incidents, magically unique to each day and not at all tethered to a larger power structure in America at play.

All I’m asking is that we can stand together and acknowledge the gaping hole of institutionalized inequality. From there, it’s up to you how you contribute (or don’t) to dismantling systemic racism and continuing the march toward that post-racial world so many of you speak of as though it’s already here.