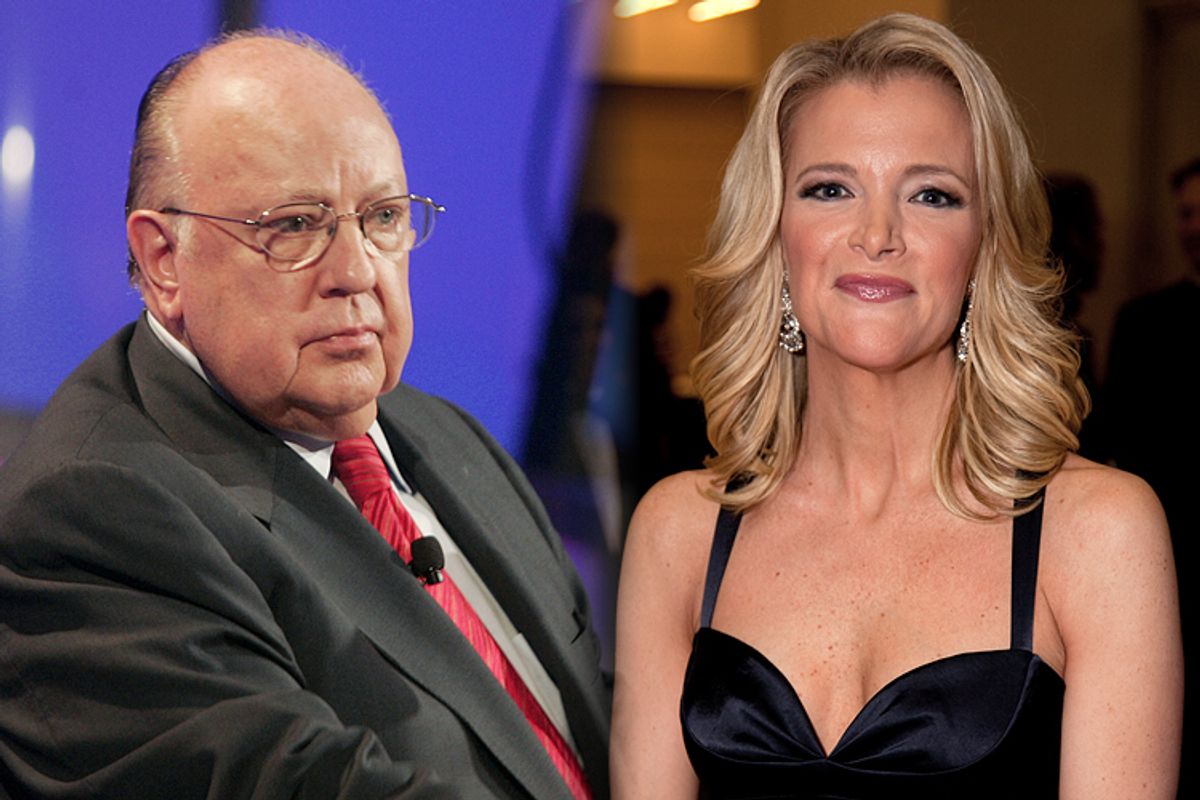 All may finally be well between Fox News and Donald Trump but the relationship hasn't been mended without casualties. According to a report by venerated Fox News observer, Gabriel Sherman, the network's head honcho had "all but sacrificed one of his biggest stars to appease the conservative base — a.k.a. Fox viewers" and Trump supporters:

Immediately following Thursday's debate, Fox was deluged with pro-Trump emails. The chatter on Twitter was equally in Trump’s favor. “In the beginning, virtually 100 percent of the emails were against Megyn Kelly,” one Fox source, who was briefed on the situation, told me. “Roger was not happy. Most of the Fox viewers were taking Trump’s side.”

Things got worse for Ailes over the weekend. In a phone conversation, Trump told Sean Hannity that “he was never doing Fox again,” according to one person with knowledge of the call. The anti-Kelly emails, and threat of a boycott by Trump, seem to have pushed Ailes to defuse the war. One Fox personality told me that Fox producers gave instructions to tell in-house talent not to bring up Trump’s controversial comments that Kelly had “blood coming out of her wherever" during the debate. According to one count, Fox only aired Trump’s comment once since Friday, while CNN mentioned it at least 50 times.

According to Sherman, Ailes had been "paralyzed by the volume of pro-Trump emails from Fox’s loyal viewers," going radio silence in the face of a barrage of attacks from The Donald directed at the network and more pointedly, at Kelly. And according to a new report today, Ailes appears to have instructed his vaunted press operation to stand down against the notorious grudge holder: (emphasis added)

For a few days, Ailes didn’t know how to handle Trump’s full-throated attack on Kelly, who accused Trump of sexism during the debate. Eventually, as I reported yesterday, he made the same choice he always does: follow the ratings, and mend fences with Trump. But that process has meant that Fox has had to mute its defense of Kelly, who is now watching uneasily as the Fox audience turns on her: According to one high-level source, Kelly has told Fox producers that she’s been getting death threats from Trump supporters.

But after Trump told Sean Hannity in a weekend phone call that he was “never doing Fox again,” appeared on four non-Fox public-affairs shows on Sunday, and did interviews withToday and Morning Joe on Monday, Ailes raised the white flag and picked up the phone on Monday morning. “Roger wanted a friendly relationship,” the source explained.

Sherman paints a picture of a desperate Ailes, panicked to get Fox News back into The Donald's good graces. "Ailes called Trump "multiple" times yesterday morning “begging” him to tweet out that they had made peace," Sherman reported:

There you have it, Fox's Golden Girl seems to have lost out to the Golden Boy of the moment as, Ailes, a craven ratings chaser made a calculated decision to stay with Trumpmania. After all,  Thursday night's debate did get the network it's largest ratings in history with a record 24 million  viewers tuning in to watch Trump debate nine other Republican candidates on Fox News. Ailes was reportedly in such a magnanimous mood that he "offered Trump the chance to do a special on Kelly’s prime-time show to clear the air — an offer Trump flatly refused."

Instead, Kelly barely took a moment out of her Monday evening program to briefly defend her debate performance while declining to respond to Trump. The "Kelly File" host has seen her Facebook page bombarded by Trump supporters encouraging a boycott of the network using the sexist hashtag, "BimboBarbie."

”I’m extremely proud of all of the moderators—they asked tough, important questions and did their job as journalists,” Ailes told Politico the morning after the debate and Ailes lawyer, Peter Johnson Jr., has denied Sherman's reporting. But perhaps Ailes lack of a strong defense for the anchor he once lauded as "instinctively right," might have something to do with what Kelly told the New York Times is "advice Mr. Ailes often gives her: Aim to hit singles, not home runs."

“We have very tough, pointed questions for these guys, but I am not trying to hit any home runs,” Kelly said before the debate. “I only want to advance the debate about the candidates. If we can flesh out some of the issues and some of their character and help the audience have a better feeling for who they are — as men and as candidates — then I’ve done my job.”