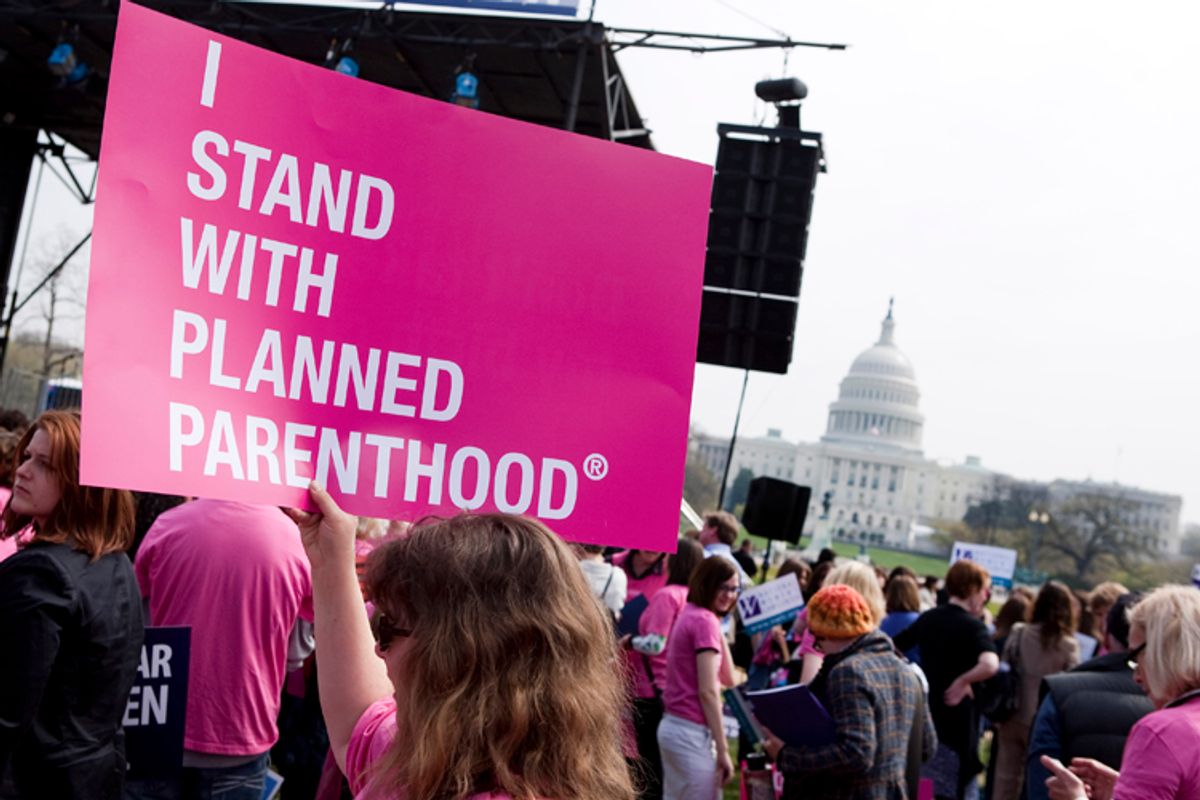 Senate Democrats have gone on an all-out offensive over Republican efforts to defund Planned Parenthood, launching a concerted campaign to target vulnerable Republican Senators who voted to defund the women's health organization.

A majority of voters in New Hampshire, Ohio and Pennsylvania said they would be “less likely” to vote for Republican Sens. Pat Toomey of Pennsylvania, Kelly Ayotte of New Hampshire and Rob Portman of Ohio if they supported a bill defunding Planned Parenthood, which has come under attack from conservatives after a series of undercover videos showed officials within the organization discussing the details of fetal tissue donation. All three Republican senators joined with their fellow Republicans to cut off federal funding for the women's health organization and abortion provider in a vote last week.

That vote, of course, failed to garner a veto-proof 60 vote majority in the Senate and now some of the most strident Senate conservatives (and Republican presidential candidates looking to gain attention) have vowed to tie another defunding effort to a larger vote to fund the federal government this fall, against the objections of Senate Majority Leader Mitch McConnell.

The Hill explains the DSCC's strategy of getting on the offense ahead of a Planned Parenthood witch-hunt fueled GOP government shutdown attempt:

The DSCC this week will launch a five-figure "GOP Shutdown Watch" campaign featuring Twitter and Facebook ads and rapid-response news alerts “highlighting the latest developments in the Republican push to attack women’s health and shutdown the government.”

The DSCC media push is also targeting Sen. John McCain (R-Ariz.), who has attracted a primary challenger, and Sen. Rand Paul (R-Ky.), who is running for president and senator simultaneously.

“Time and again, Republican Senators have voted to defund Planned Parenthood and other women’s healthcare programs, and now they need to answer if they will shut down the government to score cheap political points at the expense of women across the country,” DSCC National Press Secretary Sadie Weiner said in a statement.

The targeting of longtime Senator John McCain is of particular interest because if the Arizona Republican can survive a primary challenge, he'll likely face a woman challenger, Democratic Rep. Ann Kirkpatrick. And in the poll commissioned by Planned Parenthood, Pennsylvania Sen. Toomey came within the margin of error against an unspecified Democratic challenger.

Led by the women of the Senate, Democrats have been pushing back forcefully on this latest in a long line of attacks against Planned Parenthood. California Senator Dianne Feinstein noted during an impassion floor speech defending the organization that if Republicans were successful in defending Planned Parenthood, "Texas loses half of its remaining abortion providers in one fell swoop,” while her colleague, Sen. Barbara Boxer, blasted the group behind the undercover videos as an "extremist group." The leading Democrat on the Senate Health, Education, Labor, and Pensions (HELP) Committee, Patty Murray of Washington, vowed that “political attacks and threats to shut down the government aren’t going to get in the way of women’s access to the care they need.” And who can forget Sen. Elizabeth Warren's pitch-perfect response to the GOP's nefarious defunding efforts?

Although New Hampshire's two female senators were able to cross party aisles to join forces in an effort to protect pregnant women in New Hampshire from discrimination just last month, the two women are at odds over the funding of Planned Parenthood. Democratic Sen. Jeanne Shaheen has been a vocal opponent of what she described as "a attack on women’s health [that] is politically motivated and it holds hostage the millions of women and families who depend on Planned Parenthood." For her part, Sen. Ayotte voted against the last Repulican-led government shutdown but did support Senate Republican's latest attempt to defund Planned Parenthood.

On Monday, Democratic presidential frontrunner Hillary Clinton, who has strongly defended the organization after admitting she found the undercover videos "disturbing,"  blasted the “three men” on New Hampshire’s Executive Council who voted last week to defund Planned Parenthood in the Granite State, calling the vote a "disappointment":

It’s appalling that three men in the chambers of the Executive Council would deny women across this state the health care they need and deserve. It shows yet again why we need more leaders like Gov. (Maggie) Hassan and Sen. (Jeanne) Shaheen, who are willing to stand up for women, and just how out-of-touch and out of date Republican leaders are.”

And in the House, Minority Leader Nancy Pelosi has called for an investigation of the group behind the videos, the Center for Medical Progress, which she said was “trying to ensnare Planned Parenthood in a controversy that doesn’t exist.”