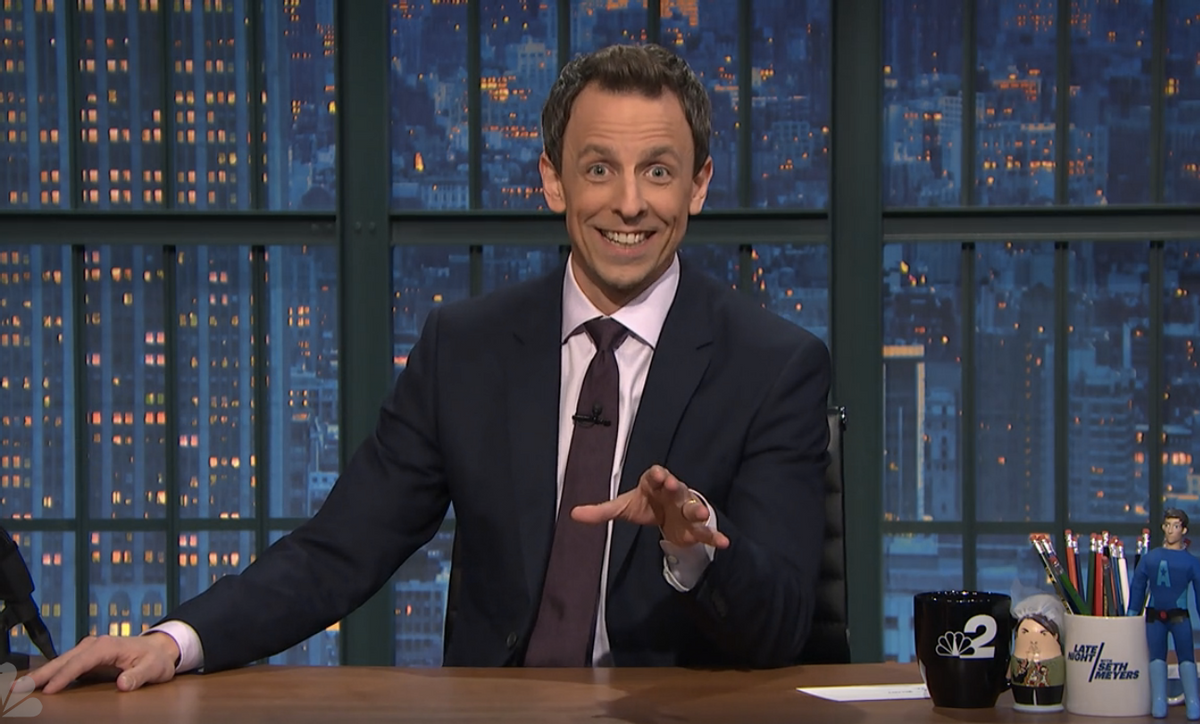 On last night’s episode of “Late Night With Seth Meyers,” instead of delivering his usual standing monologue, Meyers opted to deliver his opening political jokes from behind his desk, complete with projected graphics reminiscent of “The Daily Show” and “Saturday Night Live’s” Weekend Update, which Meyers used to host.

In an interview today, Meyers told the New York Times that he has long been contemplating a sit-down monologue, saying "I’ve always, obviously, been comfortable behind a desk. It seemed like it was time to give it a shot.”

“I’ve embraced the challenge of trying the more conventional late-night monologue,” he continued. “I felt like I’d had success telling jokes standing as well, be it at the White House Correspondents’ Dinner, the ESPYs or even doing stand-up. But I’m also aware that an hour before my show starts, Jimmy’s doing a classic monologue and he’s doing it very well.”

While the stand-up monologue has become an integral part of the talk-show format since the Carson era, Meyers never looked as comfortable on his feet as his time-slot predecessor Fallon, and always excelled more dry, sardonic register of fake news than in the corny showmanship of the standup monologue. And according to interviews with the Times and Variety, Meyers said he likely planned to stick with the seated format.

“The plan was to sort of use these next two weeks to experiment. We want to mess around with it. It felt really good last night,” he told Variety. “You don’t try to make too many decisions based on a sample size of one, but we’re going to keep doing it for the next two weeks.”

As late night talk-shows to continue to proliferate and new innovators step onto the scene, the competition for views — not to mention shares and clicks — is only intensifying. It makes perfect sense that Meyers would want to distinguish himself from the pack by finding the medium that best gels with his personality.

“At this point in time, everyone should be able to find a latenight show that suits their taste,” concluded Meyers. "Ultimately you just have to be true to what your own sense of humor is.”