One year after Ferguson, and with cops cracking down yet again, it is shocking how little has changed 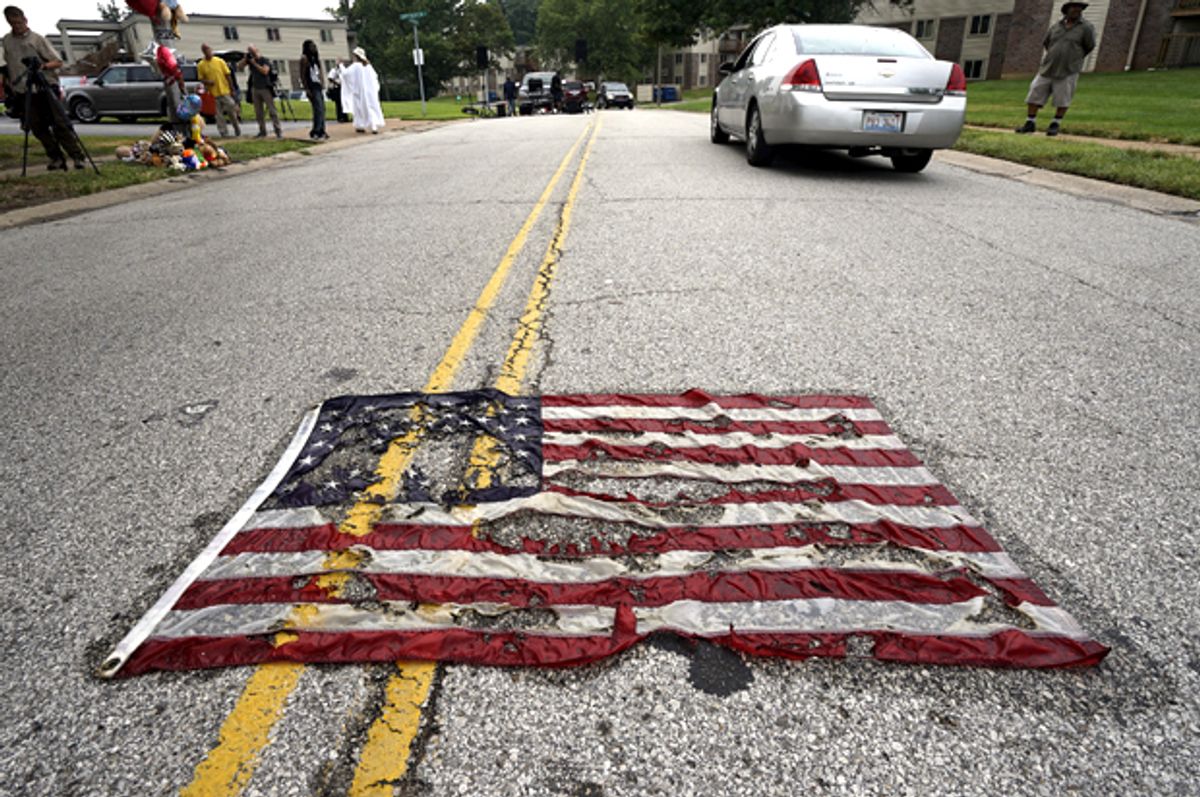 One year ago last night, the American public watched a spectacle unfold on the streets of Ferguson, Mo., which shocked even the most jaded among us. As cameras recorded street protests and vigils over the killing of 18 year old Michael Brown, they saw police rolling through the streets of this small American suburb outfitted in what appeared to be military style uniforms, armed with battlefield weapons, hardware and armored vehicles that they'd last seen in news reports from the streets of Fallujah back at the height of the Iraq war. They watched as police aimed loaded weapons at unarmed protesters while snipers rode on top of what looked like tanks. They saw reporters being swarmed by police and teargassed. This didn't come as huge surprise to writers like Radley Balko of the Washington Post, who had been documenting the ongoing militarization of American police agencies for years. But for the rest of the country, this was something they had never seen before. Why would a small-town police force be decked out in obviously expensive battle equipment?

That question was answered over the next several months as the media dug into the story of the militarization of police and how the federal government and military contractors had been making all this equipment available to America's police agencies. And we began to take a good look at how policing had changed from a "protect and serve" model to a battlefield model in which the cops performed more like soldiers fighting the enemy (also known as American citizens.) And once more a story as old as America was found at the heart of all this: the systemic official abuse of African Americans at the hands of police.

Street protests and candlelight vigils over a police officer killing an unarmed black man had been sadly commonplace in America's cities and towns for as long as anyone could remember. But the advent of video phones had already made the public more aware of the mortal dangers that black people face from vigilantes and police alike. The killing of unarmed 17 year old Trayvon Martin and subsequent trial of his killer had riveted the nation throughout the previous year and half. Videotape of Staten Island's Eric Garner being choked to death by police for selling loose cigarettes had circulated the month before. John Crawford had been shot down by police without warning as he handled a toy gun in a Dayton, Ohio, Walmart just four days earlier.

The Justice Department validated the grand jury decision in the matter of Michael Brown's death. But they also did a thorough review of Ferguson's police department and issued a scathing report revealing systematic racism at every level. Protests took place all over the country and a new civil rights and civil liberties movement called  Black Lives Matter became a national force to be reckoned with.

But as usual, a backlash formed as well. There was, as usual, the right-wing media's reflexive rejection of anything that resembles racial justice. And in the wake of the massive Eric Garner protests in New York, the police themselves reacted with petulant immaturity by turning their backs on the mayor because he warned his bi-racial son to be wary of police power.

Needless to say, the police are among the latter group. Wilson is in the latter group as well, although it's hard to see how a person could be given more than the power to kill and unarmed teen-ager with impunity, but perhaps he thinks he was denied the approbation he deserves. Luckily for him, the St Louis Police Association decided to mark the 1st Anniversary of Michael Brown's death by calling it Darren Wilson Day:

A post on the Columbia Police Officers Association’s Facebook page, which appeared on the one-year anniversary of the fatal shooting of black teenager Michael Brown by white Ferguson police Officer Darren Wilson, called Wilson “an innocent, but persecuted, officer.” The post included a message saying that support for Wilson has nothing to do with race. The author of the post said the police union supports Wilson because of “the fact that he was thoroughly investigated ... and found he did NOTHING wrong.”

Last night on CNN, Don Lemon hosted one of the more notorious of the police apologists, a former cop and spokesman for the St Louis Police Association a man by the name of Jeff Roorda. Asked about the anniversary of the Brown shooting, he said:

We've blown 365 days of missed opportunities talking about faux police reforms when we ought to be talking about how to make life better for these kids who live in this inner city setting, so hopeless and in such despair that they turn to violence and turn it more and more frequently against cops. Sometimes the kid dies and sometimes the cop dies but either way it's an unhappy outcome...We ought to be talking about the root issues and not distracting everybody in the country with this big lie. It started with the "hand up, don't shoot" myth.

Roorda has written a book called "Ferghanistan, The War on Police." He didn't seem concerned that comparing Ferguson to Afghanistan or framing the police as being at war with the citizens might not be the best idea under the circumstances. But if it is a war, the police are winning it.

Number of police officers killed by firearms in 2015: 21

Number of people killed by police since Wednesday: 24

So, here we are, a year after Ferguson. An 18 year old African American was shot two nights ago during protests, and is in critical condition. He has been charged with assaulting law enforcement. The county has declared a state of emergency and the executive in charge is saying they will not tolerate any more violence. Police arrested many people at various sites throughout the day and night on Monday, including nationally known activists. And just to make sure everyone know they aren't budging, the Ferguson prosecutor served summons letters to the two reporters the police illegally arrested last year while they were covering the protests -- just as the statute of limitations was about to run out.

For all the talking, all the negotiating, all the media, all the reports and all the "reforms" there is still a very long way to go. The people who are protesting and raising political consciousness seem to know that. The police seem to know that. It remains to be seen if the public is in for the long haul. One year later and it feels like Groundhog Day.