Stop the hand-wringing over campus PC culture: Corporations and the far right are a much bigger threat to free expression

What if we interrogated corporate media interests' impact on speech as much as we fret over comedian paychecks? 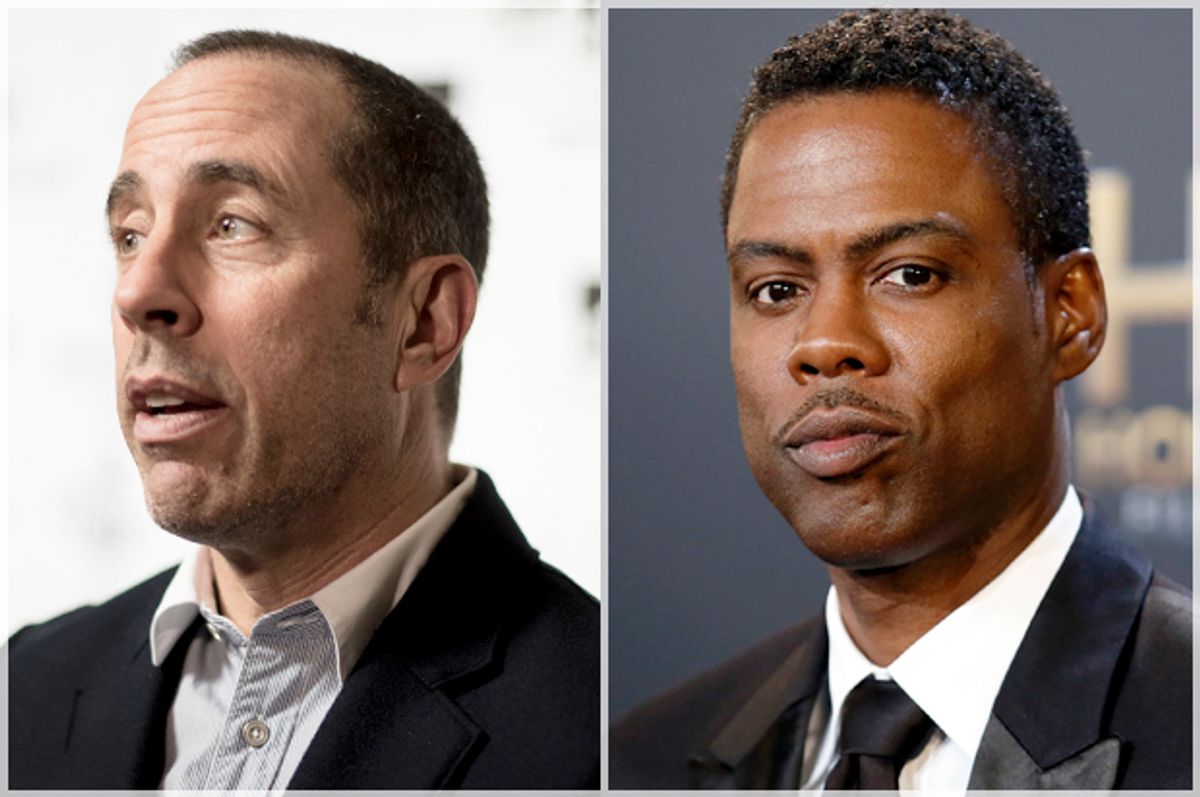 Everywhere we turn these days, we hear about the new wave of political correctness and the way the political left is blocking what people can write or say. Jerry Seinfeld and Chris Rock can’t tell jokes freely anymore. College professors can’t teach the classics because of over-sensitive students obsessed with race and gender. Donald Trump becomes a free-speech martyr when his invitation to a RedState event is rescinded because of his comments about Megyn Kelly. And so on.

Two new articles, from significantly different points of view, show just how strange a state we’re in these days. In The Atlantic, Caitlin Flanagan takes a look at the college comedy scene, and it’s not pretty.

Her story sketches a world that’s the mirror image of the one Seinfeld and other world-famous comics occupy: Instead of railing against the resistance their edgier material attracts, these journeyman comedians – gathered at a convention at which entertainers seek college bookings – play it safe. (“Better safe than sorry,” one says. “Don’t do what’s in your gut,” another offers.) Many of them avoid talking about sensitive subjects altogether.

Flanagan brings some disturbing evidence to the table here. You can be far from the libertarian right and still find the scene she sketches depressing. But Flanagan weirdly finds a way to blame these P.C. comics for the rise of race-baiting and other kinds of nasty behavior. After describing the way identity politics have made campuses ideologically rigid, she writes:

Meanwhile—as obvious reaction to all of this—frat boys and other campus punksters regularly flout the thought police by staging events along elaborately racist themes, events that, while patently vile, are beginning to constitute the free-speech movement of our time. The closest you’re going to get to Mario Savio—sick at heart about the operation of the machine and willing to throw himself upon its gears and levers—is less the campus president of Human Rights Watch than the moron over at Phi Sigma Kappa who plans the Colonial Bros and Nava-Hos mixer.

It’s been a while since I was in college, but even at the very liberal – and at times politically correct – campus I attended, the kind of behavior she describes here was very hard to find. Sure, P.C. could be annoying at times, but it was not spawning a bigoted backlash. And the racist chant unleashed by frat boys in March took place at the University of Oklahoma, not at left-leaning Wesleyan or Brown.

All of this makes it refreshing to be reminded that despite all the attention on P.C. from the political left, both sides limit speech in their own way. Catherine Rampell’s Washington Post piece argues that the right is the zealous at banning books as the left is at scolding comedians. She writes, regarding school libraries:

In almost every category, Republicans were more likely than Democrats to endorse book bans. That includes “books with explicit language” (bye-bye, “The Catcher in the Rye”); “books which include witchcraft or sorcery” (to the slaughter, “Harry Potter”); “books which include vampires” (night night, “Twilight”); “books that discuss evolution” (into the bin, Darwin); and “books which question the existence of a divine being or beings” (quit your squawking, Stephen Hawking).

And, she writes, "Literature wasn’t the only medium that Republican respondents said was ripe for purging, according to the Harris poll. Compared with Democrats, Republicans were also more likely to say that some video games, movies and television programs should be banned."

The important point Rampell doesn’t make is that while it’s not literal, classic censorship, the vast majority of speech (broadly defined) in this country is controlled by corporations. Whether we’re talking the centrist-apolitical CBS or the stridently reactionary Fox News, these gatekeepers and others like them are corporate owned. Same with radio. Ditto the big technology corporations that decide what rises and what falls online. Virtually every big company has a public-relations wing as well.

And a lot of the rest – most political magazines, for instance -- is controlled by billionaires. And corporations and billionaires spend millions on a kind of speech called lobbying – speech that skips the college kids and goes directly from a corporate lobbyists to the ears of our elected representatives. Comcast, for example, has “dropped $86 million on lobbying since 2009,” according to CNN.

Let’s not forget about the oil companies with their phony think tanks that deny global warming. Or that when Coca-Cola hires scientists to talk about the importance of exercise in beating obesity, they’re not doing it out of the goodness of their hearts. They’re doing it to let themselves off the hook for the sugary drinks they peddle: Instead of outright censoring, they’re hoping we’ll hear less about the health problems they’ve created.

For what it’s worth, I don’t dismiss the complaints of these comedians who’ve found the climate less open these days. Our cultural figures should be able to range widely in what they address in their work. But let’s not overlook the larger picture: The books our children read, the information we hear (and don’t hear) in corporate newscasts, the direct line from corporate offices to Congress – this is all more troubling than a bunch of college kids cramping Jerry Seinfeld’s style.