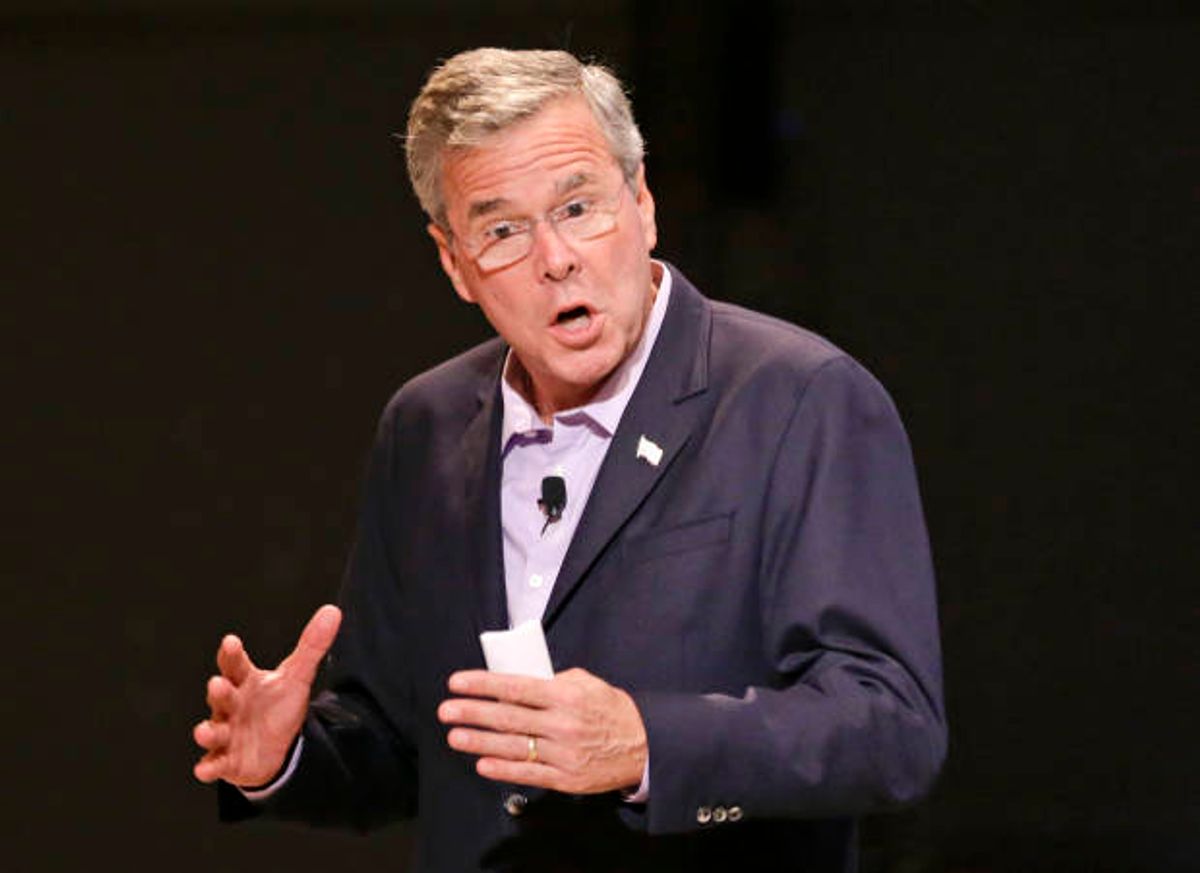 Jeb Bush visited the California shrine of Ronald Reagan yesterday to yet again "lay out his foreign policy vision." Like most candidates' laid-out foreign policy visions, it involves bombing people left and right, and, generally speaking, "standing up" to various unsavory characters across the globe so as to bring them to heel. By Standing. Grr!

Obama and Clinton lost Iraq, a country that some previous president -- name's something like W. Smush? -- invaded for no real reason. Jeb Bush absolutely loved the Surge, which turned Iraq into a quaint, peaceful nation of zero violence whatsoever, and is disappointed in President Obama for giving the country an opportunity to stand on its own legs instead of occupying it until the end of time.

Who can seriously argue that America and our friends are safer today than in 2009, when the President and Secretary Clinton – the storied “team of rivals” – took office?  So eager to be the history-makers, they failed to be the peacemakers.  It was a case of blind haste to get out, and to call the tragic consequences somebody else’s problem.  Rushing away from danger can be every bit as unwise as rushing into danger, and the costs have been grievous.

But that's all okay, because Jeb Bush is going to fix everything soonly with regards to this whole ISIS business. That's where the meat of the speech came in.

Bush's anti-ISIS strategy is a series of euphemistic descriptions of how he'll essentially escalate the wars in Syria and Iraq.

His goal in Syria, much like every candidate's or current sitting president's goal in Syria, is to simultaneously eliminate ISIS's presence there and oust Assad, replacing him with the Syrian Moderates, that grand Middle Eastern unicorn most popular in John McCain's imagination. "Under my strategy," Bush said, "the aim would be to draw the moderates together and back them up, as one force.

And we should back that force up all the way through – not just in taking the fight to the enemy, but in helping them to form a stable, moderate government once ISIS is defeated and Assad is gone.  It’s a tough, complicated diplomatic and military proposition, even more so than the current situation in Iraq.  But it can be done.

So unify all of the Syrian Moderates into a collective force backed up by pretty much every other country in the region, and have them simultaneously kick the asses of both ISIS and the sitting Syrian government. Indeed, that does sound like a "complicated proposition." The Obama administration has the same goal but hasn't found its execution particularly easy. That, of course, is probably because Obama hasn't Stood Up to Evil properly -- he sits down with Evil, likely with poor, weak posture.

There's another step Bush would take in Syria, though, that the Obama administration has not taken:

Fourth, we and our partners should declare a no-fly zone in Syria, and then work to expand that zone to prevent more crimes by the regime.  Enforce that no-fly zone, and we’ll stop the regime’s bombing raids that kill helpless civilians.  It could also keep Iranian flights from resupplying the regime, Hizballah, and other bad actors.  A no-fly zone is a critical strategic step to cut off Assad, counter Iranian influence, keep the pressure on for a settlement, and prevent more needless death in a country that has seen so much of it.

"Declaring a no-fly zone" is one of those things that casually falls out of hawks' mouths all the time, because it sounds so easy. All you do is "declare a no-fly zone," what's the big deal? Well, no-fly zones don't simply get "declared." They require establishing air supremacy. And that means an aerial war with the Syrian Air Force. Once air supremacy is established, then you provide air support for regime change -- something that Iran will simply allow to happen, I'm sure -- and then the Syrian Moderates take over and everyone is happy forever. Or this happens.

So American military backed regime change and ISIS-killin' in Syria. What about Iraq?

Jeb Bush is always interesting on Iraq, considering the history of his brother breaking the country and getting lots of people killed over there. He would do things that the Obama administration is already doing, like launching air strikes and supporting the Iraqi army and the Kurds. What about ground troops, though? Here's where Bush walks a most delicate line:

Third, we must make better use of the limited forces we have by giving them a greater range of action.  Right now, we have around 3,500 soldiers and marines in Iraq, and more may well be needed.  We do not need, and our friends do not ask for, a major commitment of American combat forces.  But we do need to convey that we are serious, that we are determined to help local forces take back their country. Our unrivaled warfighters know that it is simply not enough to dispense advice and training to local forces, then send them on their way and hope for the best.  Canadian troops are already embedded in Iraqi units to very good effect.  Our soldiers and marines need the go-ahead to do that as well, to help our partners outthink and outmaneuver the enemy.

So no "major commitment of American combat forces," but... we should "embed" American fighting forces within Iraqi units. Cute. But it also sounds ripe for escalation, as the American military likely finds that it would simply be easier to do all the fighting.

Jeb's anti-ISIS plan, being so hedged and euphemized, sounds less aggressive than that of many of his rivals. And yet it's so ambitious, and contains so many cracks, that it leaves various routes for mission creep to expand.

It's a good example of why last summer, more of an effort should have been made by the Obama administration and Democrats in Congress to draw up an AUMF explicitly laying out the parameters of the anti-ISIS war. If the next president is a Republican, and regardless of whether it's carefully-worded Jeb Bush or the self-described "militaristic" Donald Trump, the ISIS war will be expanded in unpredictable ways. And there will be little to no legal constraints holding that back.