Jeb's Iraq revisionism: His idiot brother wrecked the place, but it's all Obama's fault 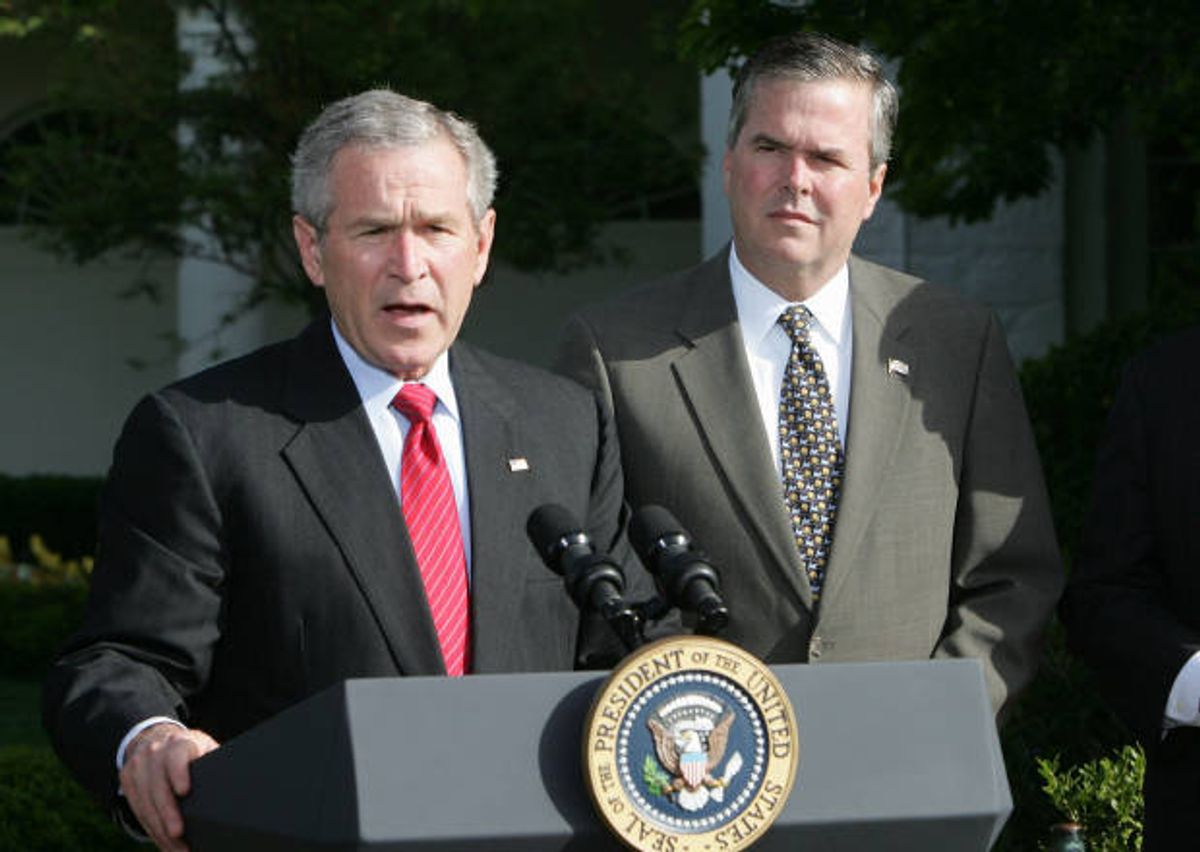 With the Donald Trump show still sucking up media and voter attention, other Republican candidates are searching for ways to break through the noise and make their presences felt. Some are attacking Trump directly to try and snag a slice of his spotlight, while others are carving out extreme positions on social issues. Jeb Bush, who slouched his way through last week’s debate, is trying to refocus attention on foreign policy with a big speech at the Ronald Reagan Presidential Library.

Jeb's had a rough go of it when it comes to foreign policy. After spending several days earlier this spring giving contradictory and evasive answers to the question of whether he would have authorized the Iraq invasion, Jeb was beseeched by his brother’s neoconservative pals to get his act together and start blaming Obama for everything bad that happened in Iraq. Jeb listened to their advice, and in last night’s speech he expanded the circle of blame to include Hillary Clinton:

So why was the success of the surge followed by a withdrawal from Iraq, leaving not even the residual force that commanders and the joint chiefs knew was necessary?

That premature withdrawal was the fatal error, creating the void that ISIS moved in to fill – and that Iran has exploited to the full as well.

ISIS grew while the United States disengaged from the Middle East and ignored the threat.

And where was Secretary of State Clinton in all of this?  Like the president himself, she had opposed the surge…then joined in claiming credit for its success … then stood by as that hard-won victory by American and allied forces was thrown away.

There’s nothing here we haven’t heard from Jeb before. Back in February he gave another big foreign policy speech, and in the question-and-answer session that followed he heartily embraced this idea that Iraq was “won” by the time Obama came into office. After deploying the passive-voice to gloss over all the grisly chaos his brother visited on Iraq – “There were mistakes made in Iraq, for sure” – Jeb offered a spirited hosanna in praise of the surge:

But my brother’s administration, through the surge, which was one of the most heroic acts of courage, politically, that any president’s done, because there was no support for it. It was hugely successful and it created a stability that, when the new president came in, he could have built on to create a fragile but more stable situation that would not have allowed for the void to be filled. The void has been filled because we created the void.

The Republican foreign policy platform of the post-George W. Bush era is built around this idea that we actually won the Iraq war before Obama came in and lost it. It’s a fabrication, and it was concocted by the same people who dreamed up the invasion in the first place so that they could dodge ownership of the disaster they created. It’s a fiction that gives false comfort to those who believe against all evidence that the United States can reshape the world through military power – a notion that almost every Republican presidential candidate subscribes to.

Peter Beinart wrote the most recent debunking of the idea that the surge “succeeded” for the latest issue of The Atlantic, making the critical point that the reduction in violence that conservatives and Republicans boast about today was not its primary goal:

The United States military bribed, cajoled, and bludgeoned Iraqis into multiple cease-fires. The Iraqi state was still broken; its new ruling elite showed little of the political magnanimity necessary to reconstruct it in an inclusive fashion. And the Band-Aids that Petraeus and his troops had courageously affixed began peeling off almost immediately.

This point can’t be made enough: the surge was not meant to just tamp down violence. It was supposed to provide Iraqi leaders the space and security they needed to achieve political reconciliation. The exact opposite happened: then-prime minister Nouri al-Maliki exploited the lull in violence to consolidate power and crack down on his political and sectarian rivals. If you argue that the surge was a “success,” you’re saying that the government we installed in Iraq was stable, healthy, and up to the task of running the country. That obviously was not the case.

Jeb was a full-throated supporter of the Iraq war, and he can’t really distance himself from it given that the strategic calamity of the Iraq invasion is, for him, a family heirloom. But by rewriting a bit of history and retroactively shifting a few goalposts, he can once again preach the virtues of the Bush Doctrine while chiding Hillary Clinton and Barack Obama for losing the war his brother “won.” Thus we’re left with a surreal and infuriating situation in which a member of the Bush family is accusing someone else of refusing to take ownership of our failed Iraq policy.